The opposition wants electoral reform and justice for those who died during a brutal government crackdown last year. 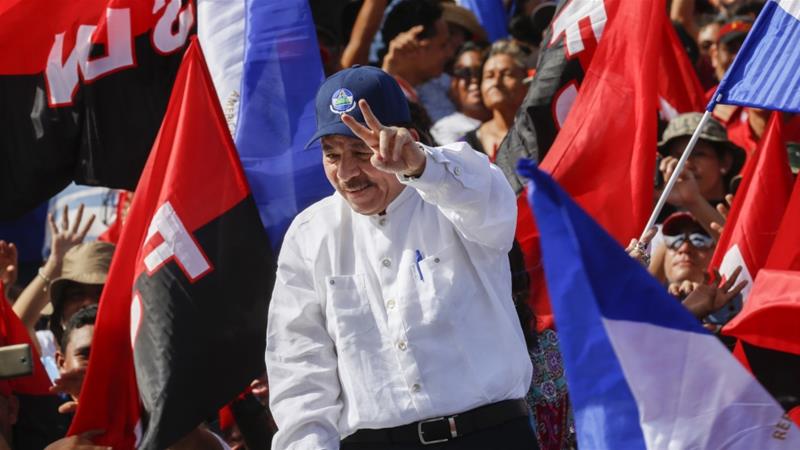 Nicaraguan President Daniel Ortega has said he would resume dialogue with opposition leaders who are calling for early elections, after nearly a year grappling with one of the country’s worst crises since a civil war four decades ago.

Ortega said on Thursday that the government is working to “set the table for negotiations next Wednesday” with representatives from the opposition, which is demanding his resignation.

An attempt at dialogue over welfare benefits last May erupted into protests that lasted for months, fading only under a brutal government crackdown that left at least 320 people dead.

Ortega made the announcement during an event commemorating the 85th anniversary of the death of guerrilla leader Augusto Sandino, to an audience of cabinet members, military personnel, the police and supporters.

It comes as the government faces an economic crisis and a $315m deficit, as it struggles without funding and loans that would usually come in from multilateral organisations.

Protests initially started last April over now-ditched pension reform, and escalated quickly as they were met by a brutal government crackdown.

“Nicaragua is experiencing one of the worst human rights crisis in its recent history,” Erika Guevara-Rosas, the Americas director at Amnesty International, told Al Jazeera.

Negotiations broke down in June as Ortega refused the opposition’s main demands to step down and bring forward presidential elections.

Protests lasted until October, which saw many dead and more than 750 people arrested on “terrorism” charges.

The Nicaraguan opposition accuses former guerrilla leader Ortega, in power since 2007, of establishing a corrupt dictatorship with his wife and Vice President Rosario Murillo.

Opposition leader Angel Rocha, who will speak for university students in the dialogue alongside business representatives and politicians, said their pressing demand was for Ortega to release people they consider political prisoners.

Rocha said the opposition would also push for electoral reform, transparent elections and justice for the people who lost their lives in the government crackdown.