They failed to make a breakthrough after a bitter dispute between EU countries wanting to turn on the spending taps and others who thought the bloc should tighten the purse strings to plug the €75 billion budgetary blackhole left by Brexit. Efforts were made to bridge the gap, but ultimately leaders decided it wasn’t worth continuing negotiations because of the vast differences in thinking. 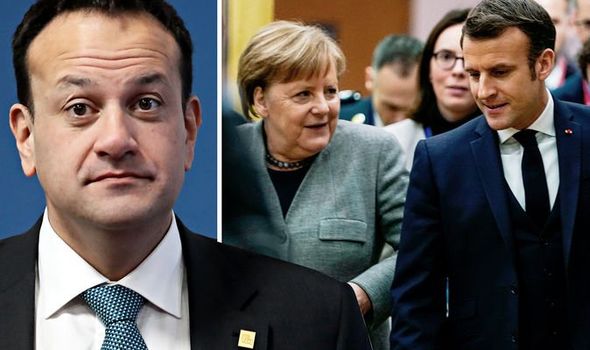 The mood was bleak as European Council President Charles Michel admitted the bloc “needs more time” to seal a deal on its trillion euro budget.

Critics say the EU’s most senior official failed in his preparations for the summit and tonight marks his first failure since taking over from predecessor Donald Tusk.

“We have worked very hard to reconcile the differences of interests and opinions around the table but we need more time.”

European Commission President Ursula von der Leyen added: “We need to continue to work hard, remain on the ball, as we have a long road ahead of us in order to reach a result.”

The chief eurocrat warned the bloc would be without funds for development, border protection and research if the EU27 cannot agreement an agreement on the budget by the end of the year.

The main battles were between EU countries willing to increase their contributions to Brussels to cover the lack of British funds and those who wanted to cut costs.

One final attempt to seal a deal lasted just 20 minutes, with just a few leaders taking the floor to reject the plans.

One EU diplomat said: “It became clear after the Frugal Four and Friends of Cohesion were not prepared to back the latest proposals that there was no chance of a deal.”

Luxembourg prime minister Xavier Bettel launched into a frenzied tirade after the end of the summit, attacking the so-called “Frugal Four” who refused to increase their EU payments.

He said: I” don’t see why we should cut down in order to give others a rebate.”

“My conception of the European project is different from the one put forward by Mark Rutte. I see the EU as a chance and not as a bill,” he added.

France vetoed the deal over proposed cuts to the EU’s lavish subsidies sent to farmers across the bloc.

President Emmanuel Macron insisted his country’s agriculturists should be made to pay for Britain’s departure.

He told reporters: “We refused a bad agreement on the Common Agricultural Policy – the CAP cannot pay for Brexit.

“If no agreement is found in the next few months the current system will continue.”

The Frugals – Sweden, Denmark, Austria and the Netherlands – wanted to see cuts to member states’ contributions in the wake of Brexit.

After an almost 18-hour standoff, Mr Michel agreed to address his original spending plans in a bid to break the impasse.

Earlier today, officals were ordered to find around €20-30 billion in potential savings to bridge the divide in opinions.

Eurocrats eventually managed to lower the initial 1.074 percent of EU Gross National Income offering to 1.069, but it was not enough for the thrifty nations looking to cut back on spending.

But the cuts left the EU’s net benefactors unhappy, especially with proposals to tie development funds to good behaviour.

After the summit, Mrs Merkel said: “We have realised that the differences are still to big to acheive an agreement.

“I have heard enough of red lines today, we have made a first try and it is still early in the year.”