HONG KONG/MACAU (Reuters) – Casinos in Macau, the world’s biggest gambling hub, reopen on Thursday after being closed for two weeks because of the coronavirus epidemic, but all punters and croupiers will have to wear a mask at the tables. 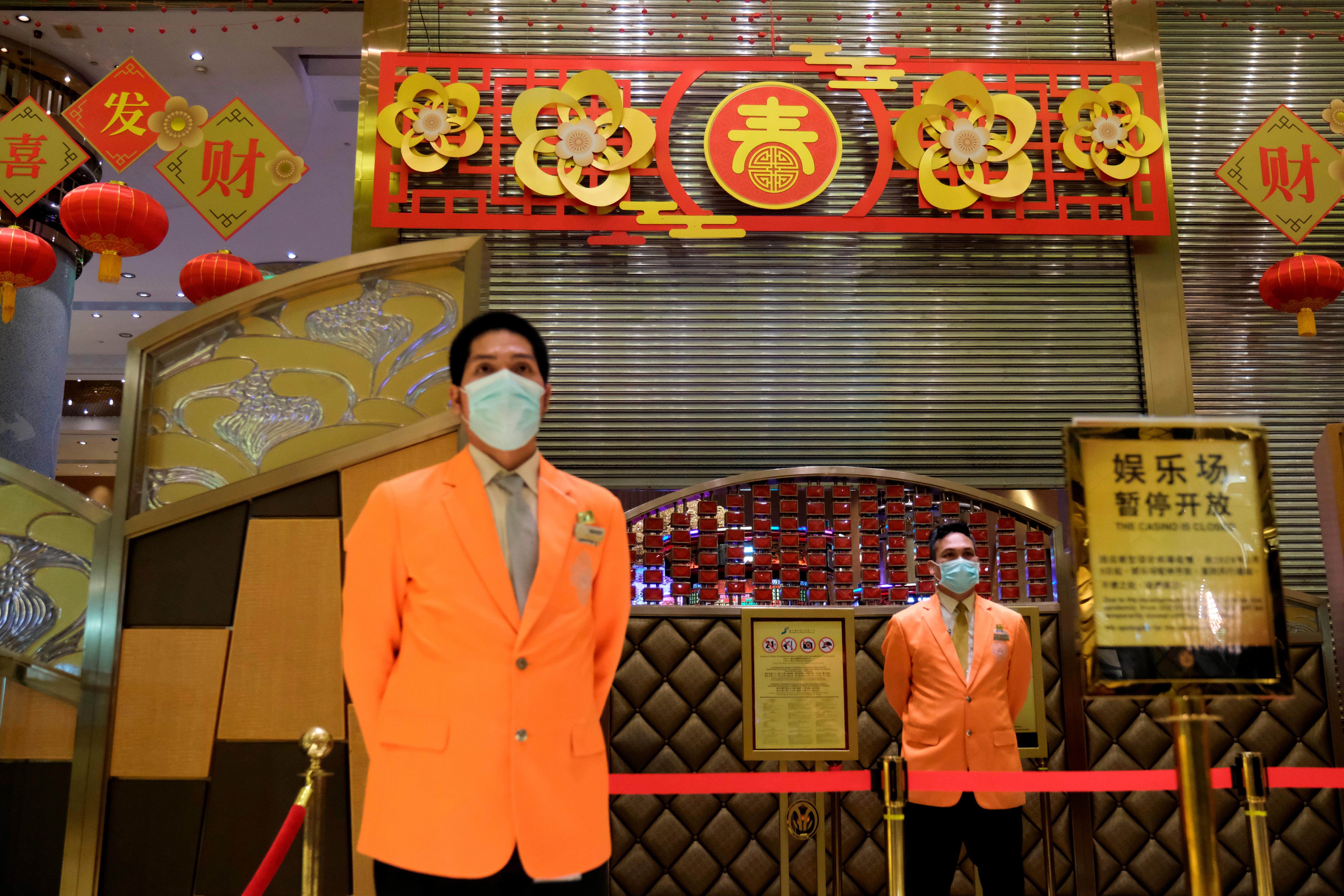 Casino executives and residents say revenue will remain badly crimped in the Chinese territory’s 41 casinos and the businesses dependent on them because of the health restrictions and strict entry regulations on tourists.

Macau makes over 80 percent of its revenues from casinos but tourist visits have all but dried up.

Authorities said last week the city was receiving around 2,000 daily visitors, a drop of around 98 percent year on year. The government has suspended an individual travel scheme through which visitors from the mainland gain entry and curtailed transport, including the cancellation of ferry services from neighboring Hong Kong.

The former Portuguese territory’s over 600,000 people are also mostly staying at home.

Casinos say they are bleeding between $1.5 million-$2.6 million on a daily basis to keep their staff on payroll and maintain contractual obligations.

The government this week gave the green light for casinos to reopen after a two-week suspension aimed at controlling the virus outbreak. But the gaming regulator has imposed strict rules for casinos including temperature checks, mask protection and health declarations for staff and guests.

Only half the tables on a casino floor are permitted to be open to ensure adequate distance between people. Patrons are not allowed to stand or congregate, according to a government notice. Each baccarat table, which normally seats seven people and dozens of boisterous onlookers, will only be allowed four players.

“It is wise to open a little bit, even if business is slow. The government wants us to open because it signals a sign of stability for Macau,” said a senior Macau casino executive who could not be named due to company policy.

Operators including Wynn Macau, Sands China, MGM China and Galaxy Entertainment said they will reopen in phases. They have 30 days to open fully according to a government mandate.

Analysts and executives predict that even with the reopening of casinos, gaming revenue will drop at least 80 percent in February and 50 percent in March year on year with the sector likely to take weeks to get back to normal.

“Business will likely remain extremely slow anyway amidst the restrictions on visas and transportation. Most Chinese players are probably unable or unwilling to travel at this point,” said DS Kim, an analyst at JP Morgan in Hong Kong.

Macau has reported only 10 cases of coronavirus infection and no new cases since Feb 4. On the mainland, more than 74,000 people have been infected and over 2,000 have died.

The special administrative region is China’s only location where casino gambling is legal and 90 percent of visitors come from greater China.

Mainlanders account for over 60 percent of the former Portuguese colony’s non-resident workers.

Nearly 30 hotels have shut down with shows, non-gaming attractions and most restaurants closed. Authorities have said entertainment venues including bars and clubs will continue to remain closed.

Hotel occupancy this month is around 12 percent versus 90 percent a year ago, according to official figures.

Macau’s government has pledged $27 billion patacas ($3.4 billion) to support domestic consumption but many businesses dependent on tourists and the casinos, from transport to catering, have been hit hard by the slowdown.

Taxi drivers say demand for their services has dried up while hundreds of bus drivers working for local travel agencies this week petitioned the government for financial support.

“After this whole virus thing, it is going to need at least three or four months of recovery time. Because we still have no tourists,” said Emily Smith, who manages a café a short walk away from Macau’s Vegas style Cotai strip.