Tamer Arafat, 23, died from his wounds after being shot in the head during Friday’s protest, Gaza health ministry says. 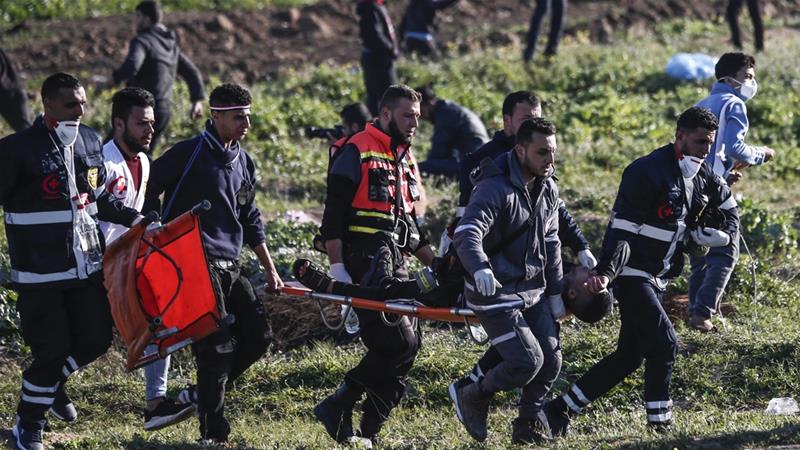 Israeli forces have shot and killed a Palestinian man and wounded more than 40 as thousands protested near the Gaza Strip’s perimeter fence, the enclave’s health ministry has said.

Tamer Arafat, 23, died from his wounds on Friday during the 50th week of demonstrations, said Ashraf al-Qidra, the spokesman for the ministry.

Qidra also said that 48 Palestinians had been wounded by Israeli gunfire, including four medics, two women and 15 children.

The Israeli military said over 8,000 Palestinians took part in the demonstration, throwing rocks and explosives towards soldiers, and that some tried to breach the fence into Israel.

A spokesman for the military said Israeli forces “responded with riot dispersal means and fired in accordance with standard operating procedures”.

Palestinians have staged weekly protests near the border with Israel as part of the Great March of Return protests, which began in March last year.

The demonstrators are calling for the lifting of an Israeli-Egyptian blockade imposed on Gaza since 2007 and for the right to return to their ancestral homes in Israel, as stipulated in UN Resolution 194.

Cross-border violence has increased in recent days with Israel’s military saying it had carried out air raids on a compound belonging to Hamas after explosives attached to balloons were launched from the coastal enclave towards Israel.

Egyptian officials, who have frequently brokered ceasefires between Israel and Hamas, have been shuttling between the sides to try to restore calm, a Palestinian official told Reuters.

According to the Al Mezan Center for Human Rights, 267 Palestinians have been killed in the Gaza Strip since March 30.

Of them, 190 were killed during demonstrations, including 40 children, two women, two journalists, three paramedics and eight disabled people.

Most of the Palestinians killed during the demonstrations were shot in weekly clashes, but some have been hit by Israeli tank fire or air raids.

Israel has accused Hamas of using the demonstrations as cover for infiltrations and attacks, but rights groups and Palestinians say the protesters have posed little threat.

However, Israeli Prime Minister Benjamin Netanyahu rejected the report’s findings, saying it was “setting new records of hypocrisy and lies, out of an obsessive hatred of Israel, the only democracy in the Middle East”.