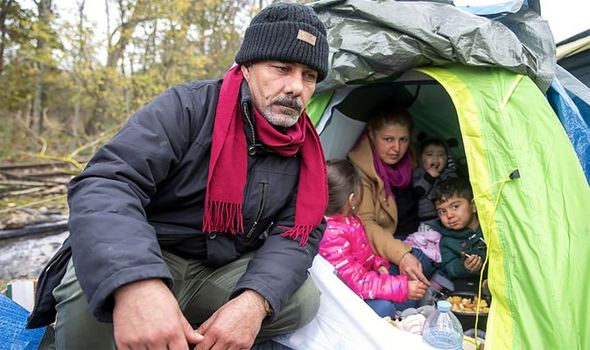 French officials confirmed that three children and a pregnant woman were among a revised total of 27 migrants who died when their flimsy vessel capsized.

Remains of the 30ft craft, inset below, revealed it to be little more than an outsized paddling pool – no match for the world’s busiest shipping lanes.

All the passengers were pitched into the freezing water on Wednesday when the boat’s engine failed and its thin plastic hull was holed, reportedly by a container ship.

Only two migrants – an Iraqi and a Somali – were pulled out alive.

Yet every migrant the Daily Express spoke to in northern France yesterday insisted they still planned to cross to the UK, paying people smugglers up to £6,000 each. A group of Afghans in the makeshift Grande-Synthe camp outside Dunkirk said they knew some of the people who had died.

Sardar Dhani, from Logar province near the Afghan capital Kabul, said: “A couple of the people on the boat were my friends.

“They were so nice… so young. One of them had green eyes, he was such a beautiful boy.They stayed with us for a couple of days, then he said he was going to go to the other [smuggler]. I was crying for them.”

Asked if he would still try to reach Britain, Mr Dhani replied: “We have no choice. We go or we die.”

Juma Gul Jabarkkhail, from Jalalabad, said: “Three of them, we knew them. They said there was a boat ready to go so we said ‘Good luck’. And we said goodbye.

“We heard they died. A friend of mine in the camp said he had a call from his family in England saying they had not heard anything.

“We are certain they were on that boat.

“Of course we will still try and go to the UK. Of course we worry – we have seen refugees from Afghanistan, Kurdistan have died. What could I do here? The only option is to go to the UK. What can I do? Life in England is better.”

Mr Dhani said one of the young dinghy victims had approached an alternative smuggler to speed up his bid to cross to the UK.

“The other one was not very fast, and [the smuggler] said he would take him quickly. He called me and said, ‘Please, you have to go with me.’ But I said I would not try the other smuggler.”

Mr Dhani revealed he had already narrowly escaped death with some of the group now thought to have perished.

They had to be saved from the Channel when their engine failed and waves broke over the vessel four hours into an attempt to cross to Britain last Friday.

He added: “But God gave us another chance.We were rescued by the French.

“The young boy who died was with us.

There were 21 people on that boat.We called the French police and they came to get us. It was so close.We did not know which way we were going.We lost our way.

“Then the engine broke and water was coming in and we got wet. I called the English police, but the network did not work.

“Another boy in the boat had a sim card from France. I called the French and they came and took us out of the water.

“Police had to help people who had swallowed water. All 21 of us nearly died.”

Another friend of the victims, who did not want to be identified, said: “The last time I saw them…we ate together.

“Everyone is so sad. If you keep a dog in your house, and the dog dies, you feel sad [but] these are humans we are talking about.

“This is very very bad.We came here from Afghanistan for a better life.”

French coastguards said desperate migrants are taking ever greater risks because the window of weather mild enough to attempt the perilous Channel trip is closing rapidly as winter wind speeds pick up.

Many of those who died on Wednesday were thought to be Iraqi-Kurdish. Investigators admitted yesterday they were no closer to finding the gangsters who organised the doomed journey.

Few of the victims had life jackets and most were thought to have succumbed to hypothermia in the water.

A Mayday call was made by French coastguards at Cap Gris-Nez near Calais.

The radio operator was heard giving out map coordinates of the capsize as they ask nearby vessels to help, saying around 15 people were in the water.

‘Of course we only option the UK. What Life in England Lifeboat volunteer Charles Devos was one of the first rescuers to reach the migrants. He said the moment he pulled six bodies from the water was like a scene from the sinking of the Titanic.

“It was a bit like the film Titanic when you saw all these people plunged into the water, drowning, with no means of being able to be rescued. Unfortunately we were only able to recover the dead people.” Rescuers believe the ill-fated dinghy left Loon-Plage near Dunkirk and collided with a ship at the limit of French territorial waters.

A fisherman sounded the alarm at about 2pm after he saw corpses in the Channel.

France’s Interior Minister Gérald Darmanin said none of the victims had passports or identity cards on them so police were not yet sure of their nationalities.

People traffickers often tell asylum seekers to destroy their documents, to make it harder for them to be returned from destination countries.

Investigators have warned that the death toll may change again – after falling from 31 to 27 – as more information becomes available, since no one yet knows how many people were on the boat when it sank.

But in the shadows of a disused warehouse in Grande-Synthe, hundreds more migrants last night huddled together in squalor – praying that their own expensive, dangerous chance to cross to a new world would not cost them their lives too.

Joint patrols would work in the Channel

The tragic loss of 27 migrants off the coast of Calais has prompted fresh calls for action on both sides of the Channel.

One proposal is to set up joint UK-French patrols aimed at saving lives and defeating the human smugglers. But is this feasible?

Operationally, I am confident that it is. I was Director of Ports and Borders in Canada when 9/11 happened.

We agreed a new arrangement between Canadian and US border agencies that gave officers powers to conduct cross-border operations, both along the 5,000-mile land border and also on the Great Lakes.

Then the issue was terrorism rather than migration but the principle was the same.

These Integrated Border Enforcement Teams worked hand in glove on their common border to enhance security for the benefit of communities on both sides.

There is ample provision in international law to conclude a similar agreement between the UK and France.

The relevant agencies on both sides could establish a joint command structure, which would deploy resources effectively both at land and sea to intercept migrants seeking to cross the border illegally.

Joint assets including surveillance technology could track and trace the migrants, regardless of whose territory they were found in.

Joint teams could be deployed instantly to intercept them. And any that did slip through could be returned instantly to France, where they can claim asylum if they so wish.

Politically, it is much harder. Ever increasing numbers of migrants are entering and remaining in the European Union.

Those refused a permit to stay there simply remain without authority, often moving from country to country in the borderless Schengen zone.

Many are drifting up to northern France and end up sleeping rough without any access to welfare, accommodation or support.

Those that see an opportunity to get to the UK will take it, notwithstanding the dangers involved.

This is fertile territory for the international organised crime gangs who exploit the migrants for financial gain with no regard for human life.

In order to stop the boats, the French government will have to convince their electorate that it is in their interests to do so, knowing that such action will primarily benefit the UK rather than France.

Time will tell if they really want to work with us on this.

If not, I fear that the smuggling gangs will only continue to profit – and more lives will be lost.