Amnesty urges Myanmar’s leader to release prisoners of conscience and drop charges against those facing imprisonment. 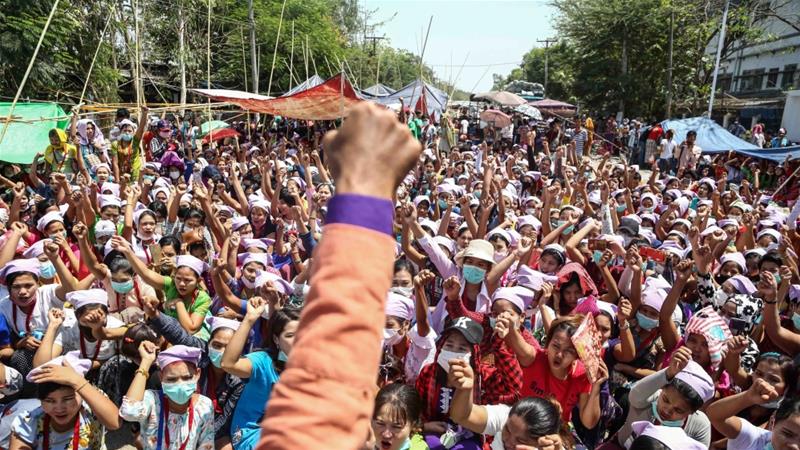 Myanmar’s leader Aung San Suu Kyi and her government have overseen the continuing harassment, arrest, prosecution and imprisonment of activists and critics since taking power four years ago, according to Amnesty International.

Those who have been arrested and prosecuted for “simply expressing their opinions” in the past 18 months include students, a poet, a journalist, a Buddhist monk, as well as environmental and labour activists, the prominent human rights group said on Monday.

In most of the 16 cases Amnesty highlighted, the complainants were soldiers who used repressive military-era laws to bring charges against people who criticised members of the armed forces, the group said, adding that the cases span nine states and regions across Myanmar.

“Four years after Aung San Suu Kyi came to power, Myanmar remains a country where the slightest criticism of the authorities can land you in jail,” said Clare Algar, Senior Director for Research, Advocacy and Policy at Amnesty.

“After campaigning for human rights for decades and paying a high price for their own activism, it is shocking that Aung San Suu Kyi and her colleagues have done so little to change military-era laws that are still being used to repress and punish critics,” she added.

Among those facing prosecution is Saw Wai, a poet who is facing two years for reciting a poem at a rally in April last year, in which he called for changes to Myanmar’s 2008 constitution.

“I only have my poetry as my weapon. I will fight with it … I will not surrender,” he told Amnesty.

Activists Seng Nu Pan and Paw Lu were sentenced to 15 days in prison in September last year after they organised an event to commemorate the resumption of armed conflict in Kachin and Shan states.

Lu was given a further three months on contempt of court charges when he protested against the verdict by handing the judge a pair of broken scales.

“For each protest, we submit a permission request, including the estimated number of people and slogans. Sometimes police tell us to remove words referring to the military. But no matter how we try to comply with their requirements, one way or another protesters are charged under the Peaceful Assembly and Peaceful Procession Law,” said Seng Nu Pan.

Abbott U Arriyawuntha Biwuntha, a Buddhist monk living in Mandalay in central Myanmar, is facing criminal defamation charges for criticising the military and accusing a senior officer of donating money to a hardline religious nationalist group.

“Religious leaders have a moral obligation to tell the truth and speak out against wrong doings,” said the monk who is currently free on bail while his trial continues. “By restricting freedom of expression, by silencing those who dare to speak out and criticise, the government and others in positions of power and influence can do bad things without consequences.”

“The government should work with civil society and labour activists, speak to them, listen to them,” she told Amnesty. “[This] oppression makes me work harder.”

Amnesty said authorities in Myanmar must immediately release all prisoners of conscience, drop all charges against those facing imprisonment solely for their peaceful activities and urgently amend or repeal the long-standing repressive laws used to jail activists and critics.