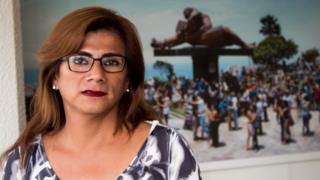 The top human rights court in the Americas has found Peru responsible for the arbitrary detention and rape of an LGBT person.

Azul Rojas Marín was stripped, hit and raped with a truncheon by three officers while in custody in 2008, her legal team said.

The Inter-American Court of Human Rights said it was an act of torture.

It is the court’s first ruling on a complaint of torture against the LGBT community.

Peru’s government has not yet commented.

There has been growing acceptance of LGBT people in Peru, but many still face legal challenges and widespread prejudice. Same-sex couples are not allowed to marry or enter into civil unions, but trans people can change their gender legally.

In February 2008, Ms Rojas Marín – who is now a transwoman but was then living as a gay man – was detained late at night and taken to a police station in the northern town of Casa Grande.

According to Redress, the human rights group which represented her, she was beaten, verbally abused for her sexual orientation and robbed of her belongings.

Ms Rojas Marín filed a criminal complaint against the police officers, but the case was dismissed by state prosecutors. Activists then took it to the Inter-American Court on her behalf.

The court was established by the Organization of American States (OAS), and hears cases of human rights abuses in Latin America. It can order governments to investigate crimes and compensate victims.

In the 12 March ruling made public on Monday, it said Ms Rojas Marín’s detention was “without a motive”, based on “discrimination”, and therefore was “illegal and arbitrary”.

“[Ms Rojas Marín] was forcibly stripped naked, beaten on several occasions, tortured and raped… constituting an act of torture against the victim,” the court said in a statement. “Consequently, the Court has declared Peru’s international responsibility for the violation of [her] rights.”

The court also said that in the country there were “strong prejudices” against the LGBT population and that, in certain cases, they are manifested in violent acts including by state agents.

The ruling ordered the Peruvian government to pay Ms Rojas Marín unspecified damages, provide her with psychological treatment, adopt new protocols for investigating attacks against LGBT people and track statistics of violence against the community.

Redress called the ruling “ground-breaking,” pointing out that it not only ordered Peru to redress the damage done to Ms Rojas Marín “but also prevent these crimes being repeated”, including providing training to state officials regarding LGBT rights.

Ms Rojas Marín said she had “no words to describe how I feel”. “After all that happened, a court finally believed in my word,” she said.