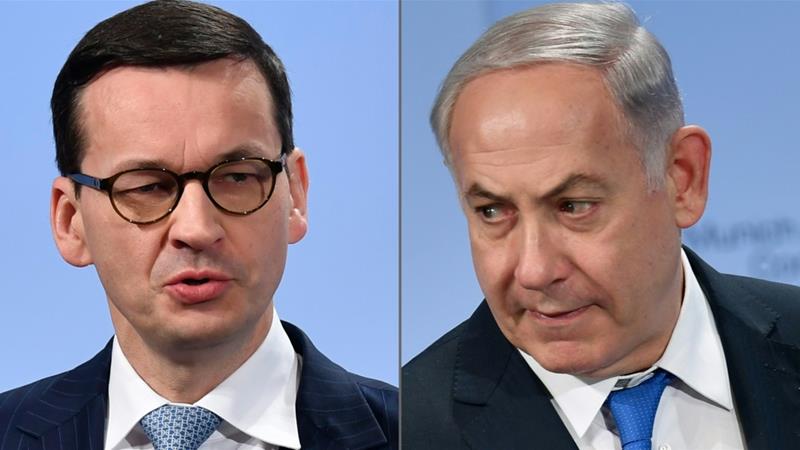 Poland is still awaiting an apology from Israel over its acting foreign minister’s comments on the alleged anti-Semitism of the Poles.

The argument led Warsaw to pull out of a key Jerusalem summit, according to Polish Deputy Foreign Minister Szymon Szynkowski.

Israeli authorities must “reject this declaration … and apologise”, Szynkowski told reporters on Tuesday.

“We leave it to Israeli leaders to choose what form of reaction they will have and who will react, but it should be a unified and definite one,” he said.

Israeli Foreign Minister Israel Katz said over the weekend that “Poles suckle anti-Semitism with their mothers’ milk” and that “there were many Poles who collaborated with the Nazis”.

Polish Prime Minister Mateusz Morawiecki withdrew from a summit of four Central European nations, the Visegrad group, in Jerusalem over the remarks.

Morawiecki’s chief of staff, Marek Suski, said if no apology was forthcoming “relations will really take a frosty turn”.

The first gathering outside Europe of the Visegrad Group was supposed to be a crowning achievement for Netanyahu in his outreach to Central and Eastern Europe to counter the traditional criticism Israel faces in international forums.

Orban was the only one to address the diplomatic crisis. He said he hoped the countries could resolve their dispute and “improve the situation”.

“It’s always better together with them than without them,” he said of Poland.

Standing alongside Netanyahu, Pellegrini noted with pride that more than 600 of his countrymen had been recognised by Israel’s Yad Vashem Holocaust memorial for saving Jews during World War II.

He claimed the figure marked the highest per capita proportion of any country.

Yad Vashem would not confirm the claim, but said any “statistical conclusions” about a country’s Righteous Among the Nations “should be avoided”.

The Slovak Republic was a client state of Germany in World War II whose leader, Jozef Tiso, collaborated with Hitler and deported Jews to Nazi death camps.

“The government did everything possible to round up all the Jews and send them to Auschwitz and Majdanek. There were a high percentage of victims in Slovakia,” said Efraim Zuroff, the chief Nazi-hunter of the Simon Wiesenthal Center. “Many people there idolise Tiso to this day.”

It’s a sensitive subject for Poland, where these concentration camps were located, but which for centuries before was a vibrant centre of Jewish life.

Poland was the first country occupied by Adolf Hitler’s regime and never had a collaborationist government.

Members of Poland’s resistance and government-in-exile struggled to warn the world about the mass killing of Jews, and thousands of Poles risked their lives to help Jews.

However, Holocaust researchers have also collected ample evidence of Polish villagers who murdered Jews fleeing the Nazis, or Polish blackmailers who preyed on the Jews for financial gain and stole their property.

Poland’s nationalist government has been quick to denounce anyone accused of linking the country to the well-documented history.

Israeli officials see Poland’s controversial legislation that criminalises mention of Polish complicity in Nazi war crimes as an attempt to suppress such discussion, and Netanyahu has faced criticism from historians in Israel for not opposing the law, which critics say distorts history.