As part of a historic visit to Iraq, Pope Francis has led prayers amid the ruins of churches destroyed by the Islamic State.

The Pope, who on Friday became the first pontiff ever to visit the war-weary country, traveled to Mosul, a city with 1,800 years of Christian history, on Sunday.

Mosul was the center of IS operations in northern Iraq from 2014 until its liberation in July 2017. During the occupation, several centuries-old churches located in Hosh al-Bieaa, or “Church Square,” were destroyed by IS.

“How cruel it is that this country, the cradle of civilization, should have been afflicted by so barbarous a blow, with ancient places of worship destroyed and many thousands of people — Muslims, Christians, Yazidis and others — forcibly displaced or killed,” Pope Francis told the crowd. 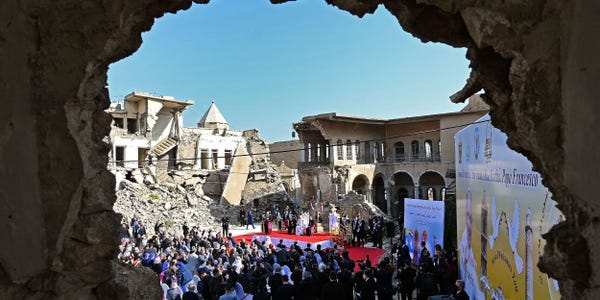 Over the past 40 years, Iraq’s Christian community has shrunk from around 1.4 million to 200,000, according to the Center for the Study of Global Christianity.

The exodus was accelerated by the 2003 Iraq war and subsequent rise of IS, which saw Christians widely persecuted. Arriving in Mosul in 2014, IS leaders demanded that Assyrian Christians living in the city must convert to Islam, leave, or face execution.

The ruins of one Mosul church, the Syriac Catholic church of al-Tahera, was used by the IS religious police as a tribunal, Anas Zeyad, assistant site coordinator for UNESCO in Iraq, said on Sunday, according to Reuters.

Speaking in 2014, Pope Francis made the rare move of supporting the use of force to stop IS militants from attacking Christians in Iraq but after his sermon on Sunday he released a white dove, a symbol of peace.

The Pope arrived in Iraq on Friday and on Saturday travelled to Najaf to meet with Grand Ayatollah Ali al-Sistani, the leading Shia Muslim spiritual leader.

He later visited Ur, an ancient city that believed to be the birthplace of the Prophet Abraham.

After reading prayers in Mosul on Sunday, Pope Francis also visited a church in the Christian village of Qaraqos, and is expected to travel to Erbil to hold a large-scale mass in the Franso Hariri stadium.