As Brexit deadline nears with no deal in place, NIESR says contingency plans would limit fallout. 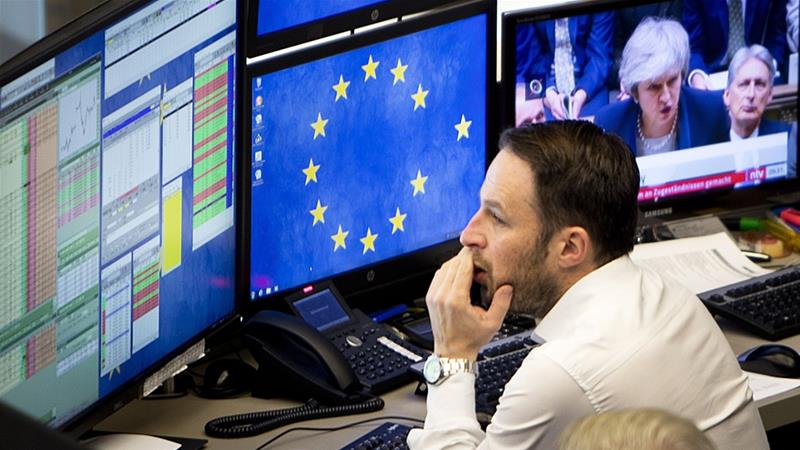 London, United Kingdom – As the clock ticks down on the United Kingdom’s pending divorce from the European Union, an influential British think-tank said on Wednesday that it was possible for Britain to avoid a recession should it crash out of Europe without a deal in place.

In its last quarterly forecast before Britain’s scheduled March 29 departure from the EU, the National Institute of Economic and Social Research, (NIESR) said that while economic growth would hover near zero in the two years following a no-deal Brexit, Britain could avoid sliding into recession if inflation and wage growth stayed in check and policymakers responded with measures to support the economy.

If Britain left the EU without a deal, trade between the two would revert to rules under the World Trade Organization.

Absent contingencies, the flow of goods and services would slow and in some cases be blocked, denting business and consumer confidence as well as economic growth.

“One way you could think about it, is the UK being completely isolated the same way that Iceland was isolated when the volcano erupted. There’s major disruption,” Amit Kara, NIESR’s head of UK macroeconomics and one of the authors of the report, told Al Jazeera.

“That’s the extreme version. The scenario we’re painting is one where contingency measures are activated,” Kara added.

These measures could include the Central Bank injecting liquidity into the banking system and establishing swap lines with other central banks, the rights of UK and EU citizens remaining protected, air transport continuing to operate unhindered, and truck drivers continuing to work and transport goods.

The UK and the EU have said they would activate some of these contingency measures in case of a no deal.

“There will be disruptions. We’re just suggesting that it’s not catastrophic,” said Kara. “Provided contingency plans are activated and the Central Bank and the fiscal authority inject stimulus into the economy, which we expect they will, [our projections show] the economy does slow down but doesn’t absolutely collapse.”

Uncertainty has intensified as Brussels and London remain locked in a standoff over Britain’s withdrawal agreement, which the British parliament voted down on January 15 in a landmark defeat for Prime Minister Theresa May.

NIESR noted that heightened Brexit uncertainty combined with slowing global growth has caused the UK economy to lose momentum since its last forecast. The institute is now predicting that the UK economy will grow by 1.5 percent this year, as opposed to its previous estimate of 1.9.

That forecast is predicated on a soft Brexit in which the UK and EU strike a deal to maintain a high level of market access for goods and services to each other’s markets during and after a transition period.

NIESR noted the slowdown in Britain’s economic activity was happening “in the context of record levels of employment, rising wage growth and public finance data that continues to surprise to the upside.”

The Bank of England warned in November that a no-deal Brexit would lead to an immediate economic crash, with gross domestic product (GDP) falling by eight percent and unemployment rising to 7.5 percent from 4.1 percent. These forecasts were criticised by some economists as too gloomy.

Kara is eager to clarify that contingency plans “are at best mitigating.”

“They’re not going to prevent or stop the long-term adjustment to a lower level of GDP,” he said. “In the long run, we do believe the economy will be damaged.”