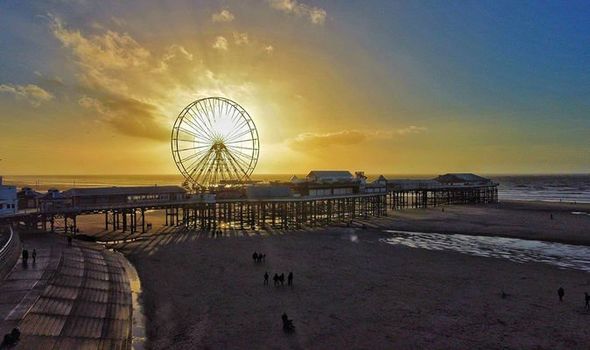 Stunning seaside sunsets at Durdle Door, Dorset, are being replaced by torrential rain and gales as polar air sweeps across from Canada.

Temperatures will fall as low as 4C (39.2F) in Scotland and 8C in England, but the wind chill will make it feel far colder.

And much of the UK will shiver as the mercury plummets below zero tomorrow night, the Met Office has warned.

Yellow warnings are in place for much of Scotland and parts of northern England.

Today will start with showers, accompanied by strong winds that will last until tomorrow.

“In combination with winds gusting 50 to 60mph, perhaps 70mph on exposed summits, temporary blizzard conditions and some drifting of snow on higher level routes is likely.

“Gusts of around 70mph on exposed coasts will generate some large waves and dangerous coastal conditions in a few places.”

Adding to the battering, forecasters issued flood warnings yesterday for parts of Herefordshire and Shropshire.

Alerts include the river Lugg, south of Leominster.

The Environment Agency said river levels remained high and flooding of roads and farmland was expected for the next couple of days, including Shrawardine, Shropshire, and on the Welsh border.

British Weather Services meteorologist Jim Dale said: “The unusually mild weather is not going to last and we are going to pay for it as we go back into a wintry situation.”

The Met Office’s Simon Partridge added: “It’s definitely going to turn colder and could hit the exact average temperatures for this time of year. It’ll be a big difference compared with the very mild conditions we’ve seen over the last few days.

“It’ll feel colder than the predicted temperatures, which will be around eight or nine degrees.”

The UK Health Security Agency has urged people to check on vulnerable neighbours in coming days, including the elderly and those with serious illness.

Agency consultant Agostinho Sousa said: “Cold weather can have a serious impact on health, particularly for older people and those with heart and lung problems.

“It increases their risk of heart attacks, strokes and chest infections.”

Bookmaker Ladbrokes has cut its odds on this being the coldest January on record to 2/1, down from 5/2.

Ladbrokes spokesman Alex Apati said: “There is an increasing chance we will all be wrapping up and strapping in for a record-breaking cold January.”