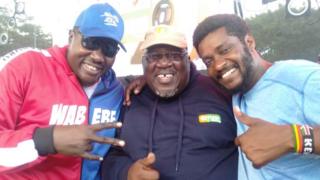 Charles Bukeko, who died earlier this week aged 58, helped transform the acting profession in Kenya. The BBC’s Ferdinand Omondi, himself a former actor, looks back at his career.

In Kenya, a pot belly is humorously used as a measure of success, while a watchman is one of the least well paid jobs.

Papa Shirandula, played by Charles Bukeko, was therefore a paradox – a pot-bellied watchman.

So beloved was that TV character that Bukeko, seemed to morph into it. Even now, he is affectionately referred to as Papa.

In real life and on the screen, Papa shook when he laughed, the gap between the teeth flashing infectiously and forcing a smile at the very least from anyone watching.

Yet his character also exemplified the stigma associated with the job of a security guard in Kenya.

In the long-running series of the same name, Papa Shirandula lied to his wife that he had an office job. He would leave the house in a dark suit, bright shirt and unusually oversized tie, striding his way out of the house and whistling.

But the moment he was out of sight he would jump into a bush, change into his shiny maroon suit whose buttons and stitches threatened to pop, then cycle off to his job as a security guard.

His big, round body would sink into a chair a third of his size, and legs apart, he would launch into non-stop gossip with Njoro (played by Kenneth Gichoya), a buffoon of a casual worker who almost always landed him in trouble.

Papa’s wife Wilbroda was a pesky and demanding personality, and their daughter Naliaka an ambitious, modern girl with big dreams.

These colourful characters among others made for hilarious comedy episode after episode – whether Papa was struggling to make ends meet with his meagre wages and lavish desires, or impressing a village girl with fancy wordshe could neither understand nor properly arrange in a sentence.

The actor who played Jalangó once revealed that they barely needed a script. All they needed was a plot, and then the lines would flow.

In fact, this cast performed so consistently well that their characters became real-life alter egos.

With Coca-Cola, it was a 2007 advert now known as “Brrr”, from the sound Papa makes after sipping the cold drink and trembling in satisfaction. He also starred in a campaign for the 2010 Fifa World Cup.

Then the floodgates opened. From multinationals to Kenyan start-ups, Papa was in demand.

With new opportunities came more money, and he was almost always cast as “Papa” as the character had cachet.

Soon his sitcom co-stars started reaping the fruits too.

Suddenly acting was no longer a low-paying job, a career stand-by or an afterthought after failing to land a permanent contract in media.

Acting became a respectable profession in Kenya and opened doors to careers in the media industry.

Jalangó, real name Phelix Odiwuor, says he got his nickname from his role in the Papa Shirandula show. It was Papa that gave him the moniker.

Today Jalangó is a household name – an in-demand radio presenter and MC who cannot stay out of a job. And he is a millionaire entrepreneur through his media production company, Arena Media, which hosts festivals and corporate events.

It is no longer strange to see an actor in a Mercedes-Benz or owning property in Kenya.

Most of the Papa Shirandula cast say they won their roles thanks to recommendations from Charles Bukeko himself, with whom they used to hustle at the Kenya National Theatre.

Nearly all have since become familiar faces in Kenya, gracing commercials, hosting radio shows and making millions in the process. Acting is now a career to be proud of, and Papa can take some credit for that.

Several other TV comedy characters have similarly branched out.

I played was a TV character in long-running high school drama Tahidi High, before heading into journalism.

Others have remained successful in acting careers, as performers or producers and directors.

‘Tomorrow is not promised’

We all admire Papa as the icon who demonstrated that you can build a successful career out of acting.

I last saw him a short while before the coronavirus pandemic struck. It had been a while.

“Call me, let’s talk. There is something we need to discuss,” Papa told me, handing me his business card.

But I procrastinated, partly because I was busy and also because I felt there would be ample time to meet and talk.

Later, on Saturday 20 July, I heard he had died. His business card flashed into my mind.

Papa’s widow Beatrice Andega told mourners he died after breathing complications while waiting for treatment at a top private hospital in Nairobi.

Tomorrow is not promised.

Papa’s success has inspired me to consider a return to the set at some point, be it as a screenwriter or director, maybe even an actor.

The industry still has many challenges and success is not guaranteed.

But we can look to the example of Papa, and see an important lesson.

That whatever you do in life, give it all of your heart – plus your belly – and success is yours to take.