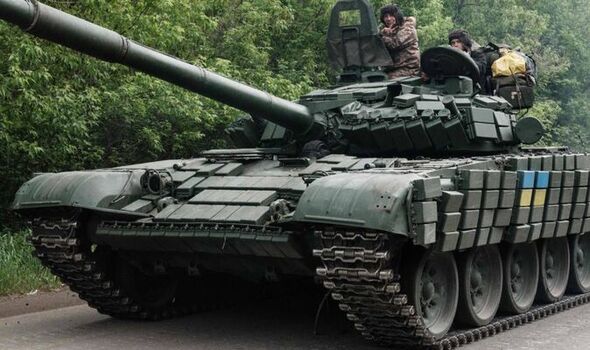 The UK’s Ministry of Defence briefing also revealed that Moscow’s offensive in the Donbas region “has lost momentum and fallen significantly behind schedule”. And Oleh Sinegubov, Kharkiv’s regional governor, stated that Ukrainian forces have launched a “counter offensive” as they seek to push back Vladimir Putin’s troops.

The MoD yesterday posted: “Despite small-scale initial advances, Russia has failed to achieve substantial territorial gains over the past month whilst sustaining consistently high levels of attrition.

“Russia has now likely suffered losses of one-third of the ground combat force it committed in February.”

The ministry added that the invading force was unlikely to accelerate its rate of advance dramatically over the next 30 days.

Estimates for the number of Russian troops in Ukraine vary, but the US-based Centre for Strategic and International Studies in March put the figure at 140,000.

If that was accurate, it would mean the number of soldiers killed, wounded or missing in action, based on the MoD’s calculations, is more than 45,000. Ukraine’s President Volodymyr Zelensky last week reckoned 27,000 had been killed.

Since February 24, when Putin ordered the full-scale invasion of his neighbours, Ukraine’s military has defended and fought back with such success that Russia’s commanders were forced to abandon an advance on the capital Kyiv, before being driven away from Kharkiv, Ukraine’s second-biggest city.

A counteroffensive is also underway near the Russian-held town of Izium. But Ukrainian reports said Russians were advancing elsewhere in the Donbas region, the main theatre of war over the past month.

Izium straddles the Donets river, about 75 miles from Kharkiv on the main highway heading south-east.

Mr Sinegubov said: “The hottest spot remains the Izium direction. Our forces have switched to a counteroffensive there. The enemy is retreating on some fronts.”

In the west of the country, near the Polish border, missiles destroyed military infrastructure overnight on Saturday and were fired at the Lviv region from the Black Sea.

Mr Zelensky said talks were underway seeking a way to evacuate wounded soldiers from Mariupol in the south in return for the release of Russian prisoners of war.

A large convoy of cars and vans carrying refugees from that city arrived in Ukrainian-controlled Zaporizhzhia on Saturday night.

But there was no let-up yesterday in Russia’s bombardment of the Azovstal steelworks, where a few hundred Ukrainian fighters are valiantly holding out.

Disturbing footage appeared to indicate bombs raining down on that last stronghold.

Petr Andryushchenko, an adviser to the mayor of Mariupol, claimed the video shows Putin’s forces dropping 9M22S incendiary and phosphorus bombs, which burn at temperatures in excess of 2,000C.

Yet Nato deputy secretary-general Mircea Geoana claimed the Ukrainians were now in a position to defeat the Russians.

He said: “The brutal invasion of Russia is losing momentum. With significant support from allies and partners – billions of dollars – we know that with the bravery of the Ukrainian people and army and with our help, Ukraine can win this war.”

Mr Zelensky’s troops have deployed many of their new US M777 howitzers at the front lines. Washington has delivered all but one of the 90 artillery pieces it was due to send.

The M777 is seen as particularly significant because of its long range and accuracy. The US embassy reposted a video of Kyiv’s soldiers training to use the weapons.