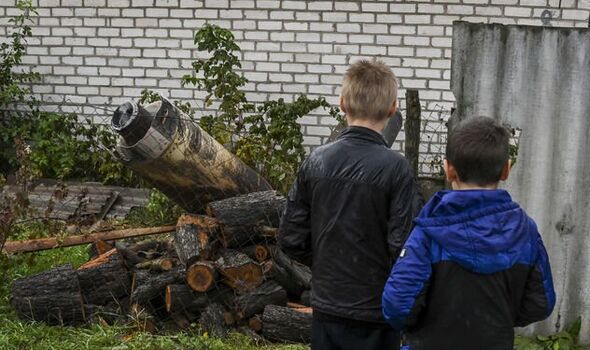 The Russians have been forced to retreat in the Kherson region, and in Donetsk in the east.

Footage showed Ukrainian soldiers liberating the village of Novopetrivka and ripping a Russian flag from a pylon.

They then wiped their feet on it before setting it alight.

On the eastern front, Denis Pushilin, the Moscow-backed leader in Donetsk, said Russian forces were preparing to defend the city of Kreminna in neighbouring Luhansk after being forced to retreat.

The Ukrainian successes have again raised fears of a nuclear strike by Moscow.

There was a report yesterday that the Kremlin had authorised the movement of a train thought to be linked to a military unit responsible for nuclear munitions.

There is speculation that President Vladimir Putin may order the “test” of a nuclear weapon near the Ukrainian border.

Nato says Putin has deployed a nuclear submarine equipped with an underwater drone that could allegedly cause a 1,640ft radioactive tsunami.

A Kremlin spokesman said Russia did not take part in “nuclear rhetoric” spread by the West.

In the early hours of yesterday, conventional Russian missiles crashed into the outskirts of the eastern Ukraine-controlled city of Kramatorsk.

One failed to detonate and a woman was pulled from the rubble of her home.