The outcome of Saturday’s state election will not directly alter the balance of power at a national level, where Muhyiddin’s coalition commands a razor-thin majority, but serves as a key test of the prime minister’s popularity.

A defeat for Muhyiddin’s allies could erode support among his coalition partners and increase pressure for snap national polls, according to Al Jazeera’s Florence Looi.

“There’s a lot at stake in these elections,” Looi said, reporting from Sabah.

“This is the first test for Prime Minister Muhyiddin Yassin since he took power in a political coup. There are calls even within his coalition for snap elections to secure a stronger mandate. Now, a general election is not due until 2023 but the results of this vote could have an impact on when the next parliamentary election will be called.”

Adding to the stakes, Looi noted, opposition leader Anwar Ibrahim declared on Wednesday that he has secured majority support in the national parliament to remove Muhyiddin and form a new government.

“Anwar’s challenge has underlined just how fragile the support for the prime minister is, even within his own coalition,” said Looi.

Malaysia has been gripped by turmoil since February, when a reformist government headed by Mahathir Mohamad, and including Anwar, collapsed amid bitter infighting.

Muhyiddin defected from the reformist government and seized power to form a new Malay-centric administration. His alliance has since taken control of many states with many legislators defecting to his camp.

The opposition now controls only Sabah and two of the country’s richest states, Selangor and Penang.

Saturday’s election in Sabah was called after a Muhyiddin ally launched a bid to take over the opposition-controlled local government. But rather than cede power, the chief minister dissolved the state assembly.

Loose coalitions are backing the government and the opposition, but analysts say the vote is too close to call.

Results are expected late on Saturday.

“A win will strengthen Muhyiddin’s position but a loss will embolden Anwar’s attempt to reclaim power,” Oh Ei Sun, a senior fellow at the Singapore Institute of International Affairs, told The Associated Press news agency. 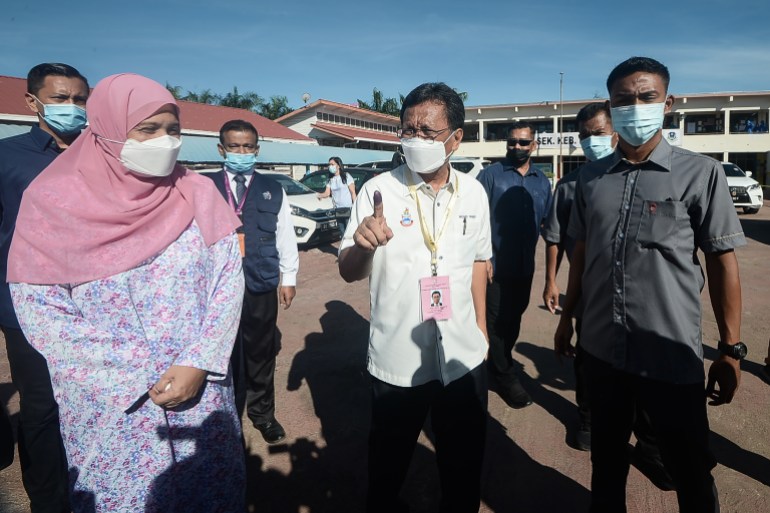 Shafie Apdal (C), president of the Sabah Heritage Party, cast his ballot at a polling station in Semporna [AFP]Anwar, who claims to have won majority support, including from legislators in Muhyiddin’s camp, has not revealed details as he is waiting to meet Malaysia’s king, who is in hospital for treatment. The king has the power to appoint a new prime minister or dissolve parliament for early general elections.

Muhyiddin has said Anwar’s declaration is a mere allegation until he provides evidence.

The prime minister has campaigned heavily in Sabah, pledging development, and billboards of his smiling face, dubbed “Abah” or father, are prominent in many constituencies.

Sabah and neighbouring Sarawak on Borneo island are seen as crucial for political leverage as they hold about a quarter of parliamentary seats. The two states are rich in oil and timber but among the poorest in Malaysia. They have a greater level of autonomy in administration, immigration and judiciary.

The Sabah election is heavily contested with 447 candidates vying for 73 state seats. More than a million voters, many in rural areas, are eligible to cast their ballots.

With coronavirus cases rising in the state in recent weeks, election officials have tightened rules with health screening and other strict precautions.