Pollution in Asia’s fourth-largest economy was made worse by factors like coal power generation and vehicle emissions. 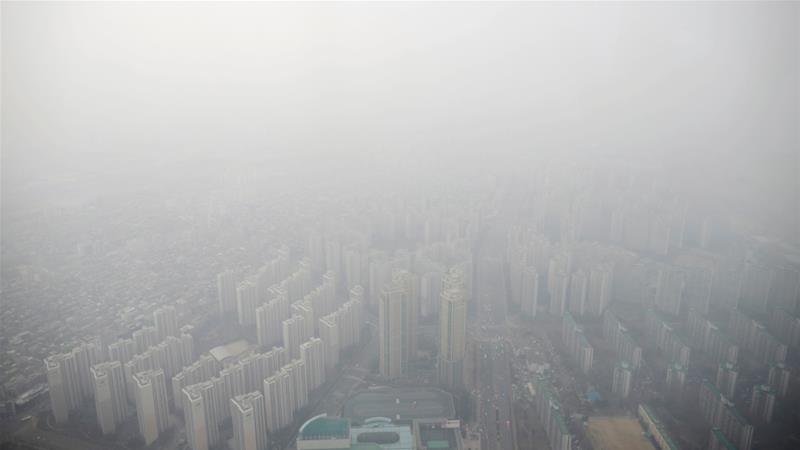 South Korea on Wednesday ramped up its firepower in its battle against pollution, passing a set of bills that designate the problem a “social disaster” and which could unlock emergency funds to tackle the issue.

Pollution in Asia’s fourth-largest economy has been exacerbated by factors including coal-fired power generation and high vehicle emissions, sparking widespread concern among the public and weighing on President Moon Jae-in’s approval ratings.

Designating the issue a disaster allows the government to use parts of its reserve funds to help respond to any damage or emergency caused by polluted air. The country’s reserve funds stand at up to 3 trillion won ($2.65bn) this year.

Other bills that were passed included mandating that every school classroom should have an air purifier and removing a limit on sales of liquefied petroleum gas (LPG) vehicles, which typically produce less emissions than gasoline and diesel.

South Korea’s air quality was the worst among its peers in the Organisation for Economic Co-operation and Development (OECD) as of 2017, according to data from the group. Its average annual exposure to fine particulate matter (PM) of less than 2.5 micrometres was 25.1 micrograms per cubic metre, slightly more than double the OECD average of 12.5.

The World Health Organization recommends that air quality standard should be no more than 10 micrograms in terms of PM 2.5 levels.

According to a weekly poll by Gallup Korea released on March 8, President Moon’s approval rating was down by 3 percentage points from a week earlier at 46 percent.

Unless any objections are raised, it should take around 15 days for the bills to become law.

The nation’s regional neighbour China has also been fighting pollution as it tries to reverse damage from over three decades of untrammelled economic growth.