More than 30 people were arrested and 12 injured in the capital Madrid overnight when trouble flared during angry demostrations sparked by Mr Sanchez’s decision to declare a six-month state of emergency across the country.

Violent and irrational behavior by minority groups is intolerable

Protesters blocked the city’s Gran Vía with makeshift barricades, lit fires in rubbish bins and clashed with riot police who opened fire on the furious crowds with baton rounds.

There were similar violent scenes in Barcelona where protesters attacked police with rocks and other projectiles as Spain’s second-largest city was rocked by a second night of civil disobedience.

In the northern Spanish city of Logrono, about 150 people attacked police with stones, set fire to containers and looted shops. 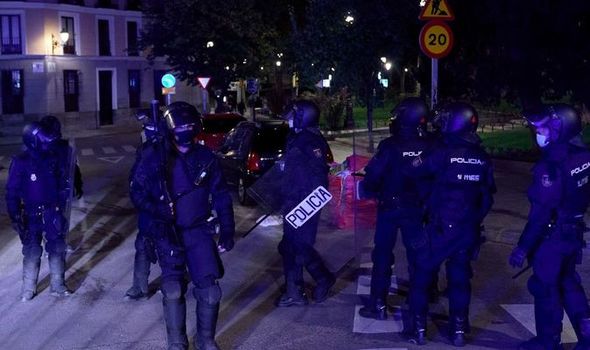 Six people were arrested in the town and video footage showed shop windows being smashed and large crowds of people running from riot police.

Riot police were also drafted in to quell disturbances in nearby Haro, in the wine-growing region of La Rioja.

Mr Sanchez condemned the protests and blamed the disturbances on a “violent and irrational” minority. 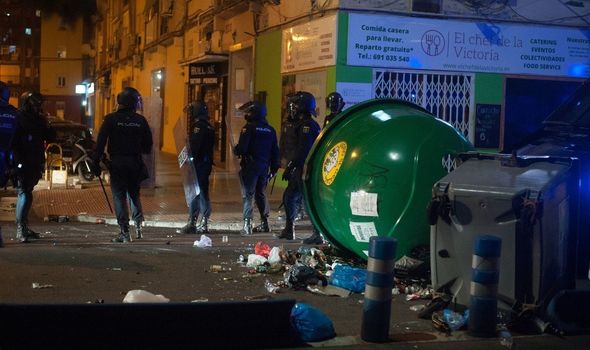 He said: “Only from responsibility, unity and sacrifice will we be able to defeat the pandemic that is devastating all countries.

“Violent and irrational behavior by minority groups is intolerable. It is not the way.”

Spain is among the countries hardest-hit by the coronavirus pandemic and has desperately tried to contain a second wave of infections.

But Mr Sanchez was forced to impose a fresh state of emergency until early May, giving regions legal backing to decide curfews and restrict travel to try halt the rise of COVID-19 infections.

Like other European countries, Spain has resorted to increasingly drastic measures to curb infections, although less stringent than those adopted by Germany or France.

Health Minister Salvador Illa told parliament: “We are aware that citizens are tired after months of effort and sacrifices, of not being able to do what they used to do before, to hug people, our family and friends.

“But it is not the time to relax measures, we have, very tough weeks and months ahead of us.”

Madrid resident Angela Suarez said: “It seems too much to me, people can’t stand it. 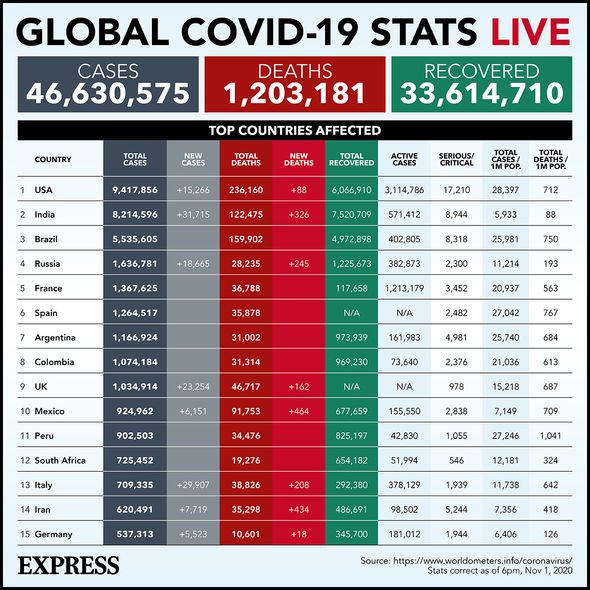 The country logged a record number of new coronavirus cases on Friday with 25,595 confirmed infections, the highest daily increase since the start of the pandemic.

The death toll went up by 239, bringing the total number of fatalities to 35,878 in Spain.

The official cumulative number of infections now stands at 1,185,678, but Mr Sanchez said the real total is likely to be more than 3 million based on prevalence studies and estimates.