Storm Bella is poised to sweep across the UK in just a few hours, bringing strong winds and heavy rain, which is set to last over the weekend. The stormy conditions are set to develop across parts of Northern England before moving south-eastwards into Sunday morning. In response, the Met Office has issued four yellow weather alerts and one amber alert.

Winds are expected to reach speeds of 130kmh (80mph) tomorrow, as the strong gusts move in from the Atlantic.

Weather charts show the strong gusts moving in from the west, as indicated by the red and purple swirls of colour.

A second chart, valid for 9pm on Boxing Day, shows where the storm is expected to hit, with London and the West Midlands being particularly affected by the unsettled conditions.

The Met Office has issued an amber wind warning, which warns travel could be disrupted, covering parts of the south, southeast England and south Wales.

The alert has been issued from 10pm December 26 through to 9am Sunday 27. 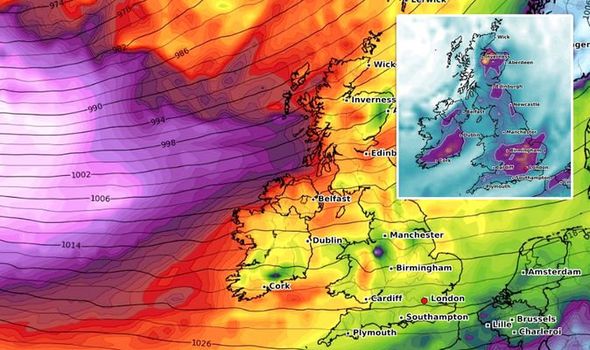 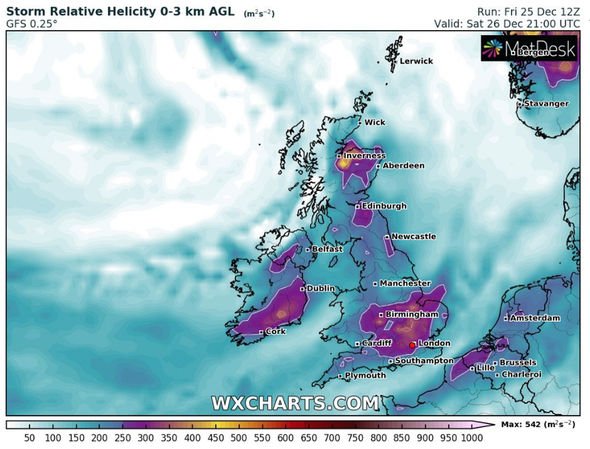 The severe weather warning has been issued as gusts of up to 60-70mph are forecast in exposed coastal locations.

The Met Office said the strong winds could cause damage to buildings, with warns flying debris “could lead to injuries or danger to life”.

They add: “Injuries and danger to life is likely from large waves and beach material being thrown onto coastal roads, sea fronts and properties.” 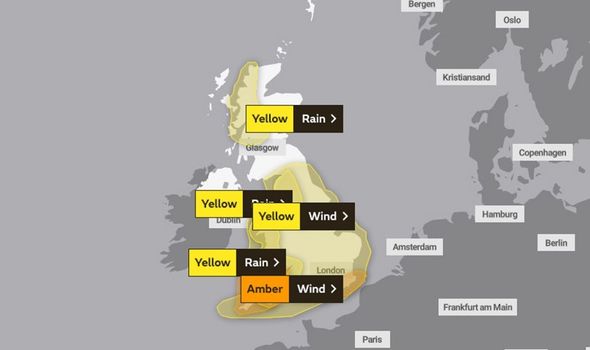 Several yellow weather warnings have also been issued, with a wind warning for the whole of England and Wales and parts of the south of Scotland from 3pm December 26 to 12pm Sunday 27.

The Met Office said: “Inland gusts of 50-60 mph are likely, with the potential for 60-70 mph in some locations. Hills and coasts exposed to the south-westerly winds could see gusts of 70-80 mph.”

Three yellow weather warnings for rain have also been issued.

The first covers the west of Scotland from 9am-midnight on Boxing day, the remaining two warnings cover Wales and the north west of England from 6pm December 26 to 9am Sunday 27. 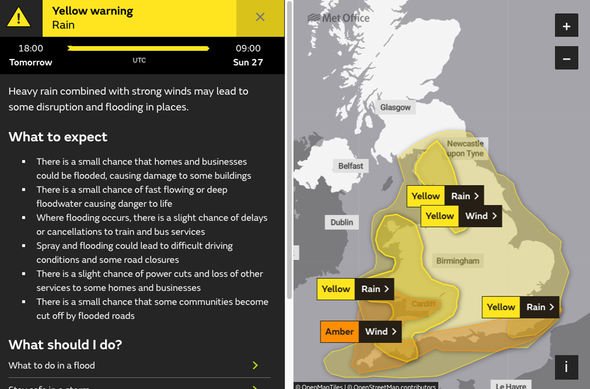 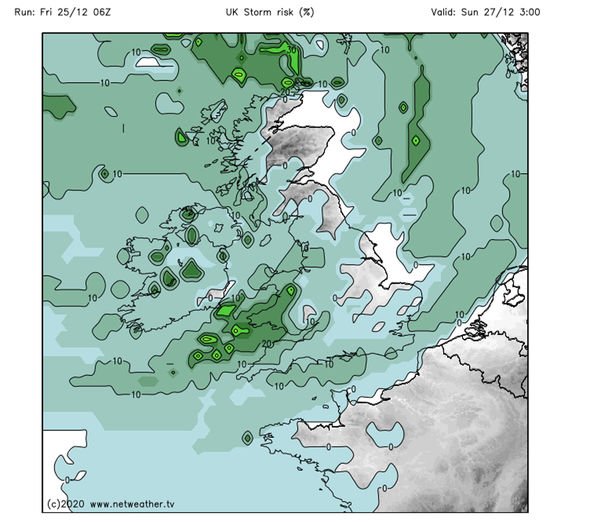 The forecasters warn “heavy rain combined with strong winds may lead to some disruption and flooding in places”.

Stormy conditions look set to continue into Sunday December 27, as highlighted by a weather chart from Netweather which shows huge swathes of the country hit by the tumultous conditions.

“Very strong winds will impact much of England and Wales, with particularly strong gusts on south west facing coasts.

“Heavy rain will also move in from the north, with heavy downpours through the afternoon in Scotland and Northern Ireland moving south across England and Wales overnight. 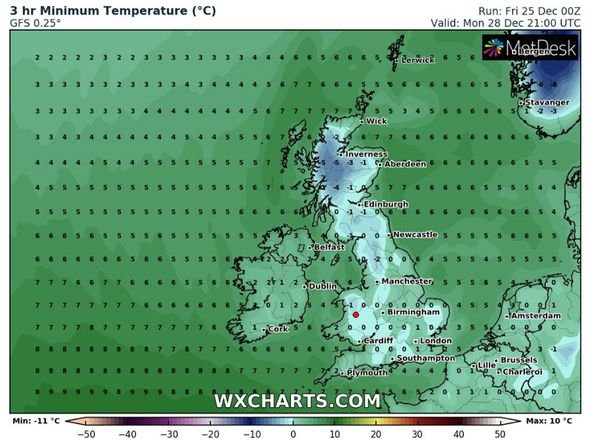 “This will be a notable change from the calmer conditions over Christmas Eve and Christmas Day so take extra care and stay up to date with the latest forecast.”

Ahead of Storm Bella, residents living in parts of Bedfordshire have been urged to leave their homes due to a risk of flooding.

Bedfordshire Police “strongly urged” residents living near the River Great Ouse in north Bedfordshire to seek alternative accommodation due to fears of flooding on Friday night.

He asked residents able to leave their homes to do so in a “Covid-safe way” if possible, recommending they go to one single location and stay there until it is safe to return in the coming days.

Across England, a total of 85 flood warnings and 110 flood alerts, as well as the two severe flood warnings, remained in force at 4pm on Christmas Day as huge amounts of water flowed through river catchments.