Storm Filomena is forecast to bring a staggering 50cm (19.6 inches) of snow and temperatures have plummeted to -36C in recent days across Spain. The deadly winter storm has been dubbed a “one in 30-year” event” as BBC Weather meteorologist Helen Willets said of Spain: “They haven’t seen snowfall in that amount since the 1970s.”

Heavy snow left thousands of Spanish drivers trapped in their cars on Friday, with roads were blocked and Madrid airport closed.

The M-30 and M-40 motorways near Madrid were among more than 400 roads where snow hindered vehicles, traffic authorities said.

Citizens were asked to avoid non-essential travel because of the highly unusual blizzard. 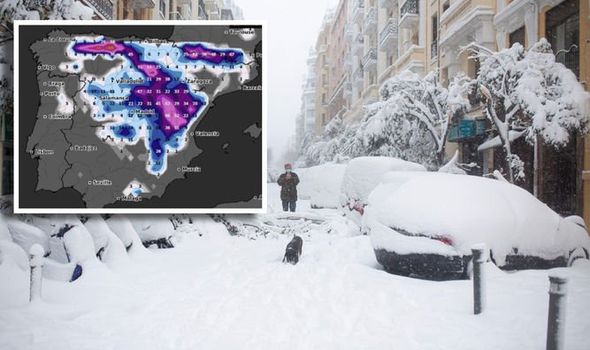 The Red Cross has been taking food to trapped lorry drivers on the A4 in Madrid.

A red warning for snow has been issued across much of Spain, with Italy and Croatia also on alert from the storm.

On Saturday forecasters have said Filomena will be over the Mediterranean and will trigger increased precipitation to the area due to the combination of cold air and humid winds.

There will be an 80 percent chance of snow across most non-coastal locations. 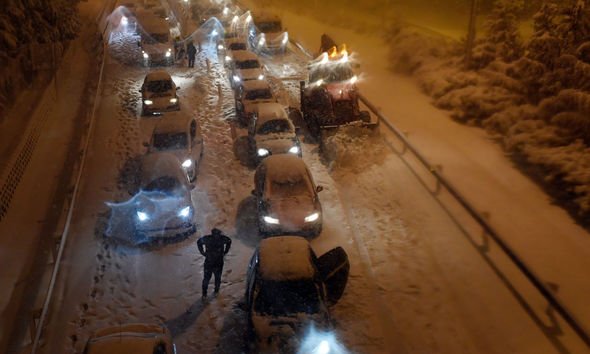 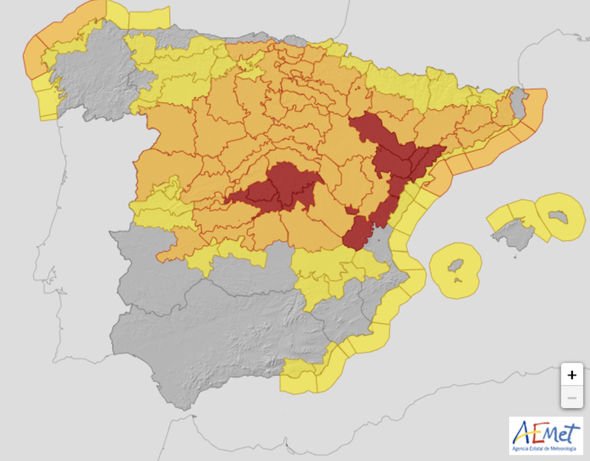 These warnings are classed as ‘important risk’ and caution up to 30 centimetres of snow could fall in 24 hours.

DON’T MISS
Winter Fuel Payment: Britons may get up to £300 – some will miss out [INSIGHT]
Met Office warning updated as yellow alert extended [FORECAST]
Millions must ‘adjust driving style’ due to frosty and icy roads [ANALYSIS]

Madrid Mayor José Luis Martínez Almeida said the city is prepared for the 20 centimeters of snow which have been forecast, but admitted it will create “great difficulties.”

Municipal workers have spread more than 350,000 kilograms of salt and 75,000 litres of salt brine on roads to prevent them from icing over.

Pictures show snow-laden roads blocked with cars and some residents even resorted to travelling using skis.

Firefighters helped to free those trapped in cars on Friday as temperatures plummeted to -12C. 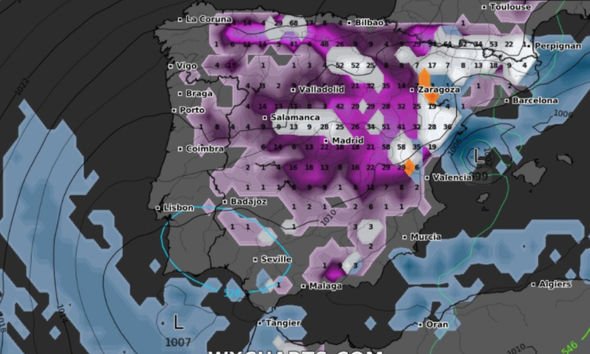 Snow has already blanketed parts of northern Italy this week, but yet more could be on the way from Storm Filomena.

Ms Willets said: ”It is going to spread to Italy and Balkans, with very significant snow to come for the Balkans.

“Madrid will face 20cm of more snow today. It is almost unheard of weather.”

Troops from the Unit for Military Emergencies have helped to clear roads and infrastructure across the country, the defence ministry said.

Castilla-La Mancha, one of the three regions put on high alert along with Madrid and eastern Valencia, closed schools.

Storm Filomena was named by Spanish Weather Service, AEMet and is made up of two areas of low pressure which are following each other across southwestern Europe.

AccuWeather Senior Meteorologist Tyler Roys explained this storm is so unusual as it is a combination of different weather features not seen since Storm Emma and the Beast from the East in 2018.

Mr Roys said: “A southerly storm track due to high pressure in the east-central Atlantic, the stalled [storm system] over central Europe and cold air that has funnelled in from Scandinavia and northern Russia are the features creating this uncommon setup.”

“With little to no break in precipitation, the second area of low pressure will rush over the Iberian Peninsula from Friday through Saturday night, causing precipitation to continue across southern and central areas, as well as expand into the Ebro River Valley and finally into the Northern Meseta by Friday night.”