The colossal Icelandic low-pressure system will strengthen rapidly through ‘explosive cyclogenesis’ as it reaches the UK. Jorge threatens to open the floodgates to a plume of freezing air from the north plunging the nation into weeks of cold weather. As the nation reels from storms over the past weeks, government forecasters have issued another raft of warnings for strong winds and heavy rain this weekend.

Moist Atlantic air swept in by the storm will bump cold air over Britain bringing snow to parts, experts warn.

Jorge, named by the Spanish meteorological service, will undergo an explosive cyclogenesis central-pressure drop of more than 24 millibars in 24 hours fitting criteria to be termed a ‘weather bomb’.

Exacta Weather forecaster James Madden said: “A major area of low pressure will cross the UK this weekend, while timings could deviate slightly, it looks as though the most impact from this storm will be on Saturday.

“This low pressure area will bring a large risk for disruptive and lying snow across parts of the country for several hours. 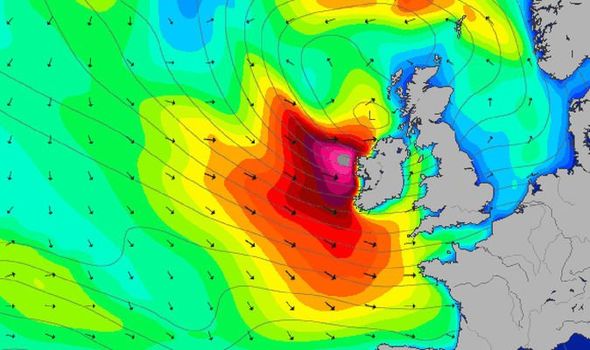 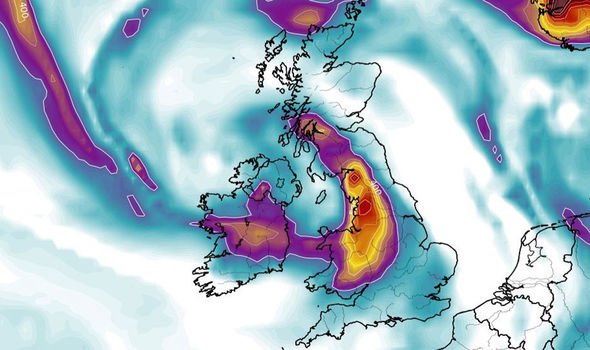 “The overall theme is likely to stay on the chilly side with further snow events to the north and south of the country over the coming weeks.

“The storm could signal the start of a severe bout of winter weather.”

Winds will start to pick up on Saturday afternoon after heavy rain with whipping gales bringing a bitter windchill, according to the Met Office.

Parts of the country could see up to five inches of rain fall by the end of Saturday – around two months’ worth.

Met Office meteorologist Craig Snell said: “By midday on Saturday we could have seen around 120mm of rain in parts with around 30 to 50mm widely.

“Jorge will see a central pressure drop of around 31 millibars in under 24 hours fitting criteria for ‘explosive cyclogenesis’.

“By Saturday afternoon the winds will have picked up and we are looking at gusts of up to 70mph along the coasts.

“It will be very cold in the south with windchill making it feel close to freezing, this will be noticeable after the very mild winter we have had so far.

“Air in the north will be cold enough to give some snow on Saturday, and as we go into a colder air mass there is a risk of showers in the south turning wintry over high ground. 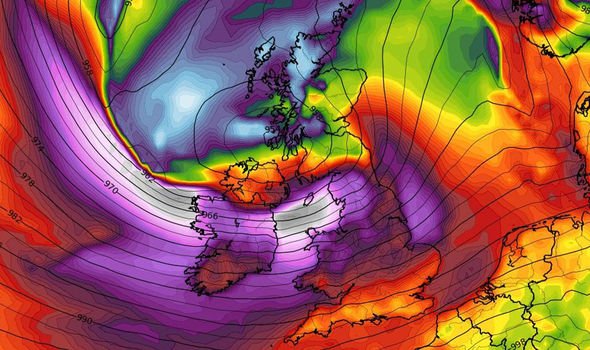 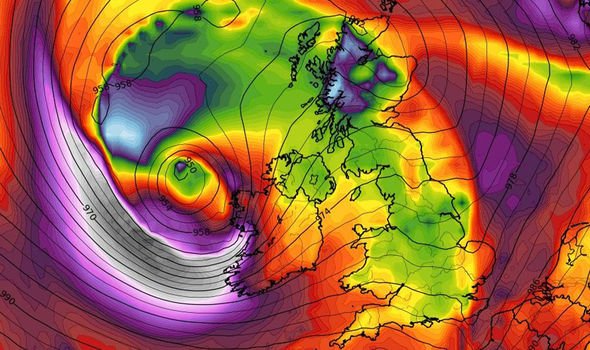 “Saturday is the last day of winter and it is certainly going to feel like it.”

Jim Dale, meteorologist for British Weather Services, said: “This storm is worthy of the warnings but probably not something to panic over.

“The cumulative rain situation over several days will be a concern as there is the potential for overspill coming after recent wet weather.

“The air pressure will fall very quickly and that is the reason for the very strong winds particularly over the north of Britain.”