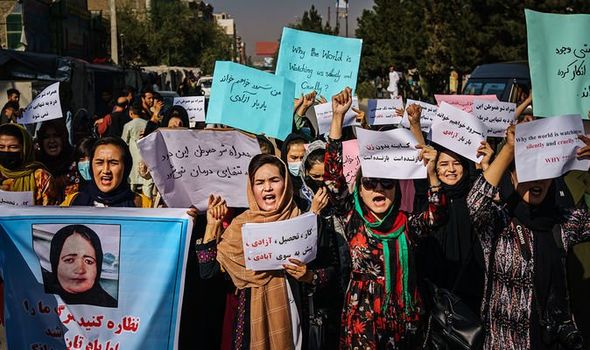 Yesterday, a day after the incident, the Taliban announced a ban on all unauthorised protests in the capital and other provinces. Afghanistan’s new rulers released a statement saying no one is allowed to go on to the street to demonstrate without permission from the justice and interior ministry.

Women are also to be banned from playing cricket and other sports because “it is not necessary” and un-Islamic.

Dozens of women had marched in the capital Kabul and the north-eastern Badakhshan province, saying they would not accept an all-male government.

The militant group running the nation denies using violence against demonstrators, but there are reports of attacks on protesters, executions of female police officers and Taliban opponents being raped.

Senior Taliban official Ahmadullah Wasiq stressed that sport was neither appropriate nor necessary for women.

He said: “I don’t think women will be allowed to play cricket…they might face a situation where their face and body will not be covered. Islam does not allow women to be seen like this.”

“It is the media era, and there will be photos and videos, and then people watch it. Islam and the Islamic Emirate [Afghanistan] do not allow women to play cricket or play the kind of sports where they get exposed.”