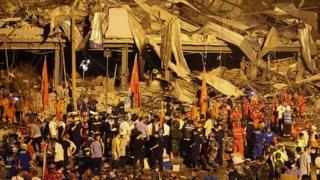 A tanker truck explosion in southeast China has killed 19 people and left over 170 injured, according to local media.

The vehicle was carrying liquefied natural gas (LNG) when it exploded on a highway in Zhejiang province on Saturday.

Images on social media show debris and plumes of smoke engulfing the area, and debris causing damage to buildings.

Authorities say they are investigating the cause of the accident.

The explosion took place near Liangshan Village, close to the city of Wenling. A second explosion also occurred after the damaged truck was propelled onto a factory building near to the highway.

Zhu Minglian, Wenling’s deputy mayor, said more than 2,600 rescue workers were deployed to the site, and efforts are still under way to recover any survivors.

According to local outlet Chongqing Daily, the company which owns the truck has been penalised 11 times by authorities in the past over health and safety failures.

Over the last two decades, China has build a vast and extensive national highway network, causing a rise in the number of vehicle traffic. But road safety continues to be a cause of concern in the country. More than 200,000 Chinese die every year in road accidents, according to the World Health Organisation (WHO).