Logan Marshall, 19, recorded the heart-stopping footage in the US state of North Carolina while shooting the surf from the beach. He said: “I’m a surf filmmaker and the waves were pretty good so we went out to film. The afternoon before there were a lot of sightings and stories so everyone was kind of cautious.

“Throughout the day I saw a lot of fins and tails that were definitely sharks, and then I saw one racing across so I zoomed my camera out and just hit record.”

In Logan’s video, the shark can be seen thrashing around right in front of the surfer, who appears to have their bottom half in the water.

The scene unfolded in Rodanthe, on North Carolina’s Outer Banks, about a mile from where another surfer was bitten on the foot in a presumed shark attack.

“A lot of people were saying it was an eight-to-ten foot hammerhead,” said Logan.

“There’s always danger if you’re surfing around sharks, which is all the time. 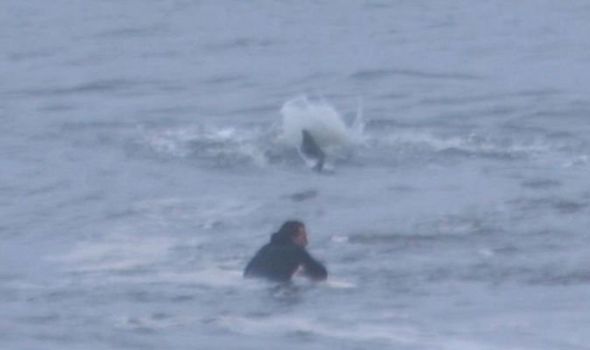 “There’s shark sightings a lot throughout the year but they’re always around – it’s the ocean.

“There was one year where there were a few attacks but it was taken extremely out of context.”

Mr Marshall is still unsure as to whether the surfer had spotted the shark.

And despite the drama, the videographer wasn’t worried.

“For some reason I wasn’t nervous at all, I was pretty excited I got the video,” he said.

“When I saw that the fin kind of veered off to the side I figured he was after some fish or something and didn’t care too much about the surfer. I started laughing and showed people.”

And he’s keen to emphasise that it’s not normal for a shark to strike.

“Just because there’s a shark doesn’t mean you’re going to get attacked,” he said.

“They’re always around and you shouldn’t be too scared of them, they’re really cool creatures.”