The lawsuit, filed in a DC federal court, is another challenge to the construction of Trump’s long-promised border wall. 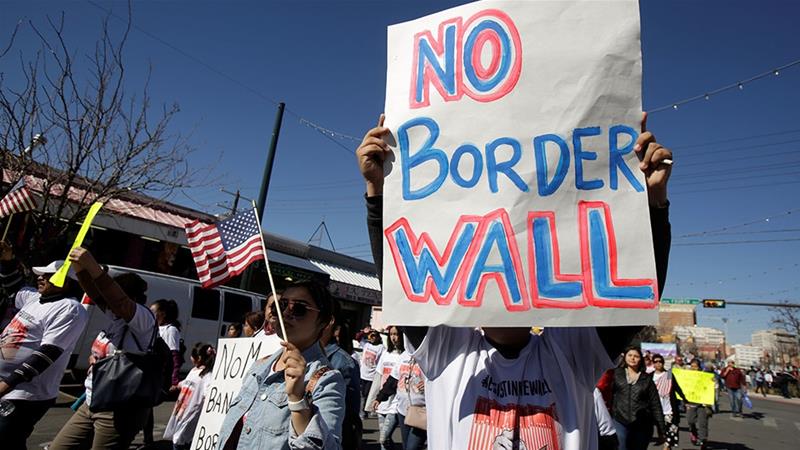 Three Texas landowners and an environmental group have filed the first lawsuit challenging President Donald Trump’s national emergency declaration aimed at freeing up billions of dollars to build a wall along the US border with Mexico, consumer advocacy group Public Citizen (PC) has said.

The lawsuit, brought in federal court in the District of Columbia on Friday, claims the south Texas landowners were told by the US government that it would seek to build a border wall on their properties if money for the project was available in 2019, according to a press release from PC.

“Words have meaning,” Allison Zieve, Public Citizen’s counsel for the plaintiffs, said in the release. “The facts make clear that the premise of the president’s declaration – that the absence of a wall in the areas where construction is planned is an ’emergency’ – is legally untenable and an impermissible basis for seeking to obligate funds that Congress has refused to appropriate for a border wall.”

Three of the plaintiffs on the lawsuit are private citizens in Texas’s Starr County, which was home to roughly 65,000 people in 2017.

The fourth plaintiff is the Frontera Audobon Society, a six-hectare nonprofit that acts as a “haven for birds, butterflies and other wildlife”.

All the plaintiffs claim the wall would deny them access to their land.

Trump declared a national emergency on Friday after Congress passed a spending deal to keep the government open that did not include funding for a border wall.

A national emergency, if not blocked by the courts or Congress, would allow Trump to dip into funds politicians had approved for other purposes to build a border wall.

Democrats and some rights groups have announced plans to challenge the emergency declaration.

They further requested legal documents related to the declaration, placing a deadline of next Friday on their delivery.

“We believe your declaration of an emergency shows a reckless disregard for the separation of powers and your own responsibilities under our constitutional system,” Nadler wrote in the letter.

The Americans Civil Liberties Union also announced on Friday they are suing Trump over the emergency declaration, calling it “blatantly illegal”.

There is no emergency. This is an unconstitutional power grab that hurts American communities. We’ll see him in court.

The coming legal fight seems likely to hinge on two main issues: whether the president can declare a national emergency to build a border wall in the face of Congress’s refusal to give him all the money he wanted; and whether federal law allows the Defense Department to take money from some congressionally approved military construction projects to pay for wall construction.

The Pentagon has so far not said which projects might be affected.

Trump claims the US-Mexico border is porous, facilitating the trafficking of narcotics and humans. Building a wall along the border was a key part of his platform during the 2016 presidential election.

Critics say most trafficking occurs in ports of entry and not the border.