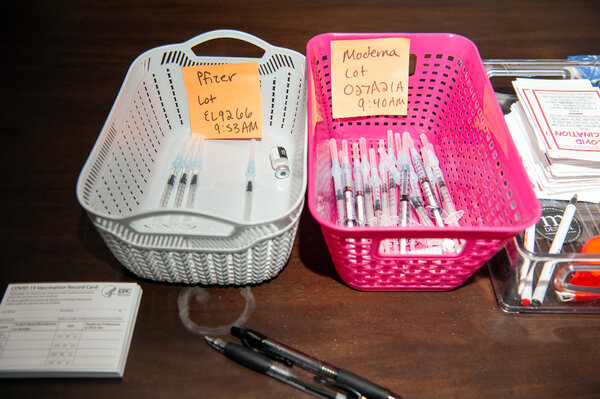 The coronavirus vaccines made by Moderna and Pfizer-BioNTech are proving highly effective at preventing symptomatic and asymptomatic infections under real-world conditions, federal health researchers reported on Monday.

There has been debate over whether vaccinated people can still get asymptomatic infections and transmit the virus to others. The study, by researchers at the Centers for Disease Control and Prevention, suggested that since infections were so rare, transmission is likely rare, too.

There also has been concern that variants may render the vaccines less effective. The study’s results do not confirm that fear. Troubling variants were circulating during the time of the study — from December 14, 2020 to March 13, 2021 — yet the vaccines still provided powerful protection.

The C.D.C. enrolled 3,950 people at high risk of being exposed to the virus because they were health care workers, first responders, or others on the front lines. None had previously been infected with the coronavirus.

Most — 62.8 percent — received both shots of the vaccine during the study period, and 12.1 percent had one shot. The participants had no previous infections with the coronavirus.

Participants collected their own nasal swabs each week, which were sent to a central location for P.C.R. testing, the most accurate type of test. The weekly swabs allowed the researchers to detect asymptomatic infections as well as symptomatic ones.

Fifty-eight percent of the infections were detected before people had symptoms. Just 10.2 percent of infected people never developed symptoms.

“This study shows that our national vaccination efforts are working,” said Dr. Rochelle P. Walensky, the C.D.C. director, in a news release.

The C.D.C. said this is the first of many vaccine effectiveness studies it will be conducting.