LONDON — In my last column, I described how the past year had made me a more flexible cook: more democratic, less judgmental. It got me thinking generally about the way certain vegetables are described, the adjectives they are often associated with. Why is an eggplant deemed “mighty,” for example, while leeks are often prefaced with the word “humble”?

I’ve never really held up such labels, but now more than ever, as we’re all making as much as we can from the groceries we have at home, I want to create space to move beyond these distinctions. My love for all-things-eggplant may indeed be “mighty,” but my enthusiasm for the “humble” leek is anything but modest.

The star of this month’s dish, leeks have an amazing ability to transform from one thing (when raw) to another (when cooked), something they share with their fellow alliums: onions, shallots and garlic. 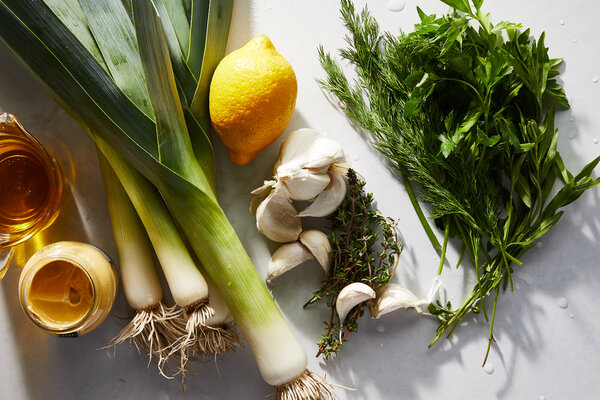 Think about garlic. When raw, a single, minced clove is harsh and metallic. A little goes a long way in a dressing. Compare this, then, to the 10 cloves of garlic in this confit leeks recipe. On the other side of a low-and-slow cooking process, these cloves are sweet and mellow enough to eat whole. The difference between these two outcomes makes me think that a more suitable adjective for any allium — if pressed to label — would be “magical.”

What feels like magic — like alchemy — is practically explained. Alliums store their energy in polysaccharides, which are chains of monosaccharides, or simple sugars. Once subjected to heat, these chains start to break down, and the longer and slower the cooking, the more caramelized, intense and flavorful these sugars will be.

Keeping the cloves whole also means that the sulfurous compounds in a garlic clove (or any allium) remain intact. An onion sitting whole on your kitchen counter doesn’t make you cry, remember: It’s only once a knife cuts through these compounds, activating and releasing them, that the tears will come.

The more chilled, quieter member of the allium family, leeks won’t ever make you cry. Rather, they may dazzle with their transformative abilities. Eating thick slices of raw leek is never going to be a winning idea, but those same slices are meltingly, magically tender and sweet when roasted slowly under a blanket of olive oil.

Alliums’ potential is often harnessed to great effect for the background notes of a dish. Consider chopped onion or crushed garlic, both of which begin the story of so many soups, stews and sauces. Or those very leeks, which can bring a quiet comfort to a cheesy pie or tart. In this recipe, on the other hand, alliums are front and center, with leeks standing upright, pert and proud, and calling unapologetic attention to themselves.

Here, too, they add “versatile” to their credentials, showing what can happen when they’re cooked, then blitzed with a little cream, mustard and lemon juice. Other adjectives — comforting, magical, nurturing — will naturally fall in line at this point.

There is enough going on here for the leeks to be served as they are, spooned over a (humble?) baked potato or alongside a (mighty?) roast chicken. But, as is, they’re humble and confident enough to pair with another so-called humble thing: the wholesome, hefty and toothsome lentil.