Tens of thousands of Czechs gathered in Prague on Wednesday to protest against the government’s handling of soaring energy prices and the country’s membership of NATO and the European Union.

The organising group “Czech Republic First!” opposes the European Union and NATO and calls for the central European nation of 10.7 million to be militarily neutral.

Protesters held banners like “End the comedy” and many waved Czech flags as the sun appeared after morning rain.

“This government is absolutely anti-Czech. It only serves Brussels (EU centre), American power and NATO. It has no regard for Czech citizens’ interests,” said Pavel Nebel, 53.

The organisers, whose programme also demands an end to “planned dilution of the nation”, opened the protest with the national anthem performed by a far-right singer, after which speakers took to the stage denouncing the government. 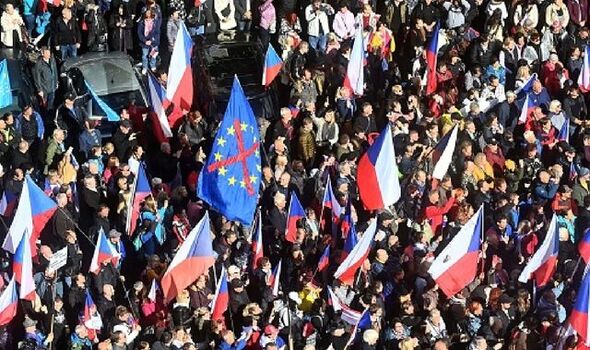 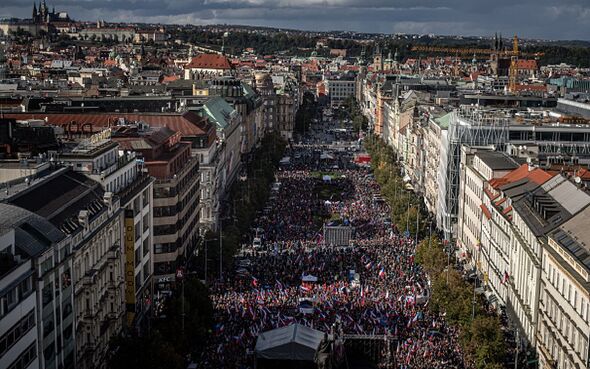 “A government has two duties: to ensure our security and economic prosperity. This government does not fulfil either of these duties,” one speaker said.

Hundreds of people gathered in other cities, where they could watch online streaming of the protest held in Prague, media reported.

High energy prices, fuelled by the war in Ukraine, have piled pressure on governments across Europe to cushion the blow of mounting energy costs for consumers and businesses.

The Czech government has signed up to EU sanctions against Russia and taken a tough stance over the Russian invasion of Ukraine.

Miroslav Sevcik, a dean at Prague University of Economics and Business and the first speaker at the Prague protest, called for scrapping of the sanctions.

The centre-right government of Prime Minister Petr Fiala this month adopted a string of measures, including financial aid for companies and price caps on electricity for households.

Opposition to the EU’s latest package of sanctions is also reaching unsustainable levels in Hungary where Viktor Orban said his government would not be able to support any more restrictions on the purchase of energy from Russia.

The proposed sanctions fall short of harder-hitting measures, including a ban on importing Russian diamonds, sought by Russia hawks Poland and the three Baltic countries.

But EU states need unanimity to impose sanctions and Orban has been a vocal critic, saying on Monday that the EU sanctions have “backfired”, driving up energy prices and dealing a blow to European economies.

“Hungary has done a lot already to maintain European unity but if there are energy sanctions in the package, then we cannot and will not support it,” Gergely Gulyas told a briefing.

“We are waiting for a final, full list of sanctions and then we can negotiate about it. Hungary cannot support energy sanctions.”

Hungary’s government is also in talks with the European Commission to secure billions of euros in EU funds blocked over rule-of-law concerns. Gulyas said he expected a deal would be signed as Budapest was ready to meet all its commitments made to the Commission.