The roar of engines has long been part of the soundscape of a city.

For a century, for billions of urban people worldwide, getting around has meant boarding a bus powered by diesel or an auto rickshaw that runs on gasoline, or among the affluent, a car.

Today, a quiet transformation is underway. Berlin, Bogotá and several other cities are taking creative steps to cut gas and diesel from their public transit systems. They are doing so despite striking differences in geography, politics and economics that complicate the transformation.

Berlin is reviving electric tram lines that were ripped out when the Berlin Wall went up. Bogotá is building cable cars that cut through the clouds to connect working-class communities perched on faraway hills. Bergen, a city by the fjords in western Norway, is moving its public ferries away from diesel and onto batteries — a remarkable shift in a petrostate that has for decades enriched itself from the sale of oil and gas and that now wants to be a leader in marine vessels for the electric age.

Bergen’s buses, too, are now electric, supplied by Chinese bus makers that have seized on the market in cities as far afield as Los Angeles and Santiago, Chile. The change is audible. “You can hear voices again in the streets,” said Jon Askeland, the mayor of the county that includes Bergen.

Urban transportation is central to the effort to slow climate change. Home to more than half the world’s population, cities account for more than two-thirds of global carbon dioxide emissions. And transportation is often the largest, and fastest growing, source, making it imperative to not only encourage more people to get out of their cars and into mass transit, but also to make transit itself less polluting and more efficient.

According to C40, a coalition of around 100 urban governments trying to address climate change, transportation accounts for a third of a city’s carbon dioxide emissions, on average, outstripping other sources like heating, industry and waste. 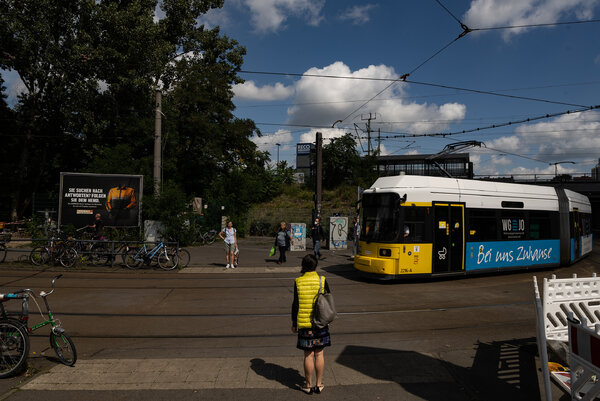 It hasn’t all been smooth sailing. In Costa Rica, for instance, private bus operators are divided on the national efforts to electrify mass transit. In Chinese cities, like Shenzhen, which has a fully electric bus fleet, the electricity itself still comes mostly from coal, the dirtiest fossil fuel. And everywhere it’s expensive to make the shift.

At the moment, only 16 percent of city buses worldwide are electric. The electric switch will need to accelerate, and cities will have to make mass transit more attractive, so fewer people rely on automobiles.

“It has become a reasonable position to advocate for less space for cars,” said Felix Creutzig, a transportation specialist at the Mercator Research Center in Berlin. “Ten years ago, it was not even allowed to be said. But now you can say it.”

The biggest challenge has been faced by cities that most need to make the shift: the most crowded and polluted metropolises of Asia and Africa, where people rely on informal mass transit such as diesel minivans or motorcycle taxis.

But where cities are succeeding, they’re finding that electrifying public transit can solve more than just climate problems. It can clean the air, reduce traffic jams and, ideally, make getting around town easier for ordinary people, which is why some politicians have staked their reputations on revamping transit. In many cases, city governments have been able to take climate action faster than their national governments.

“It requires political clout,” Claudia López, mayor of Bogotá, said in an interview. “For the last 25 years, Bogotá has been condemned to depend on diesel buses. That’s irrational in the 21st century.”

Bringing back the trams

When the Berlin Wall went up, half of Berlin’s electric tram lines came down.

By 1967, when Mr. Streese was three years old, West Berlin had ripped out nearly all the tracks of die Elektrische — The Electric, in German. Cars took over the roads.

Now, 30 years after the fall of the wall, as Germans confront the perils of climate change, there are growing demands to reclaim the roads from cars for walkers, bicyclists and users of public transit.

The mistake of the 1960s “is now being corrected,” said Mr. Streese, a Green party politician and Berlin’s permanent secretary for the environment and transport.

Berlin, along with several European cities, including Lisbon and Dublin, are reviving trams not only to clean the air but to curb emissions to meet the European Union’s legally binding climate goals. Those goals require a 55 percent reduction in greenhouse gas emissions by 2030, compared to 1990 levels.

Still, the politics of taking space away from cars is tricky. Berlin, with 1.2 million cars, has enacted a congestion tax, but it applies only to a tiny slice of the city. It’s all part of a broader effort to improve public transit, including by electrifying all buses by 2030, expanding metro and suburban trains, adding bike lanes and building almost 50 miles of tram lines by 2035.

The trams are not universally liked. Critics point out they are noisy, rattling along crowded streets day and night. They’re slower than subways, and in the era of car-shares and electric scooters, old-fashioned.

Tram fans point out that they are cheaper and faster to build than subways.

Like so much else in Berlin, the story of Berlin’s trams is a story of a partitioned city. As die Elektrische dwindled in the West, they kept running in the poorer, Communist-run East.

Today, one of the trickiest tram projects involves extending a line, called the M-10, across the historic Oberbaum bridge that linked the former East and West Berlin.

Inga Kayademir, 41, riding a packed M-10 late one Wednesday, welcomed an extension to the west. “Everything that reduces cars in the city is useful,” she said. “If it connects to the west, that’s a nice idea. It would add a second meaning to it.”

But building a new tram line on the bridge would mean taking lanes away from cars or bikes. Or, the city would have to build another bridge altogether.

Mr. Streese was not ready to say how the tram might be accommodated. But one way or another, he said, a tram would cross the Oberbaum no later than 2027. “It’s not going to happen very soon,” he said. “But it’s going to happen.”

Electric ferries in the fjords

Heidi Wolden spent 30 years working for Norway’s oil and gas industry. Today, she is working to put oil and gas out of business in her country’s waterways.

Ms. Wolden is the chief executive of Norled, a company that operates public ferriesincreasingly on batteries instead of diesel.

Ultimately, Ms. Wolden hopes to take her ferries well beyond the fjords. She wants to make Norled a leader in electrifying marine transport.

It is part of Norway’s ambitious effort to electrify all kinds of public transit. A plan all the more remarkable because Norway is a very small, very rich petrostate.

“Personally I am extremely happy that we are moving in the right direction,” Ms. Wolden said one brisk Friday morning, as the Hjellestad, a car ferry that Norled operates, set off from a quay near Bergen.

Norway has set ambitious targets to cut its greenhouse gas emissions by half by 2030, compared to 1990 levels. Almost all of Norway’s own electricity comes from hydropower. But what to do about its own oil and gas industry is at the center of a robust national political debate. Elections in September brought a center-left coalition to power, including small parties pushing for an end to oil and gas exploration in the North Sea.

Bergen is keen to fast-track its transition away from fossil fuels. Its city buses and trams run on electricity. Taxi operators have been told they must switch to all-electric vehicles by 2024, with subsidies for drivers to install chargers at home. Ferry operators have been offered longer, more profitable contracts to offset the cost of conversion.

Unlike in some other countries, including the United States, where climate policies are deeply polarizing, in Bergen there wasn’t much pushback. Mr. Askeland said politicians on the left and right agreed to trim the budget for other expenses to pay for the costlier electric-ferry contracts.

After all, the mayor said, voters in the area are conscious about addressing climate change. “That influences us politicians, of course,” he said.

Ferry operators aren’t the only private companies cashing in on the electric transformation.

Corvus Energy, which makes batteries for all sorts of marine vehicles, including, mind-bendingly, for oil tankers in Norway, is busy producing batteries for electric ferries. “The government, using purchasing power to change the world, is also very important for us,” said Geir Bjorkeli, the chief executive of Corvus. The company now has its eye on electrifying ferries in the United States.

Corvus batteries sat snugly under the deck of the Hjellestad.

On shore, cables dangled from two tall poles that a passer-by might have mistaken for lamp posts. The ship’s chief engineer, Arild Alvsaker, grabbed the cables with both hands and plugged them into the ship’s battery pack. The 10 minutes it took for cars to pull into the ferry was enough to load up with enough power for its roughly 45-minute voyage up the fjord and back.

Mr. Alvsaker was at first dubious about running a battery-powered ship. It took less than a week for him to change his mind. “I was dirty up to here before breakfast,” he said, pointing to his upper arm. “I don’t want to go back to diesel.”

He has since bought an electric car.

The water was calm that morning as the ship left the quay, almost soundlessly. On an electric ferry, there’s no roaring engine.

Gondolas with Wi-Fi in the sky

The TransMiCable is a loop of firehouse-red gondolas that glide up from the valley to the neighborhoods stacked along the hills that surround Bogotá.

There are plans to build seven lines as part of the city’s efforts to clean up its public transport. Nearly 500 Chinese-made electric buses are on the roads, and contracts are out to buy another 1,000 by 2022, making Bogotá’s electric bus fleet one of the largest of any city outside China. The mayor, Ms. López, a cyclist, wants to add roughly 175 miles of bike lanes.

But for Fredy Cuesta Valencia, a Bogotá schoolteacher, what really matters is that the TransMiCable has given him back his time.

He used to spend two hours, on two slow buses, crawling through the hills to reach the school where he teaches.Once, he said, traffic was so backed up none of the teachers could arrive on time. Students waited outside for hours

Now, it takes him 40 minutes to get to work, an hour at worst. There’s Wi-Fi. Clouds. Rooftops below.

For politicians like Ms. López, electrifying public transit helps her make the case that the city is aggressively cutting its emissions. But if she can also make transit better, not just make it electric, it can attract voters, particularly working people who make up most of the electorate.

But overhauling transportation is expensive. For Ms. López, who belongs to a center-left political party, it requires negotiating for money from the national president, Iván Duque, who belongs to a rival conservative party.

Yet their parties have managed to find some common ground. Mr. Duque is helping Ms. López build Bogotá’s first metro , something mayors have been trying for decades.

If Bogotá can’t change its transportation system, she said, Colombia can’t achieve its climate goals. “You’re interested in having a more competitive city. It’s in our common interest to achieve Colombia’s climate change goals,” she said.