Trump predicts a ‘very successful’ summit and Kim says he is ‘certain’ of an outcome as the leaders meet in Hanoi. 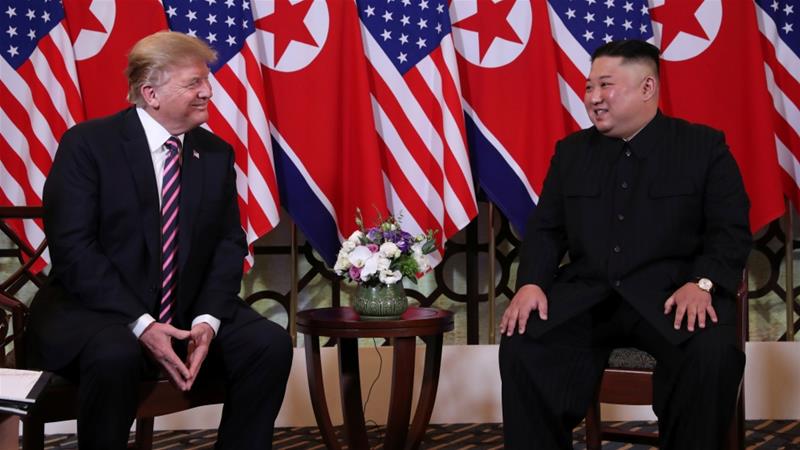 Hanoi, Vietnam – US President Donald Trump and North Korean leader Kim Jong Un have met for the second round of talks in Vietnam almost eight months after the landmark Singapore summit.

Kim and Trump, who reached the Vietnamese capital on Tuesday, shook hands at the Metropole hotel on Wednesday, sat down for a brief exchange before heading off to a working dinner.

“I believe the first time we met it was a great success and I think this will be equal or greater than the first one,” Trump told Kim at the brief meeting in front of reporters and photographers.

“In the first one, we made a lot of progress. And the biggest was our relationship. It was a really good one.”

Trump then told the North Korean leader his country “has tremendous economic potential, unbelievable, unlimited” before adding that he looked “forward to watching” North Korea achieve “a tremendous future”.

In Singapore, Kim and Trump outlined four commitments: establishing “new relations” for peace and prosperity; building a “lasting, a stable peace regime on the Korean Peninsula”; working “towards denuclearisation”; and recovering and repatriating the remains of soldiers killed during the Korean War.

However, the agreement did not explicitly define denuclearisation – leading to disagreements over what it means – nor did it detail a specific timeline for the destruction of North Korea’s nuclear arsenal.

“This time, I am convinced that an excellent outcome will be produced that all the people can welcome. And, I will do my best to make that happen,” said the North Korean leader.

“We were surrounded by mistrust, misunderstanding and outdated practices that have tried to block our path that we would want to be on. However, we were able to overcome all that, and we walked all the way to Hanoi in 261 days.”

At the dinner, Trump was accompanied by Secretary of State Mike Pompeo and acting Chief of Staff Mick Mulvaney. Kim was joined by his top envoy, Kim Yong Chol and Foreign Minister Ri Yong Ho.

The two leaders are due to meet again on Thursday on the second day of the summit for formal talks.

The agenda for Thursday’s talks is likely to have the US seeking an assurance from North Korea that it will stop testing its nuclear weapons and ballistic missiles. In addition, easing of sanctions on North Korea and a formal end to the Korean War, that ended in an armistice in 1953, is also likely to be discussed.

Asked if he would declare a formal end to the Korean War, which North Korea has long called for, Trump said: “We’ll see.”

The White House said the two leaders are scheduled to sign a joint declaration on Thursday.

The smiles on both leaders’ faces were a good sign for the summit, Lami Kim, a former South Korean diplomat, told Al Jazeera.

“Ultimately, in national negotiations, chemistry of the leaders do matter and I think they both looked confident and a lot more relaxed than they did in Singapore,” said Lami.

“I also saw a big smile on Kim’s face when Trump talked about how much of a potential North Korea has for economic development.”

“On the discussion table though, North Korea has a definite advantage because, on the US side, they have people without much expertise on either North Korea or nuclear issues,” Lami said.

“At the end of the summit, some dismantling of the nuclear sites in North Korea and easing of sanctions on Pyongyang would be a happy outcome for each leader respectively.”

Following the criticism in Singapore, there is now a concern that a repeat of vague results will not be taken well this time around.

“A second summit with no outcome will be highly criticised, especially in the US and especially when Trump is in a state of domestic turmoil,” Jenny Town, a research analyst at the Simpson Center, told Al Jazeera.

“That outcome won’t be popular in North Korea either as they have gone out of the way to build a narrative domestically about denuclearisation and turning towards economy and expecting certain benefits.”