Foreign minister says Turkey working with the US in identifying who will run the Syrian town once the YPG has withdrawn. 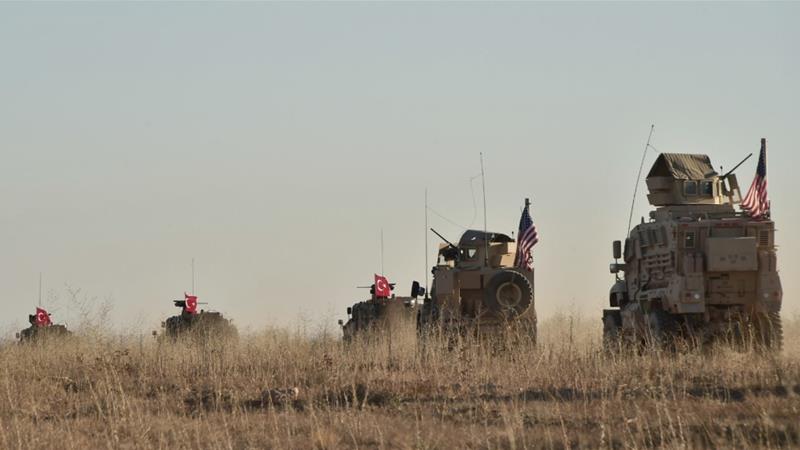 Turkey’s foreign minister has said the work to implement an agreement between Ankara and Washington over the town of Manbij in northern Syria has recently accelerated.

Speaking to reporters in the US capital on Wednesday, Mevlut Cavusoglu said the Washington-backed Kurdish People’s Protection Units (YPG) militia remained inside the town.

“The process in Manbij has sped up despite the weather conditions but the roadmap should have been completed by now and the reason it hasn’t been is the United States,” he said.

Cavusoglu said apart from joint patrols, Turkey has begun working with the US in identifying who would run Manbij and who could be within the security units of the town once the YPG had withdrawn from the area.

After months of disagreement, Ankara and Washington agreed in June on a plan that would see the YPG removed from the town. Turkey has repeatedly expressed its frustration that the implementation of the plan has been delayed.

“The US administration also wants the roadmap to be implemented as soon as possible,” Cavusoglu said.

Ankara considers the YPG and its political wing, the Kurdish Democratic Union Party (PYD), to be “terrorist groups” with ties to the banned Kurdistan Workers’ Party (PKK) in Turkey. The YPG, however, has long been Washington’s main ally in the war against the Islamic State of Iraq and the Levant (ISIL, also known as ISIS) group in Syria and played a key role in driving out its fighters from large swaths in the north of the war-torn country.

The US-backed Syrian Democratic Forces, which is spearheaded by the YPG, has controlled Manbij since 2016.

Cavusoglu was in Washington, DC to attend a gathering of 79 countries partnering with the US against ISIL. He said there was still little clarity on the details of Washington’s planned withdrawal from Syria and the creation of a “safe zone” in the northeastern part of the country.

“No concrete ideas on the safe zone has emerged yet. We are discussing this with Russians as well and trying to coordinate it with the Americans,” he said.

In a surprise move in December, US President Donald Trump confounded his own national security team and some of Washington’s allies by announcing the withdrawal of all 2,000 US troops from Syria, declaring that ISIL had been defeated there.

No clear timetable has been set, however, and US intelligence chiefs told a Senate hearing late last month that ISIL and al-Qaeda remained threats to Washington’s interests.

Trump’s announcement, which was followed by his proposal to create the “safe zone” came as Turkey made preparations for an offensive against the YPG militia in Manbij.

Turkish President Recep Tayyip Erdogan, who has backed the “safe zone” following a phone call with Trump in January, has said the 32km-deep area was to be created inside Syria along the length of the country’s border with Turkey.

But he has stressed that Turkey would not allow the YPG to shelter in the planned Syrian zone.

Washington, meanwhile, has demanded Ankara assure safety for its allied Kurdish fighters, with Trump threatening to “devastate Turkey economically” if it attacked the YPG when US troops withdrew.

Erdogan, who has welcomed the planned withdrawal of US forces, said on Tuesday that if “terrorists” are not removed from Manbij in a few weeks, Turkey’s willingness to wait would come to an end.

“There is no satisfactory plan that is put before us concretely yet,” Erdogan told a parliamentary meeting of his AK Party on Tuesday, referring to the creation of the “safe zone”.

“Of course, we are loyal to our agreements, our promise is a promise. But our patience is not limitless.”

Turkey wants to set up the “safe zone” with logistical support from allies and says it should be cleared of the YPG militia. Cavusoglu repeated the zone could not be an area that would give protection to the group.

“It is important what we understand from a safe zone. If what is understood or desired is a buffer zone that will protect the terrorists, we are against it,” he said.

Cavusoglu also said a “task force” group was set up between Ankara and Washington specifically to focus on the work linked to the US’s withdrawal from Syria.

“We have put in place this mechanism to ensure this process is carried out in coordination and without problems,” he said.