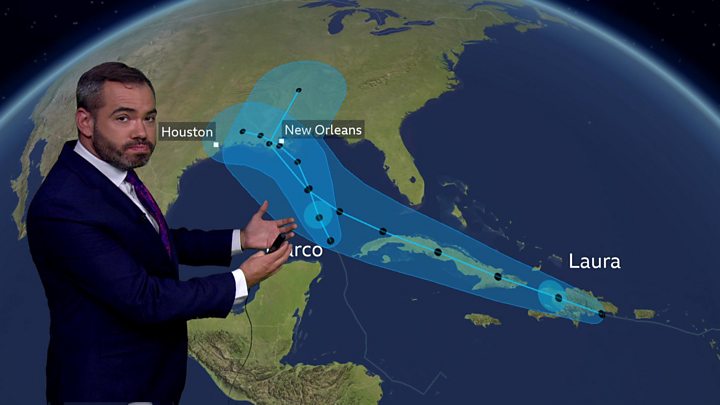 Thousands of people have been evacuated from parts of the Caribbean and southern US as two storms tore through the region on Sunday.

Heavy rains have also battered the US territory of Puerto Rico.

Marco is expected to make landfall in the US state of Louisiana on Monday, with Laura hitting Texas by Thursday.

But forecasters say that Laura may swing east towards Louisiana, and it could be the first time in recorded history that the state has been hit by two simultaneous hurricanes.

In response to the storms, US President Donald Trump has issued a disaster declaration for Louisiana, ordering federal assistance to coordinate relief efforts. On Saturday, a similar declaration was made for Puerto Rico.

A least three people have been killed in the Dominican Republic as Laura swept through the country, leaving more than a million people without electricity. Among those killed was a seven-year-old boy who died with his mother after a wall collapsed in their home. The third person died after a tree collapsed on a house.

Five other deaths have been reported in Haiti, including that of a 10-year-old girl. The capital Port-au-Prince, is also experiencing severe flooding.

Meanwhile in Cuba, many residents in the country’s eastern regions have been evacuated and housed in shelters or safer buildings on higher ground.

Marco strengthened to a hurricane on Sunday, with sustained winds of up to 75mph (120km/h), and is moving north between Cuba and Mexico’s Yucatan Peninsula.

Laura is also predicted to become a hurricane on Wednesday, with its course heading northwest towards Houston, America’s fourth-largest city.

The US National Hurricane Centre has warned that back-to-back hurricanes arriving in the US within days of one another could result in prolonged periods of hazardous weather.

The US Coast Guard has also issued a warning for the Port of New Orleans, and called on ships to make plans to evacuate some areas.