The maps obtained from NetWeather show thunderstorms hitting most of Scotland, the north, a small part of northern Wales and petering out near the Midlands. They will strike at around 9pm on Sunday, August 14 – the last day of this week’s heatwave which will see highs of 36C at its peak. And it won’t stop there – as NetWeather’s forecast shows a slightly weaker storm picture for the rest of the country by 3pm on Tuesday, August 16. In its predictions for Greater London, it gives an 82 percent storm risk on Monday, August 15, dropping to 35 percent on Tuesday and 12 percent on Wednesday.

Across this period, however, it gives a 60 percent chance of rain on August 16.

Nearly all forecasters, including the Met Office, have spoken of the risk of storms after the heatwave, an almost common occurrence after prolonged heat.

The forecast for this time period from the Met Office says: “Across much of England and parts of Wales, where some prolonged rainfall is much needed, rain from showers and thunderstorms can be hit and miss, so not everywhere sees beneficial rains, if such a pattern would transpire.

“What there isn’t any sign of though, is a widespread unsettled and cooler westerly pattern with Atlantic rains moving east across all parts, like we saw in early August last year. 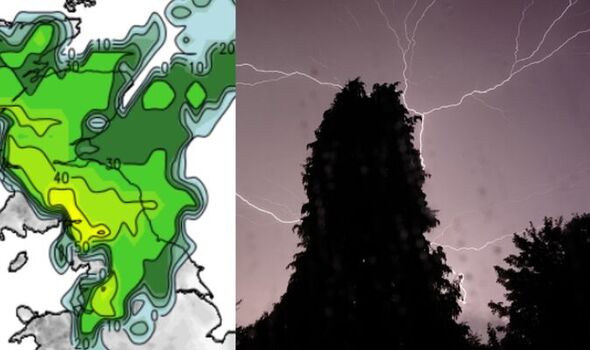 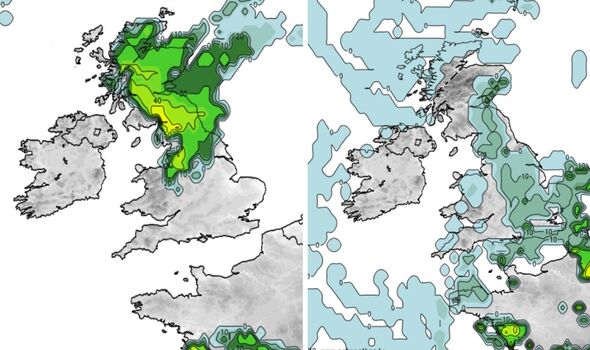 “So, it could be that the first half and perhaps even the first two-thirds of August sees very little rain for large parts of England and perhaps east Wales.”

NetWeather forecaster Nick Finnis said in his weather round-up: “The start of this period will see dry and sunny spells for most with temperatures very warm or hot.

“Meanwhile, far north and northwest regions may see cloud, patchy rain, and coastal mist and fog in places, with near normal temperatures.

“Heavier showers may develop in the southwest and spread through the week, with some possible thundery showers in the south.” 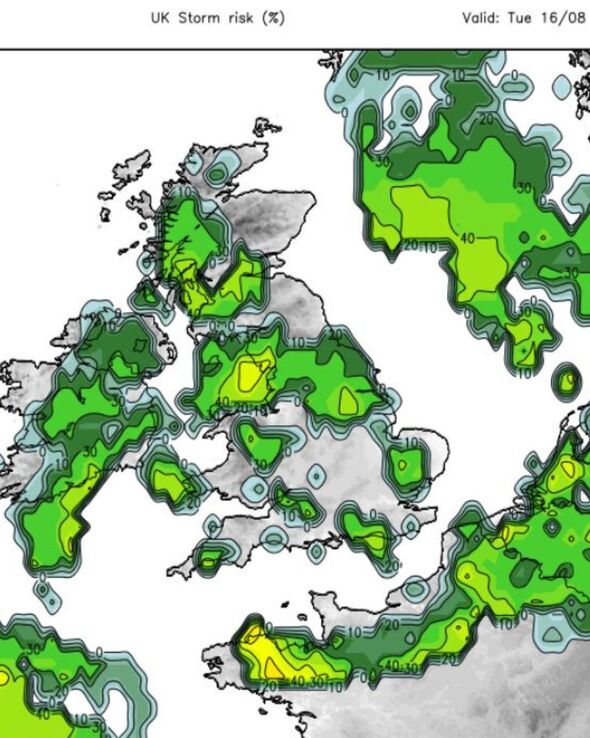 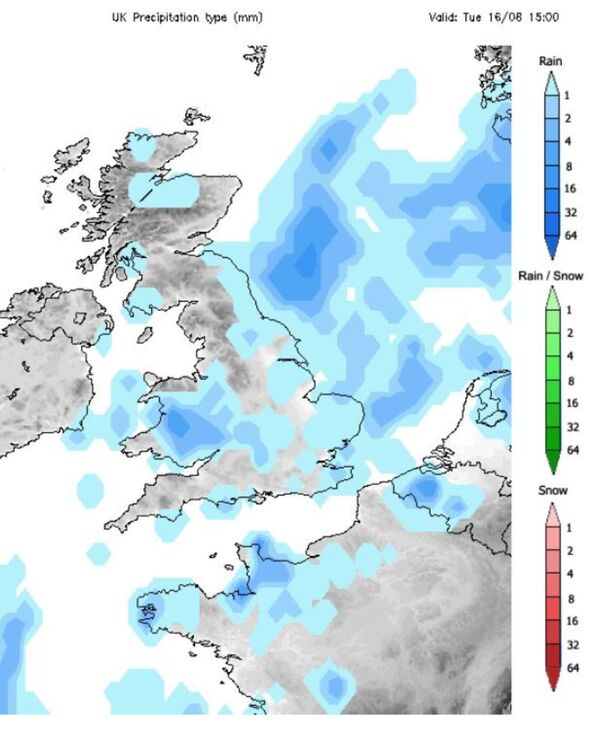 Jim Dale, a senior meteorologist at British Weather Services told Express.co.uk they will be “likely sporadic, possibly intense but too far away to be certain exactly where and when.”

But he did call it the “breakdown of the big heat”, insinuating the scorching temperatures would come to an abrupt end.

The Weather Outlook tweeted there would only be little rain, if any.

Founder Brian Gaze said: “(Charts) suggesting a good chance of a little rain in the London area next week. But little could be the keyword.”

Interactive weather maps, WX Charts shows the temperature will at least drop to around 24C in central parts of England, with Monday still being a very hot day.

This will be a more than 10C drop from this week, where thermometers are expected to hit 36C at Heathrow Airport.

The last time temperatures of this extreme were achieved was back in July in the lead up to the hottest ever day, July 19, where unbearable 40.3C heat was reached.