High pressure is expected to send hot air from France, Spain and Portugal in Europe towards the UK next month. Heat maps from Netweather show blistering hot shades of red sweeping Europe on Monday, July 12, with highs of 37C hitting France. The maps then show the hot air pushing upwards towards south-eastern England, as baking temperatures of 28C hit London on the same day.

Elsewhere, Kent and Essex could bask in 26C, while Leeds and Norwich further north are hit with 25C.

Newcastle and Northumbria may also scorch at 22C.

The heat is expected to linger further into July, as the maps show western regions of the UK baking in hot temperatures on Tuesday, July 13.

Bristol and Birmingham and Manchester could see highs of 22C, while Cumbria and the Lake District in the north west see 20C. 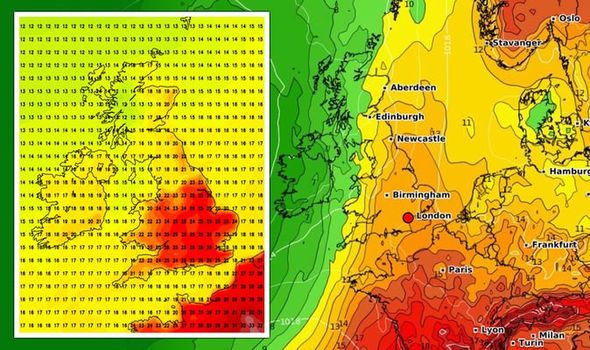 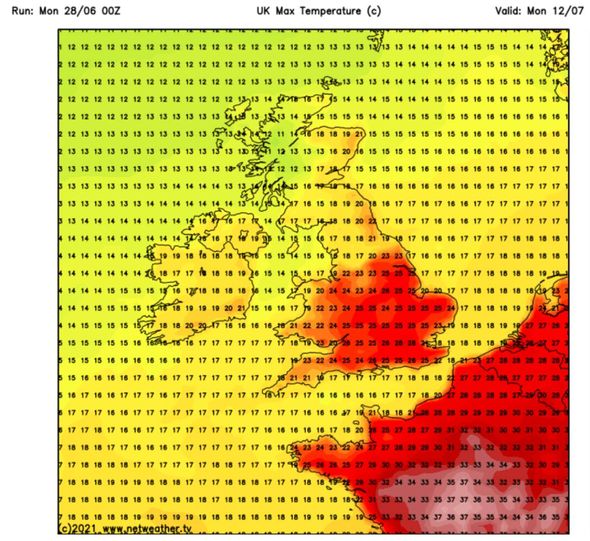 Netweather’s long-range forecast between Monday, July 12, and Tuesday, July 27, predicted hot air from Spain or Portugal heading over to the UK.

The forecast said: “The signal for high pressure reduces during this period, suggesting that the weather may turn more unsettled again from the west, especially towards the end of the period.

“There is potential for some notable heat during this week, as temperatures have been building over North Africa and Spain and Portugal.

“As the fine weather breaks down we may tap into some of this hot air, though confidence at this range is relatively low. 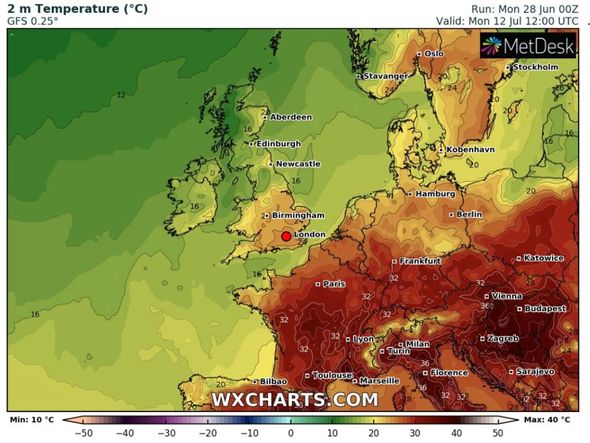 “There is thus quite high confidence in above-average temperatures during this week, most likely by around 2C.

“Confidence in sunshine and rainfall amounts is somewhat lower, but it is most likely to be drier than average in the north and east of Scotland, with above-average rainfall most likely to affect the south of England.”

The BBC’s long-range forecast suggested a heatwave could develop during July.

The forecast between Monday, July 12, and Sunday, July 25, said: “The issue is confused by two alternative outcomes looking possible. 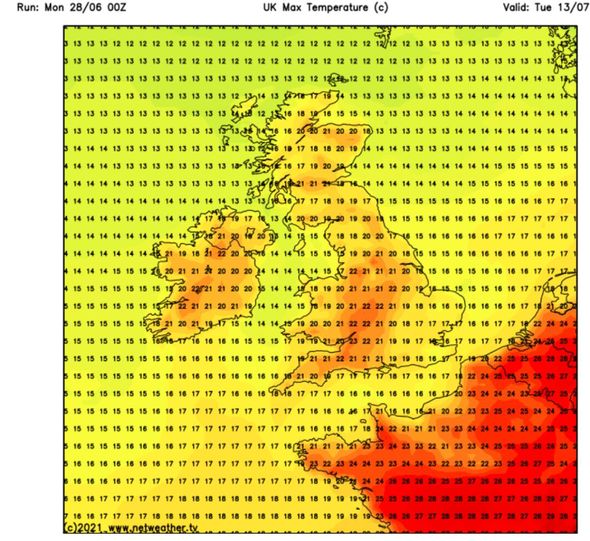 “Firstly, it is not out of the question that unsettled westerly flows could develop more widely and bring more frequent rain to more areas.

“However, the greater possibility is contrary to that: high pressure could build more strongly in the vicinity of the British Isles and produce drier and warmer conditions rather widely.

“There are certainly some computer model evolutions that suggest this is possible but there are in a minority at the moment, and it is about a 30 percent chance.

“Indeed, models have been keen on building quite strong high pressure over and around Scandinavia through the middle of July, which would be a very warm pattern with chances of heatwaves developing.” 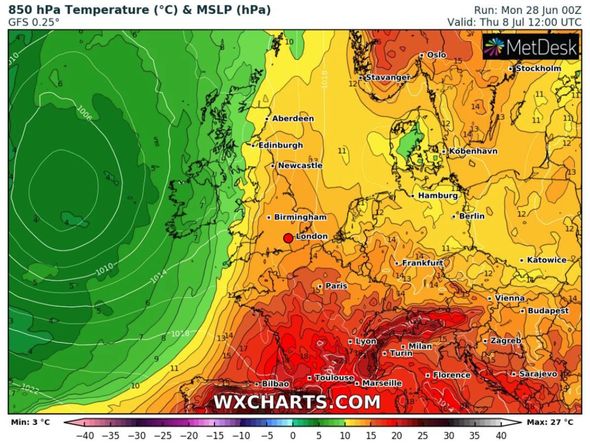 The Met Office added there may be occasional spells of rain, but “hot spells” are likely to be more prevalent next month.

The forecast between Sunday, July 11, and Monday, July 26, said: “Temperatures are likely to trend above normal, notably across some parts of the northeast.

“As is typical for the time of year, confidence is relatively low for this period, though the emphasis is for a lot of fine and dry weather for the rest of July.

“Temperatures are likely to be above average throughout, which increases the possibility of some very warm or hot spells occurring.”