Scorching temperatures will return on Friday, with the heat returning, and conditions feeling more like summer. Forecasters are predicting a hot day on Friday, with up to 29C likely for the south of England.

Grey, dreary skies and cooler weather have dominated July so far, so sun seekers will be glad to hear hot weather is making a return.

This heat will continue into the weekend, with hot days on the way for Saturday and Sunday.

Met Office meteorologist, Nicky Maxey said: “The sunshine is back over the next few days. It’s going to feel more like July.

“Friday looks like it’s going to be the hottest day, but temperatures will still be high across the weekend. 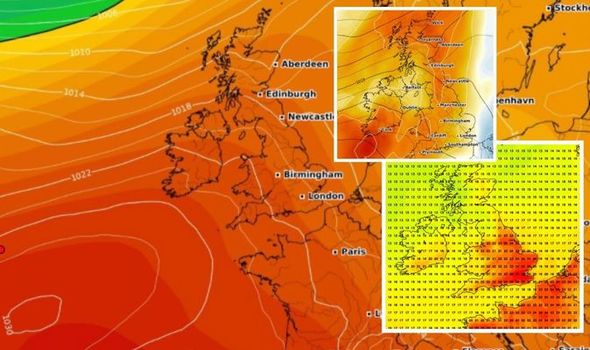 “There is a warming trend in the south later this week, certainly by the end of the week and into the weekend, with temperatures back up to into the high 20s, if not higher.”

Netweather forecasters say into Friday a band of patchy rain and cloud will continue to clear through Scotland, making its way into Northern England and across Ireland.

However, either side of this rain will be plenty more sunshine.

To the south, it’ll be much warmer, with central, southern and eastern England seeing temperatures rise into the mid-high twenties. 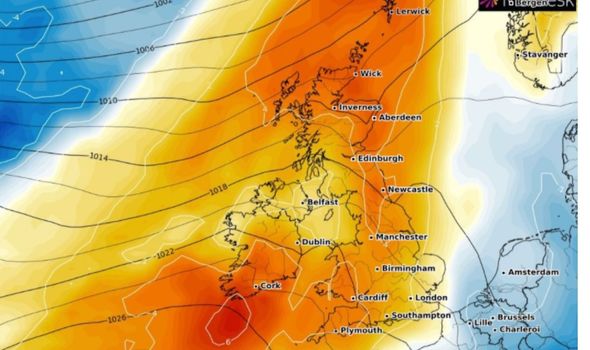 Met Office’s Greg Dewhurst said of Friday’s forecast: “There’ll be grey cloud in the Southwest which should burn back quickly to allow blue skies to return.

“This frontal system slowly pushes southwards during the day so we’ll see outbreaks of rain at times.

“It will move across Northern Ireland, southern Scotland, northern England and perhaps fringing with North Wales.

“But to the south in that sunshine a hot day to come with temperatures reaching the mid to high 20s, 28 possibly 29C towards the southeast.”

The weekend will see the front bringing the rain and cloud slowly continue to journey southeast.

During Saturday it’ll clear from Northern England and push down into Wales, the Midlands and later on, the southwest.

The rain on it will mostly be patchy by this point, but there’ll still be some heavier bursts at times.

The southeast corner will keep the very warm air, and sunny spells – although the cloud will encroach from the northwest through the day. 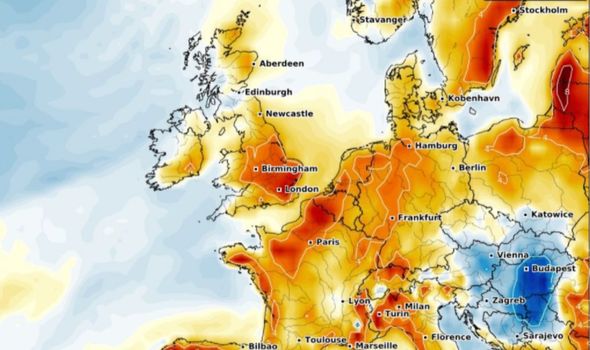 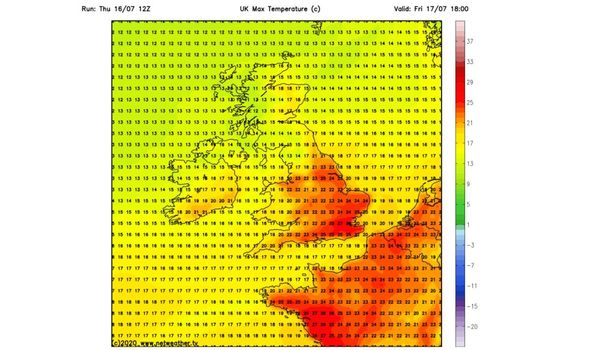 Temperatures will again rise into the mid-twenties here, while the air will be fresher and cooler to the north of the band of rain and cloud.

Mr Dewhurst said: “On Saturday, the band of rain will slowly move south so that Northern Ireland, Scotland and northern England will see a mixture of sunshine and showers.

“The southeast will see a warm day, hitting 25C while elsewhere will see highs of around 19C again.”

Mr Dewhurst said on Sunday, the rain band will track quickly towards southern England in the morning. 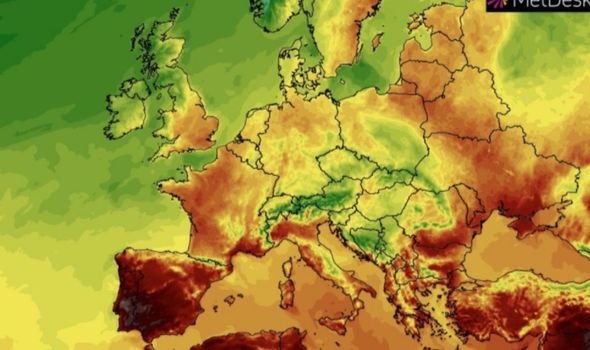 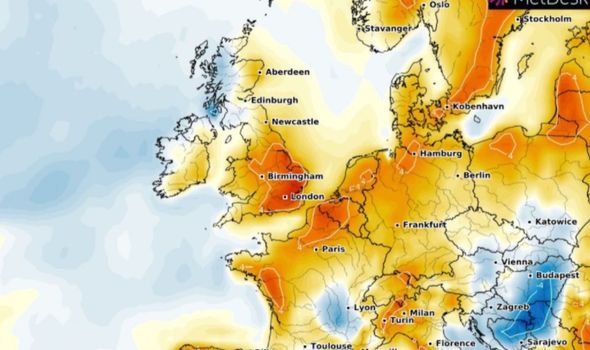 However by the afternoon it will have cleared the south coast, leaving a sunny evening behind.

Heading into next week, Tuesday will be mostly dry, though some showers will still form in the north.

Temperatures will be around average in the south, but slightly below elsewhere.

The Met Office forecasts that most areas will be mostly dry into the middle of next week, beyond which it is likely that the settled conditions will continue for many central and southern areas.

This will then bring dry weather and sunny spells here.

Northern and northwestern parts will probably turn increasingly unsettled with spells of rain accompanied by stronger winds at times.

Later in the period there is a chance that the unsettled conditions across the north may spread more widely across the rest of the UK.

Temperatures near or slightly above average but perhaps warm or at times very warm in the south.