As lockdown measures start to ease further in the UK, many of us are hoping for some warmer weather as we start to spend more time outdoors again. The Met Office is predicting highs of 23C on Thursday this week, and lots of rain for the UK on Friday, but according to weather maps things will really start to heat up later in July.

According to WXCHARTS maps, which use data from MetDesk, temperatures in the UK will start to increase next weekend.

In the week prior, much of the UK is forecast to see maximum temperatures within the ‘teens, but by Friday, July 10, many places will start seeing temperatures above 20C.

On Sunday, July 12, parts of the south-east of England will see highs of 25C, according to one chart.

On this date, other parts of eastern, northern and central England are also likely to see maximum temperatures above 20C, as will parts of Wales. 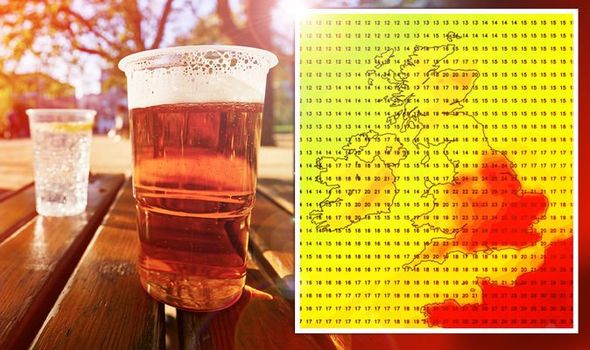 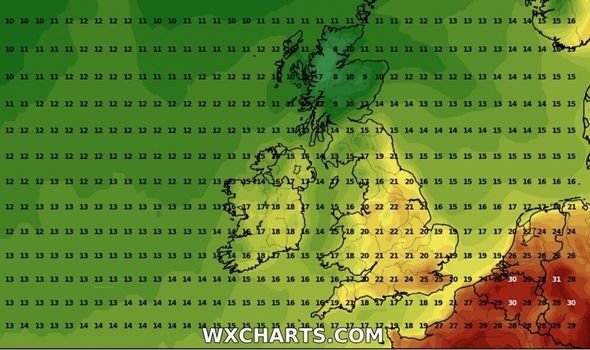 And according to Netweather maps, the hot weather will continue into the following week as well.

On Wednesday, July 15, maps show much of southern, eastern and parts of northern England with maximum temperatures soaring above 25C.

Scorching maximum temperatures of 29C could also make an appearance in parts of the south.

Around this time, weather maps show scorching heat across other parts of Europe, particularly in France, Spain and Italy, where in some places maximum temperatures are forecast to near 40C. 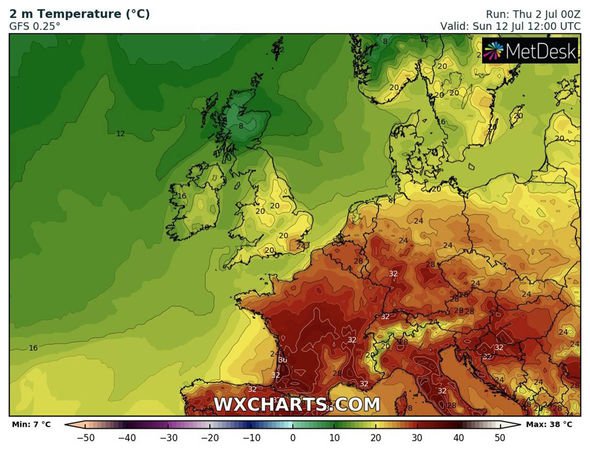 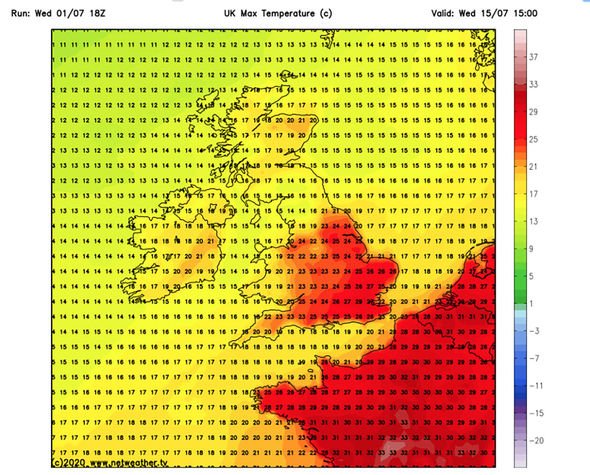 The Met Office long-range weather forecast also suggests there will be some warm weather in parts of southern England around mid-July.

The Met Office forecast from July 6 to July 15 states the start of the period will see a “general settling trend” as rain and cloud in the south and showers in the north will “give way to higher pressure from the Atlantic”.

While some showers, rain and wind could still affect the whole country during this time, the Met Office state “these are likely to be fewer and further between than of late”.

Temperatures during this period are expected to remain “around average” for this time of year, however, the south is likely to see some warm and sunny weather.

Britain to SCORCH as map shows where temperatures will rocket in July – CHARTS
UK hot weather: Return of sizzling sun in 26C July heatwave – MAPPED – MAPS
What will the weather be like in July? Maps and charts – FORECAST

The forecast reads: “Temperatures will remain around average; often rather cool in the north and in more unsettled spells, to rather warm, or even locally warm and humid, in sunnier weather in the south.”

From July 16 to July 30, the Met Office is forecasting above-average temperatures with potential “hot episodes” across the south.

The forecast reads: “Most likely continuing settled overall, but confidence in the longer range forecast is low (typical for this time of year).

“Plenty of dry, fine weather around, with the most likely scenario seeing rain increasingly moving away from the northwest bringing more prolonged settled weather here too. 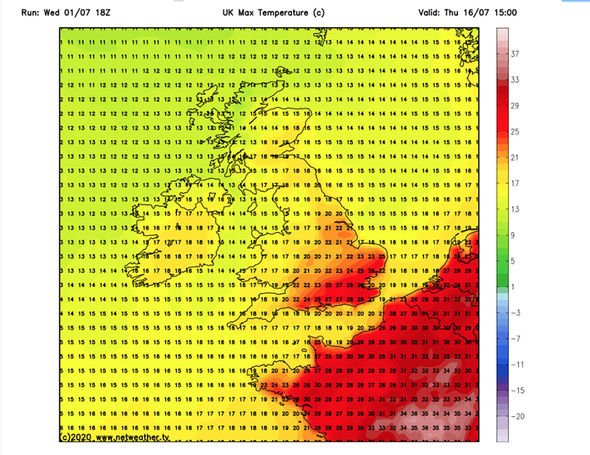 “A greater likelihood than earlier in the month of warm or even hot episodes across the south, especially south-east, with a chance, albeit still low, of thunderstorms.

“Temperatures are expected to be above average overall.”

According to bookmakers Ladbrokes, the odds are 2/1 for this July to be the hottest on record.

Alex Apati of Ladbrokes said: “Temperatures are expected to rise in the coming days and this may well go down as the hottest July on record as a result.”

He added: “As for the rest of the summer, following a scorching spring, things will only get hotter in the UK between now and the end of August and we’ve slashed odds on 2020 setting new weather records.”