According to live lightning maps from blitzortung.org and Netweather, lightning has been striking in Scotland and Ireland.

When Storm Dennis hit at the weekend, a sole lightning bolt struck the Bristol area and was likened to a “fireball explosion”.

A huge lightning bolt hit the area of Bishopston just after 9pm on Sunday, and was preceded by a freak hailstorm.

Speaking on the Emma Britton’s show on BBC Radio Bristol, a man from Horfield said: “At about 9pm I was on the phone to my brother Pete and then all of a sudden there was an incredible, what I can only call an illumination on the window pane on my front door. 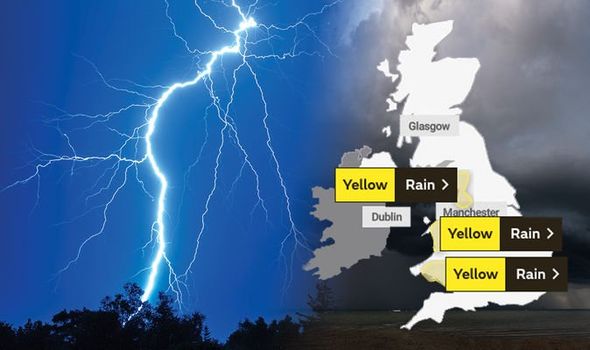 “I would describe it as a fire ball. I was just so relieved that I was on the right side of it with the door closed

“There were three strong emotions or feelings to my senses from seeing this fireball visually.

“The sound of the explosion of thunder and then the rocking of the door and the area around it. 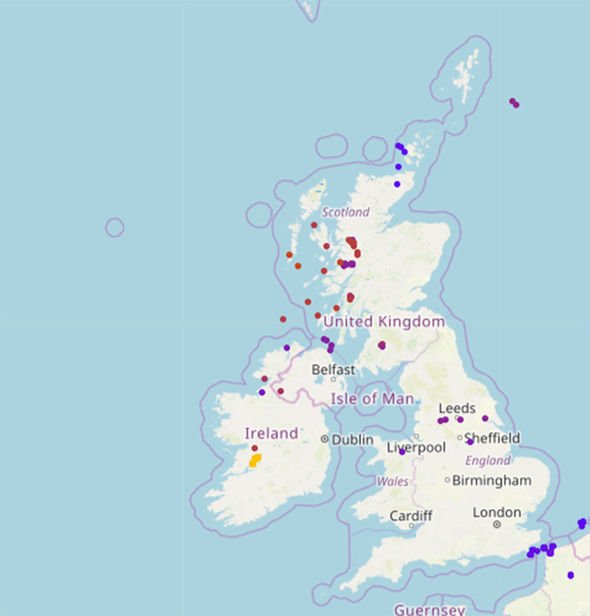 “I must say it was far far greater both in volume and magnitude than anything I have ever experienced in my life before.”

Over the next few days the Met Office are forecasting blustery showers will continue particularly in the west, these showers are likely to fall as snow over higher ground especially in Scotland over 200m in elevation.

Although there will be sunny spells for many, thunder and hail could accompany the heavier showers.

Under clear skies on Tuesday night pockets of frost are likely as more settled conditions associated with a brief ridge of higher pressure pass through.

Rain and increasingly strong winds will move in from the west on Wednesday morning spreading across the whole of the UK through the day.

Rain will be persistent and heavy at times in Wales and north western England overnight and a further front will move through on Thursday bringing heavy downpours.

There are several Met Office yellow weather warnings in place for rain across Wednesday, Thursday, Friday and Saturday.

One is in place from 6pm on Wednesday until 3pm on Thursday and is for North West England including Blackburn with Darwen, Cumbria and Lancashire.

The Met Office warns an Atlantic weather system arriving on Wednesday is expected to bring a further spell of rainfall which is likely to become heavy and prolonged over areas of high ground in parts of Northwest England. 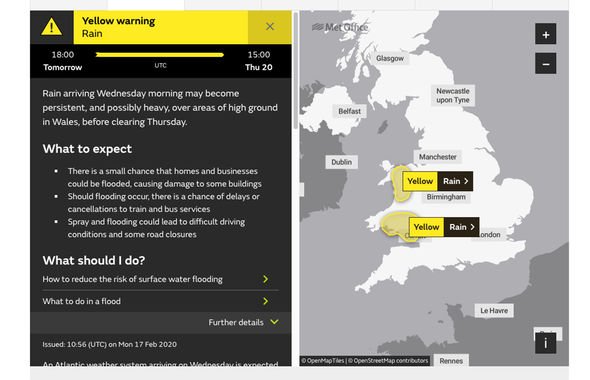 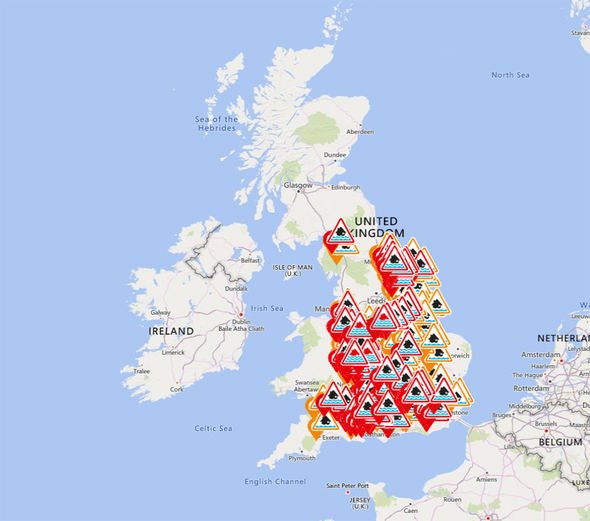 Rainfall totals of between 2.7 to 3.9 inches (70 and 100mm) are possible during the period. Given the saturated nature of the ground this may lead to some flooding.

Another warning is in place from 6pm on Wednesday until 3pm on Thursday and is for Wales.

There is higher confidence in the rainfall for north-west Wales, with between 2.7 and 3.9 inches (70 and 100mm) of rain most likely.

Given already saturated ground from Storms Ciara and Dennis, in south Wales, in particular, there is a small chance of further flooding during this event.

A third warning is in place on Friday from 12pm until Saturday at 6am for North Yorkshire, South Yorkshire, West Yorkshire and York.

The Met Office warns persistent rain, heavy over hills, may lead to flooding and travel disruption during Friday and Friday night.

Given the recent wet conditions, this brings a chance of flooding.