UK temperatures skyrocketed last month, gracing records set decades ago as Britons baked in 32C highs. While some took the opportunity to enjoy the sun outdoors, others spent days inside desperately trying to cool down. Whether they treated the occasion as a positive or negative, new forecasts suggest there is more to come in the next three weeks.

Weather charts show while July has got off to a generally routine start – with temperatures in the early to mid 20C range – they will soon increase.

Over the next week, temperatures will climb further, reaching 24C in London by 4pm on Thursday, July 7.

Maps from WXCharts show this is the start of a trend that could eventually culminate in highs close to 30C. 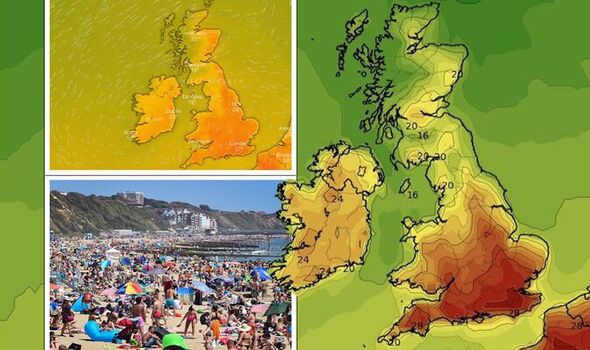 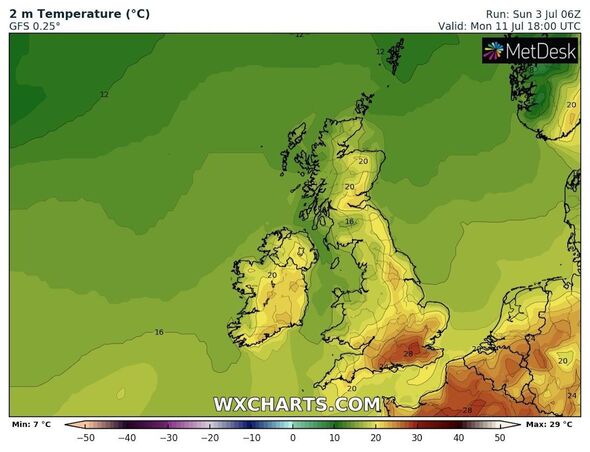 The following Monday, July 11, will welcome highs of 28C in the southeast, with London painted an angry red on charts, as are Southampton, Oxford and Cambridge.

On Tuesday, those temperatures will encompass most of England, moving north to just below Newcastle.

The climate should cool slightly to 27C, and the area shrinks by Wednesday before the most extreme temperatures take hold.

July 13 brings back 30C+ highs across southern England, with more than 20C further north to Manchester. 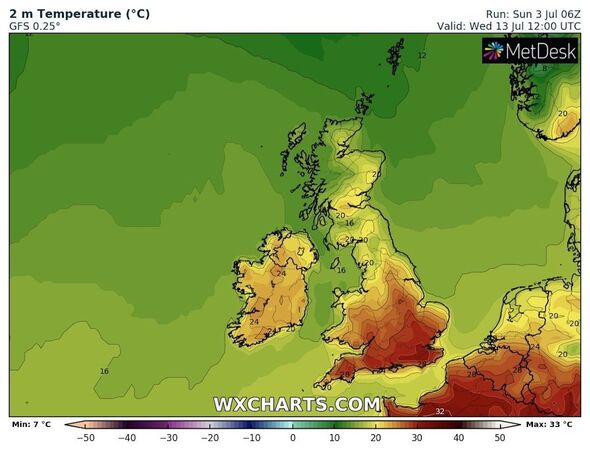 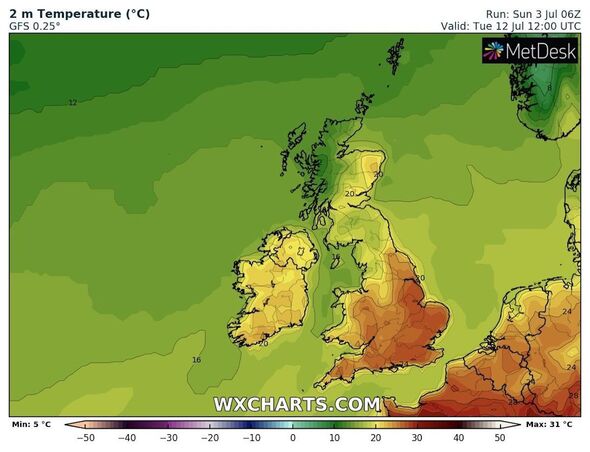 London will feel much hotter, as WXCharts show the area will rival England’s neighbours over the Channel in France.

Forecasters expect the heat will reach 32C once more, continuing the UK’s second heatwave in as many months.

That heat will depart almost as quickly as it arrives, but not until the entire country feels a blast of heat.

Until this point in July, a north-south split had kept northern England and Scotland relatively cool, around 15 to 16C, but that changes on July 14. 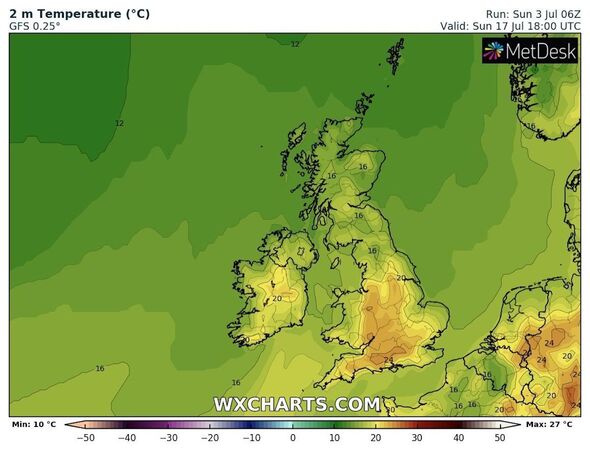 Heat will spread throughout the country by then, with 25C highs in London reaching Scotland.

Aberdeen, Inverness and Edinburgh will all feel unseasonably warm, heating around 24C each.

WXCharts reaches the upper end of its accuracy by July 19, when the north-south split returns and the hottest temperatures peak around 22C once more.

The Met Office has predicted a more scattered picture for the days from July 17 to July 31.

July will remain a “high pressure” month with “generally fine and settled” weather.

The forecast adds some “less settled weather” is scattered among those conditions “at the start of this period”.

Forecasters added: “Temperatures will be near or above normal, becoming warmer throughout July. We may see some very warm or hot temperatures, especially across the south.”