The Met Office has issued snow and ice warnings for the UK over Saturday and Sunday, and another snow warning for Monday as temperatures dip. Now Netweather and WXCharts snow risk maps show heavy snow hitting much of the UK next week.

Warnings for snow and ice are in place until 10am on Sunday, as the Met Office cautions snow will affect higher routes and lead to difficult driving conditions.

The warning is for Central, Tayside and Fife, Highlands and Eilean Siar and Strathclyde.

Wintry showers which will include snow settling away from the west coast will begin on Saturday morning and last through to Sunday. 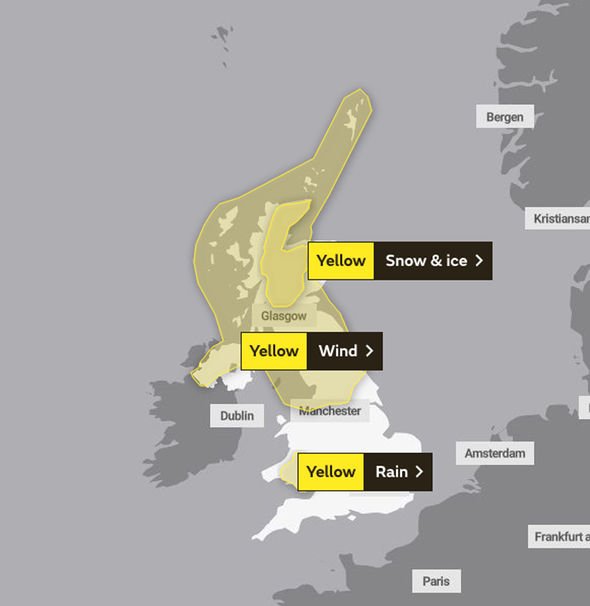 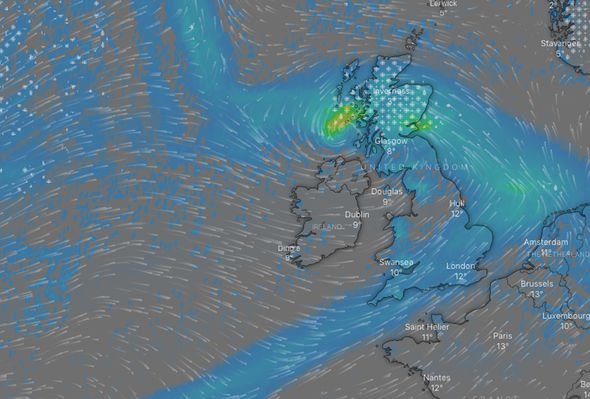 “Icy patches will be an additional hazard along with some strong, gusty winds.”

A further Met Office warning for snow is in place on Monday, for Central, Tayside and Fife, Grampian, SW Scotland, Lothian Borders, Highlands and Eilean Siar and Strathclyde.

This comes into effect at 6am on Monday and remains in place until 9pm the same day, bringing disruption to the early morning rush hour.

The Met Office warns: “Snow is expected to spread northeastwards into Scotland early on Monday, perhaps even falling to low levels during the morning rush hour across and to the south of the Central Belt of Scotland, before spreading into the rest of the warning area. 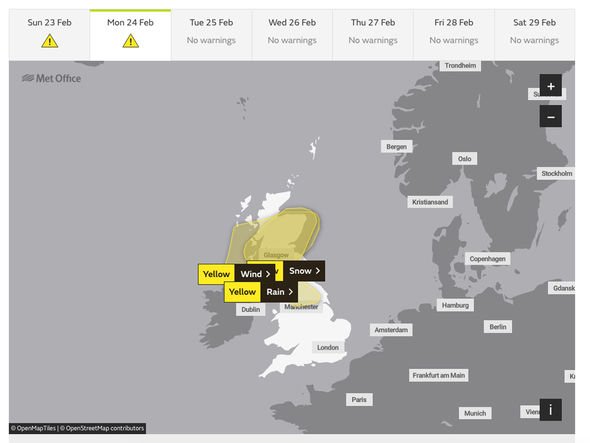 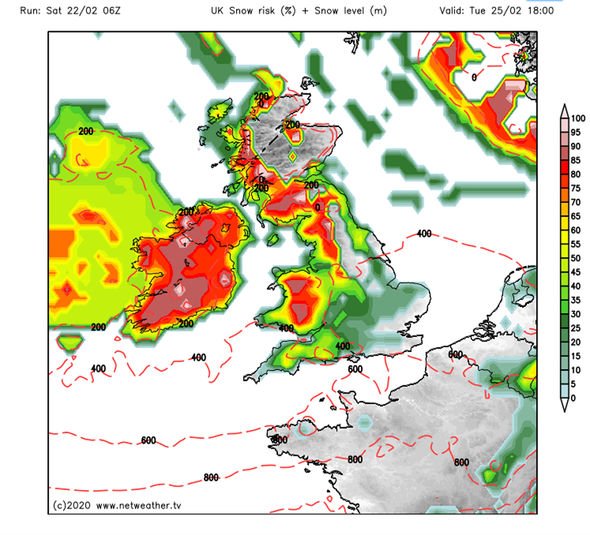 “The snow may well turn to rain in the south of the area by the end of the morning, but further north, and especially on higher routes above 300 metres, significant accumulations of snow may occur during the afternoon and evening.”

With this warning, the Met Office cautions there is a chance of some rural communities becoming cut off, services such as power and mobile phone signal may be disrupted and travel delays could occur.

Snow forecast maps from WXCharts and Netweather show further snow spreading across the UK next week, becoming heavy in some areas.

Netweather snow risk maps show snow on Monday spreading from Scotland down towards Northern England, with flurries in Wales and Northern Ireland.

On Tuesday, more snow can be seen along the west of the UK, particularly heavy to the North West, Wales and South West Scotland.

Throughout the day on Tuesday forecast maps show snow getting increasingly heavy, spreading to London and South West England, and covering the entirety of Ireland and Northern Ireland.

On Wednesday, almost the entire UK is covered by snow, with heavy patches over London, the North of England, Wales and Scotland.

Maps from WXCharts also show this pattern, with heavy snow easing towards the end of the week. 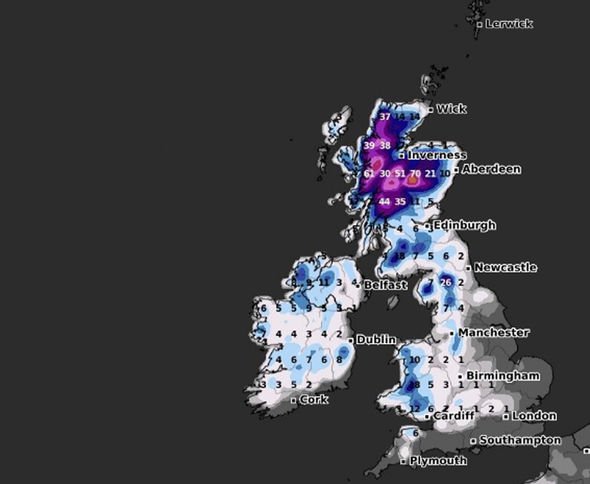 Patchy rain clearing the south by midday then sunny spells developing before rain returns to the southwest by evening.

Elsewhere sunshine and showers, frequent, blustery and wintry in the north. Windy all parts with gales in the north. Feeling colder.

The northern half of Scotland will remain windy with wintry showers.

Elsewhere there will see rain, which will be occasionally heavy, with hill snow in north spreading northeast by early morning.

In the south, it will become windy in the south with coastal gales.

On Sunday, the rain will clear all but southern England during the morning.

Elsewhere it will be brighter but wintry showers are to continue across northern Scotland where it will remain windy.

Winds will then ease in the south by afternoon.

Outlook for Monday to Wednesday

Windy with rain then showers on Monday, especially windy with hill snow for Scotland.

Conditions will continue to be windy and become colder through Tuesday and Wednesday with showers, wintry in the north.