New weather charts and forecasts predict up to 57mm of rain will fall across parts of the UK between Monday, May 10 and Sunday, May 16. WXCharts’ Total Accumulated Precipitation charts forecast up to 57mm in the Brecon Beacons in South Wales, 44mm in the north-west of England and 42mm in parts of south-west England by 11pm on Sunday, May 16.

The charts also show the central belt of Scotland will be drenched in up to 54mm of rain whilst Northern parts will see up to 24mm of rainfall.

Elsewhere, other parts of England will see more moderate conditions with 14mm across the South East, 10mm in the East and 24mm in North East.

The Met Office weather forecast for next week said rain is expected across most parts of the UK as conditions become more unsettled.

Tomorrow, forecasters say it will be a largely dry start with early bright spells and variable amounts of cloud cover. 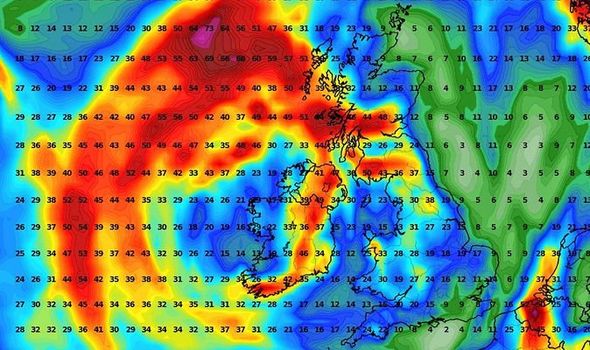 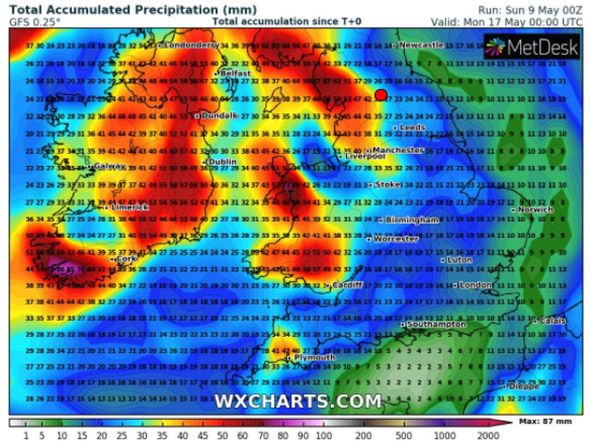 It will then be bright during the day with spells of sunshine and patchy cloud cover.

Scattered showers will develop across northern and western areas that will spread eastwards whilst others will be heavy and thundery.

The Met Outlook for Tuesday to Thursday says: “All parts likely to see a mixture of sunshine and showers, some heavy with a risk of thunder. Perhaps more persistent rain for parts of the south later.”

Temperatures will range between 8C (46.4F) and 11C (51.8F) across Scotland, Wales and Northern parts of England. 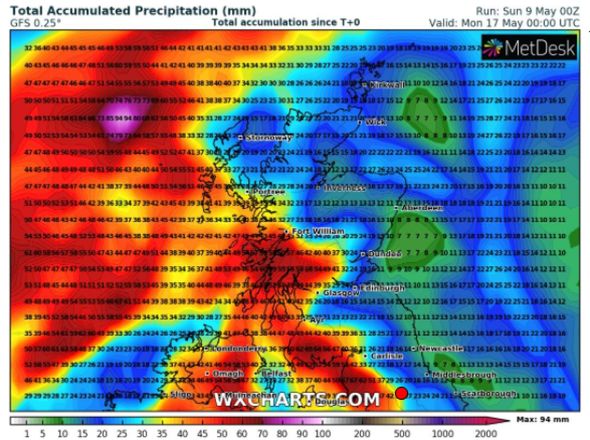 Across the South, Britons will experience slightly warmer temperatures of 14C (57.2F) in London and the south-east of England and 11C (51.8F) across the south coast.

WX Charts’ total 24 hour Accumulated Precipitation charts show up to 6mm of rain will fall in England with an average of 2mm across most parts of the UK.

In Scotland, up to 10mm will fall in parts of the Scottish Highlands whilst 5mm will occur across the central belt on Monday.

Tuesday will be bright with spells of sunshine but patchy clouds will build and showers will develop during the day, a few may be locally heavy. 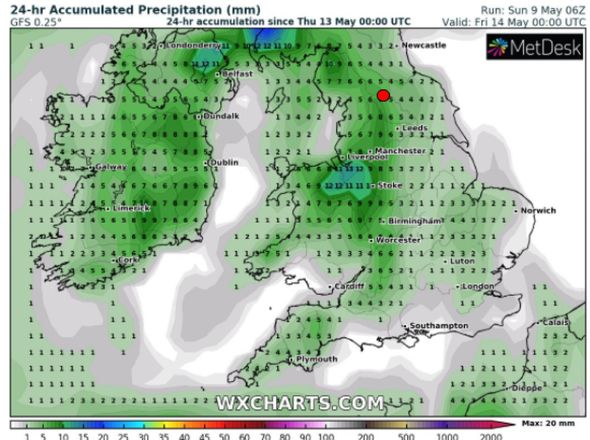 WX Charts’ total 24 hour Accumulated Precipitation charts show up to 20mm of rain will fall across parts of Northern England and the Pennies with an average of 3 to 5mm across the rest of the UK.

In Scotland, up to 18mm will hit parts of Scotland on Tuesday with an average of 2mm across the rest of the country.

Wednesday will bring further scattered showers which will be largely confined to northern and western areas but will spread eastwards later.

For Wednesday, WX Charts total 24 hour Accumulated Precipitation charts show most parts of the UK will be hit by approximately 3mm of rain whilst Dumfries and Galloway could experience showers of up to 20mm. 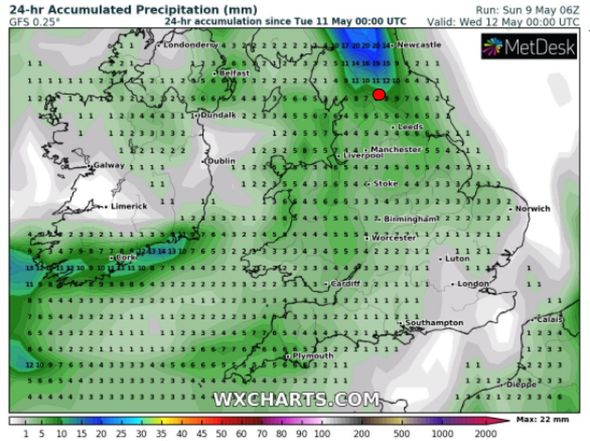 Up to 10mm could also fall across parts of the Lake District.

Later on into next week, all parts of the UK are likely to see a mixture of sunshine and showers, some heavy with a risk of thunder.

Forecasters say there could be a chance of “more persistent rain” for parts of the south.

For Thursday, WXCharts total 24 hour Accumulated Precipitation charts predict up to 12-15 mm could fall across parts of southern Scotland and the Outer Hebrides. 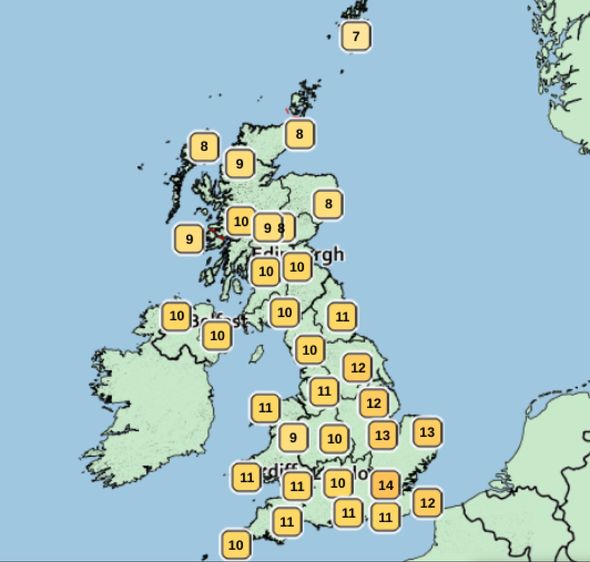 Parts of north Wales, north-west England could see between 9 and 11m of rain whilst the rest of the UK will see around 2mm.

Going into Friday, west Scotland, Wales and northern England will see the most precipitation with the charts showing between 12 and 14mm could fall in parts of the UK.

On Friday, however, most parts of the UK will experience around 1mm of rain.

Going into Saturday, up to 10mm of rain will fall across parts of southern Scotland, up to 6mm in north Wales whilst the rest of the UK will experience 1mm of rainfall.

It comes after Britons braved the heavy rain and strong winds to spend time in pub beer gardens.

According to the Met Office, the heaviest rainfall was registered in Croeserw, West Glamorgan, with 98.2mm of rain.

The village of Treherbert in the South Wales Valleys followed with 89mm of rain.