High pressure is predicted to blast dry spells and warm air into north western parts of Europe and also southern parts of England at the end of April and the start of May as a mini-heatwave arrives. Temperatures could nudge 20C in southern and eastern regions of England by Thursday, April 29, as London, Luton and Norwich see 17C, according to WXCHARTS. Further north, Leeds and York could see highs of 16C, while Stoke and Liverpool bask in 15C on the same day.

But Brian Gaze, a forecaster at Weather Outlook, predicted temperatures potentially even reaching a sizzling 21C by the end of the month as “proper spring warmth” arrives.

He added there may still be some colder spells and frost in northern regions next week before the heat arrives, however.

He told Express.co.uk: “There is likely to be some rain around, but most computer models are suggesting that high pressure will bring a lot of dry weather during the rest of the month.

“Temperatures depend on where the high pressure becomes centred. 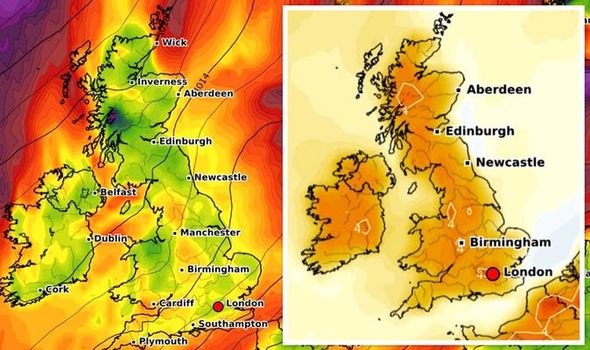 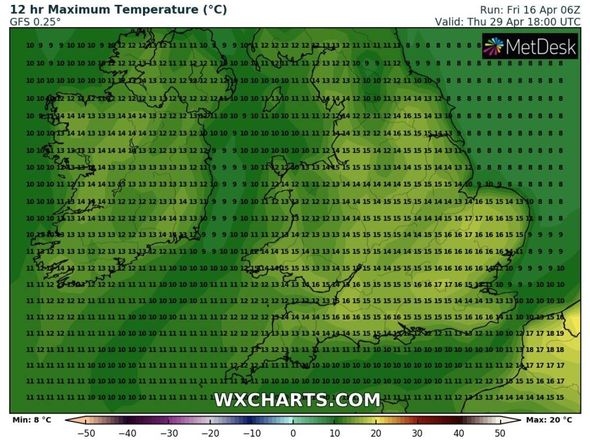 “However, the nights probably remain chilly and there could be an ongoing frost risk, particularly in the north.

“However, in the afternoon sunshine it should feel pleasant.

“The best chance of some proper spring warmth is likely to be during the last week of April, with computer models suggesting about a 30 percent chance of temperatures reaching 21C.”

The BBC’s long-range forecast also predicted a Mediterranean plume to arrive by May, as temperatures become warmer. 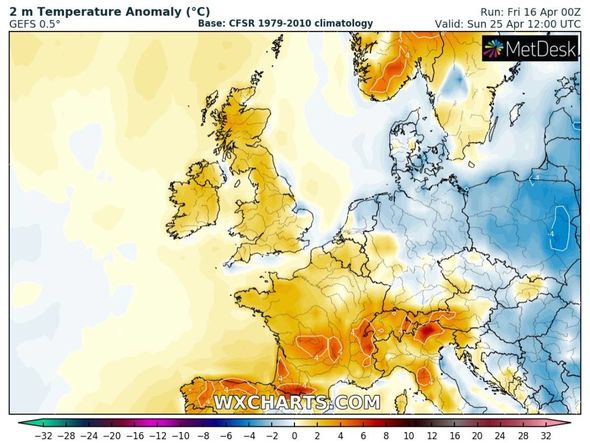 The forecast between Monday, May 3, and Sunday, May 16, said: “The tail end of April and the first part of May will be at the mercy of high pressure that should often be to the north of Europe while low pressure lingers to the south near Spain.

“The UK will be caught between these two large-scale pressure systems so we are likely to continue to see changeable weather as the weather systems jostle for control.

“Again, we see some very poor performance from the computer models, so we are leaning a bit more than usual on our historical guidance.

“There are some strong signals for high pressure to stick around nearby or overhead. 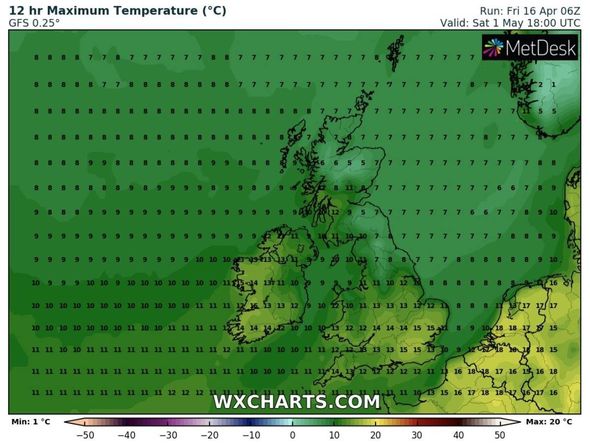 “So as we head into May we expect the weather to become increasingly settled, dry, and warm.

“The low near Spain will tend to send North African and Mediterranean air into France, and this is likely to reach southern areas of the UK too.”

The Met Office’s forecast between Wednesday, April 21 and Friday, April 30, also predicted some overnight frosts and unsettled weather to strike before warmer spells arrive at the end of the month.

The forecast said: “It will probably turn warmer, although overnight frosts are still possible in rural areas. 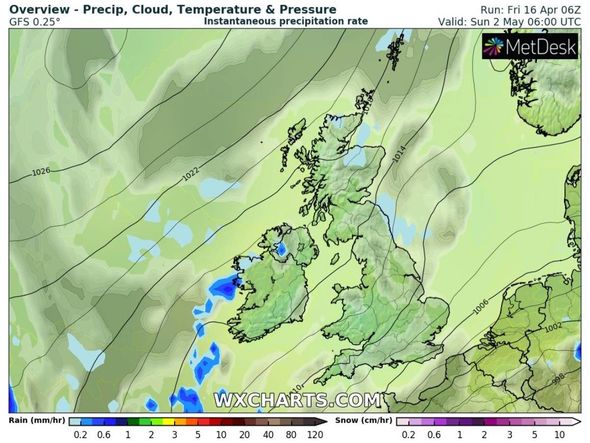 “These settled conditions are expected to persist for most places until the end of April.

“However, there is still potential for rain and strong winds to affect the northwest at times, with the possibility that these unsettled conditions may spread farther southeast.

“Mixed weather patterns, typical of spring are most likely through the end of April and into May.

“Overall, fine and dry weather is expected to be most dominant, with fair-weather cloud and plenty of sunny spells. However, all areas are likely to see some showers or perhaps some longer spells of rain at times.

“Temperatures are likely to be close to average for the time of year, with the possibility of warmer spells at times.”