The chilly weather front is forecast to be the first wave of a predicted colder-than average December. Monday morning will start briskly thanks to cold overnight temperatures from Sunday evening.

The Met Office said: “A dry bright and cold start to the day for many come Monday morning.

“A little bit more in the way of cloud across parts of the southwest but staying dry and bright through much of the morning.”

Temperatures on Monday morning will be around 1 to 4C in the UK at the lowest, according to WX Charts.

Cloud is expected to creep in on Monday bringing heavy rain. 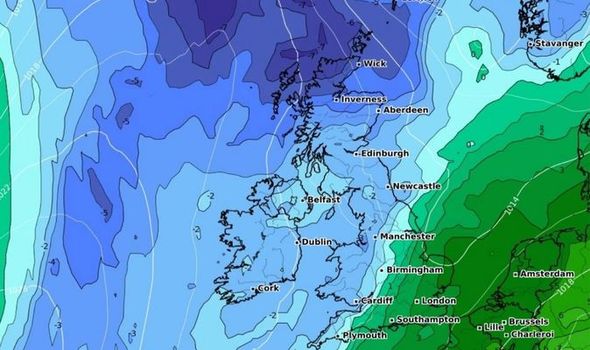 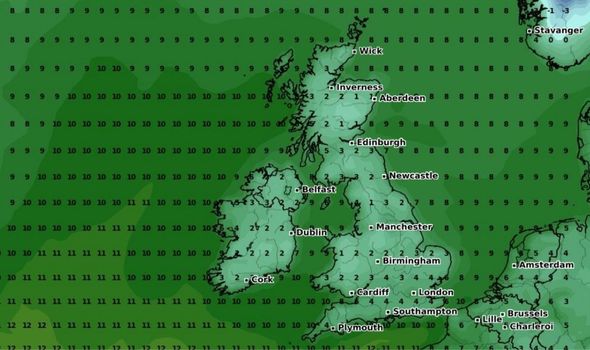 The Met office added: “Skies will gradually turn cloudier across the northwest and as the cloud thickens we’ll see some heavy outbreaks of rain across parts of Scotland and Northern Ireland.

“And it’s going to turn rather windy here too.”

The rain is forecast to linger in northwestern parts of the country and winds will strengthen.

Paul Michaelwaite, Netweather forecaster, said: “Low pressure will be closing in on the northwest, bringing outbreaks of rain and strengthening winds with it.” 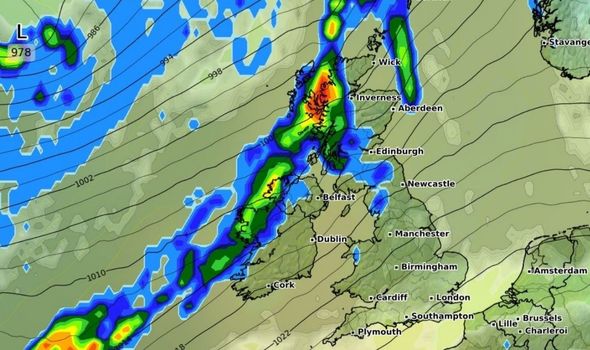 He added: “The rain isn’t going to move very far, very fast during the start of the week.

“So, it’ll be another wet 24-48 hours in the north and west of Scotland and also the west and northwest of the island of Ireland.”

On Tuesday, snow is possible over some areas of Scotland due to an incoming of cold air.

Mr Michaelwaite said: “Colder air will start to tuck in behind the front bringing the wet weather as it starts to make its move, which means some snow is possible up over the high ground of Scotland before it clears.” 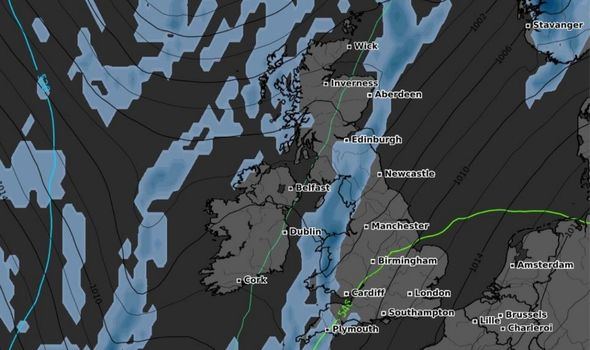 Tuesday is expected to be a wet day as rain continues to drench some areas of the country.

The Met Office said: “Looking ahead to Tuesday, the rain’s still sticking around for a time and it’s all tied in with a set of weather fronts very slowly moving their way eastwards.

“As we head into Tuesday night the rain will gradually move its way across much of the country.

“By Wednesday morning many places will have seen a little bit of rain.

“As the weather fronts clear eastwards there will be some colder air moving in behind so turning chillier from the middle part of the week. 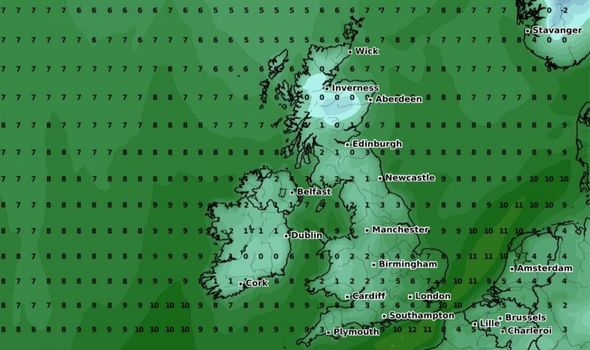 “That means overnight we’ll gradually see more of a risk of frost across much of the country and some thick fog patches too.”

On Wednesday the plunging temperatures will hit together with some showers expected in the north and west of the UK.

During the day on Wednesday, temperatures in parts of Scotland are forecast to reach as low as 1C according to WX Charts.

By Thursday morning, frost and fog is likely to hit Britain due to the plunging temperatures.

Mr Michaelwaite said: “With clearer skies and a colder airmass overhead, there’ll also the threat of some overnight frost and fog into Thursday morning – away from the still milder, and cloudier southeast corner that is.”