UK weather forecasters have laid down several warnings today, as conditions turn notably icy across the country. The Met Office expects up to eight inches of snow could fall over some regions today, with a host of potential problems on the horizon. 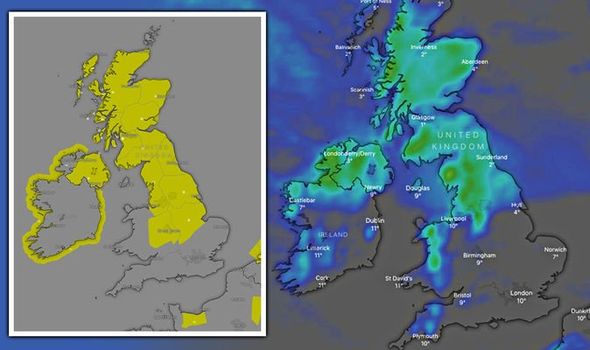 9.15am update: Flights disrupted due to Newcastle ‘snow storm’

Some flights are stuck in a holding pattern above Newcastle Airport today, as a snowstorm whips up in the area.

Low visibility has prevented planes from landing at the location, which serves nearly 300,000 people per month.

9.10am update: North wakes up to a covering of snow

Some parts of the country woke up to a thin covering of snow this morning.

BBC weather watchers posted a collection of photos from people who saw a scattering this morning.

Temperatures dipped to -1C in Leyburn, North Yorkshire, with snow also seen as early as 8am in Alnwick and Grayrigg. 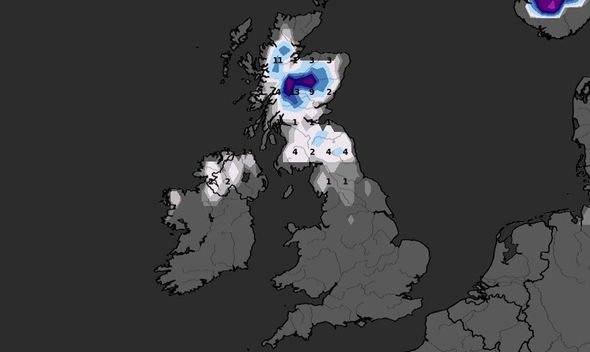 9am update: Up to eight inches of snow possible today – Met Office

The Met Office has warned significant snow is possible over some parts of the UK today.

The agency has released three warnings, covering more than 10 regions, which could see people struggling under maximums of 10cm of snow.

In the highlands, snowfall will be more pronounced, with up to 20cm (eight inches) in total over high ground.

The warning for England reads: “A band of rain reaching southern parts of northern England during Sunday night quickly turns to snow before spreading northeastwards across the rest of the warning area.”

“Across northern England, snow will then turn to rain from the south and west through the course of the morning before slowly turning to rain at lower levels over the part of the warning area in Scotland.

“At lower levels accumulations will be smaller, patchier and shorter-lived and it may be that little, if any, snow falls in some eastern coastal areas.

“A brief spell of freezing rain is possible as snow begins to turn to rain, leading to icy stretches.”

“Meanwhile, given saturated ground and recent flooding, the combination of snow melt and rain may also bring about some disruption, mainly over parts of northern England.”