Following a four-day count, during which the US leader said the election had been “stolen” from him, challenger Biden overtook his opponent in the remaining ballots. Trump’s expected defeat now sees him left open to a slew of investigations he had been protected from while in the White House. It will also see Biden become the oldest ever President as he turns 78 later this month. Since Tuesday’s election, the former vice president had been trailing Trump in the battlegrounds of Georgia and Pennsylvania leaving the result on a knife-edge.

But yesterday, due to overwhelming postal ballots in Philadelphia and Pittsburgh in his favour, he overcame a once 600,000-plus deficit to lead in Pennsylvania.

In response to the Trump campaign’s continued defiance, Biden’s team went on the offensive after days of calling for patience.

Spokesman Andrew Bates said: “As we said on July 19, the American people will decide this election. And the United States government is perfectly capable of escorting trespassers out of the White House.”

With impatient crowds starting to gather outside the building, Trump launched another furious Twitter attack.

He said: “Philadelphia has got a rotten history on election integrity.” 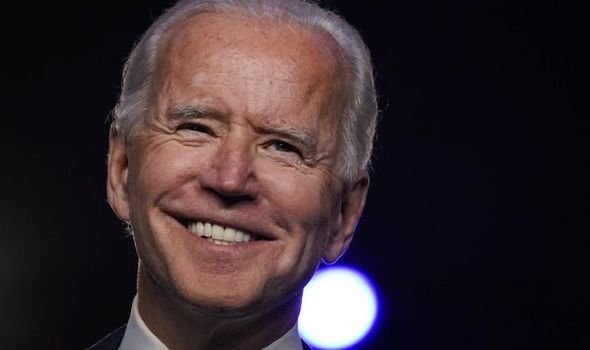 Trump then said Pennsylvania Governor Tom Wolf and the State Supreme Court had “flagrantly violated the Constitution of the US”.

Biden edged ahead with more postal ballots to be counted in Alaska, Arizona, Georgia, Nevada, North Carolina and Pennsylvania. However, Georgia has said it will be carrying out a full recount.

As Biden took the lead in Pennsylvania, solidifying his bid for the White House, a Trump campaign spokesman said: “The election is not over.

“The false projection of Joe Biden as the winner is based on results in four states that are far from over.

“Georgia is headed for a recount, where we are confident we will find ballots improperly harvested, and where President Trump will ultimately prevail.”

In Pennsylvania, Trump campaigners claimed there were “many irregularities including having election officials prevent our volunteer legal observers from having meaningful access to vote counting locations”.

They added the campaign was “denied the transparency we are entitled to under state.

As Trump continued to attack Philadelphia, Mayor Jim Kenney said: “What the President needs to do, frankly, is put his big-boy pants on.

“He needs to acknowledge that he lost. And he needs to congratulate the winner.”

Trump would join a small group of US leaders to have served just one term before being voted out.

The Pennsylvania statement came after his campaign won a court hearing in the state to have an equal amount of witnesses in the ballot counting room.

In Nevada, where Biden is also expected to win, the campaign claimed “there appear to be thousands of individuals who improperly cast mail ballots”. 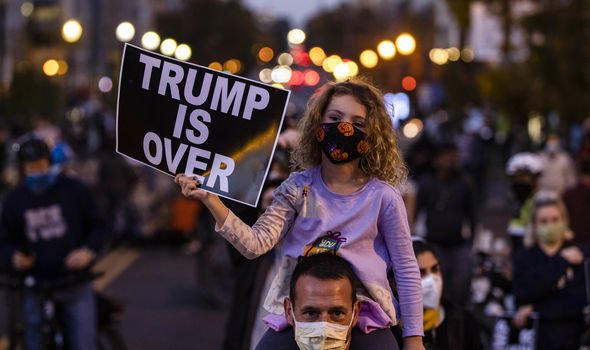 In a last-ditch effort to hang on to the presidency, the campaign pointed to Arizona.

The state was called for Biden by some US news channels on Tuesday.

But a Trump spokesman said they were “on course to win, despite the irresponsible and erroneous ‘calling’ of the state” by the news media. On Thursday, Trump had emerged from the White House to speak for the first time since Tuesday’s election night.

Trump, who has complained for months about postal votes, escalated his allegations further by saying the ballot-counting process is unfair and corrupt. 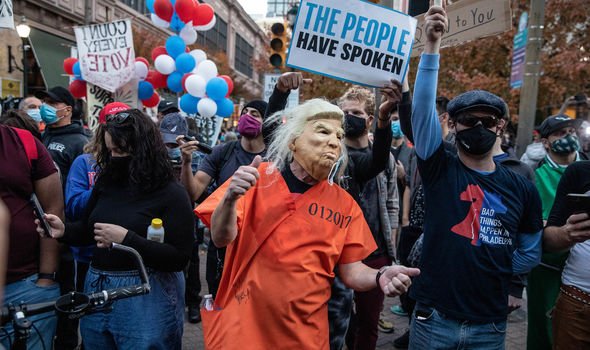 He did not back up his claims with any details or evidence, and state and federal officials have not reported any instances of widespread voter fraud.

The days since the election have seen chaotic protests in major US cities. Many furious Trump supporters had congregated outside vote counting centres.

Among the demonstrations was a huge gathering of Trump supporters in front of the Maricopa County Election Department in Phoenix, Arizona, where ballots were being counted.

Meanwhile, police in Philadelphia arrested two armed men on Thursday night who were heading to the city’s convention centre where votes were being counted. Both men were carrying handguns with a rifle found in their vehicle.