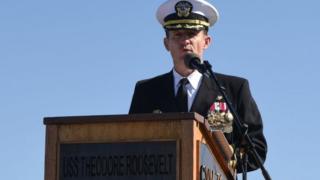 The commander of the USS Theodore Roosevelt has been removed after saying the US Navy was not doing enough to halt a coronavirus outbreak on board the aircraft carrier.

In a letter, Capt Brett Crozier had urged his superiors to act to prevent US troops dying outside of wartime.

At least 100 people aboard the vessel have been infected, reports say.

What did the US Navy secretary say?

On Thursday, Mr Modly told reporters that Capt Crozier was being fired for allegedly leaking the letter to the media.

He said the letter “created the impression the Navy was not responding to his questions”.

Uninfected members of the ship’s more than 4,000 crew are now being quarantined in Guam after the governor of the US island territory in the western Pacific Ocean said they could stay as long as they had no interactions with locals.

Until now, the sailors had been restricted to the naval base’s pier.

What about Capt Crozier’s letter?

He had warned the Pentagon that the outbreak aboard his ship was “accelerating” because crew members were living in confined spaces.

“We are not at war. Sailors do not need to die,” stated the four-page letter, dated 30 March.

Capt Crozier had called for “decisive action”, saying uninfected sailors had to be removed from the ship and isolated.

The letter was later published by the San Francisco Chronicle.

What has the reaction been?

In a statement, Democratic leaders of the House Armed Services Committee said: “While Captain Crozier clearly went outside the chain of command, his dismissal at this critical moment… is a destabilising move that will likely put our service members at greater risk and jeopardise our fleet’s readiness.”

“Throwing the commanding officer overboard without a thorough investigation is not going to solve the growing crisis aboard the USS Theodore Roosevelt.”