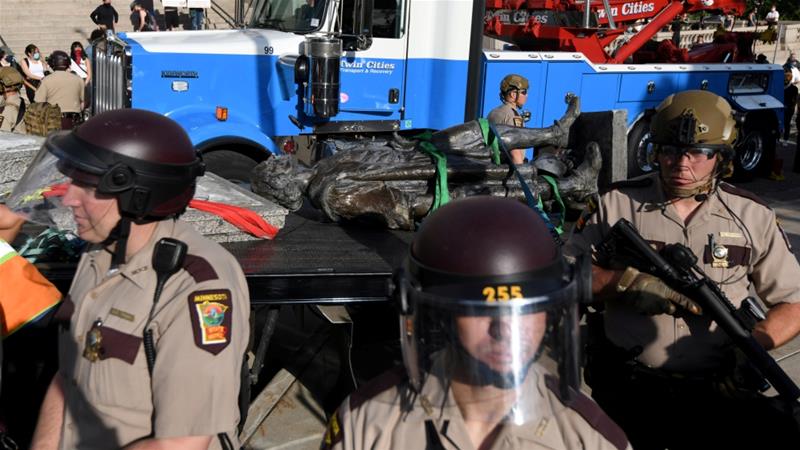 Hundreds of unarmed National Guard troops have been activated and on standby in Washington, DC, to assist law enforcement personnel with protecting historical monuments in the United States capital, officials said on Wednesday, after protesters tried to tear down a statue of Andrew Jackson in a park near the White House and threatened others in the city.

Calls for the removal of monuments and statues, coming on the back of enormous Black Lives Matter protests earlier this month, were sparked by the May 25 death of George Floyd, a Black man killed in police custody in Minneapolis, Minnesota.

Last night, a Democratic State Senator was viciously beaten and the “Forward” statue–a symbol of Wisconsin’s progressivism–was torn down. This morning, Democrats and progressives are only tepidly criticizing these “protesters.” And that tells you everything you need to know. https://t.co/Zpf81aNnjh

Meanwhile, in the Midwest state of Wisconsin, Governor Tony Evers said on Wednesday he was prepared to activate the National Guard to protect state properties after protesters outside the Wisconsin Capitol tore down statues commemorating an abolitionist and women’s rights and threw a Molotov cocktail into a government building during a night of violence that also included an attack on a state senator.

The violence broke out on Tuesday night as a group of 200-300 people protested the arrest of a Black man who shouted at restaurant customers through a megaphone while carrying a baseball bat. Officers inside the Capitol used pepper spray to repel protesters who were trying to break into the historic centre of state government, Madison police said.

“What happened in Madison last night presented a stark contrast from the peaceful protests we have seen across our state in recent weeks, including significant damage to state property,” Evers said in a statement.

Protestors in Washington, D.C. tearing down a statue of Andrew Jackson, the president responsible for the Trail of Tears and a hero to President Trump. Video courtesy of ⁦⁦@jonathanchase_⁩ pic.twitter.com/MH2t4m7MT9

The activation of about 400 National Guard troops in Washington, DC, came after a request from the interior secretary, a National Guard statement said.

“They will support US Park Police at key monuments to prevent any defacing or destruction,” the statement said.

It said none of the troops had been moved to the streets, but that they were on standby at a National Guard Armory.

A US official said the activation was seen as a short-term move through the first week of July that would give the Department of Justice enough time to call on additional federal law enforcement personnel.

Late on Monday, protesters tried to topple a statue of former President Andrew Jackson facing the White House. Jackson served two terms in the White House, from 1829 to 1837, espousing a populist political style that has sometimes been compared with that of President Donald Trump.

Native American activists have long criticized Jackson, a Democrat, for signing the 1830 Indian Removal Act, which led to thousands of Native Americans being driven from their lands by the US government.

Trump has pledged to take a hard line on anyone destroying or vandalising historical US monuments and threatened to use force on some protesters.

I have authorized the Federal Government to arrest anyone who vandalizes or destroys any monument, statue or other such Federal property in the U.S. with up to 10 years in prison, per the Veteran’s Memorial Preservation Act, or such other laws that may be pertinent…..

On Tuesday night, protesters gathered in a park not far from the US Capitol building and demanded a statue there celebrating the Emancipation Proclamation that freed Black Americans from slavery be removed. The statue depicts a Black man kneeling at the feet of President Abraham Lincoln, who is offering his outstretched hand in support.

The bronze memorial in Lincoln Park, designed by sculptor Thomas Ball, was erected in 1876 and built with funds solicited exclusively from freed slaves, according to the National Park Service. Black statesman Frederick Douglass spoke at the statue’s dedication in 1876 but is said to have been a critic of the imagery it depicts.

The designers of the Emancipation Statue in Lincoln Park in DC didn’t take into account the views of African Americans. It shows. Blacks too fought to end enslavement. That’s why I’m introducing a bill to move this statue to a museum. pic.twitter.com/A0MOnISH1N

Washington‘s only member of Congress said she would introduce legislation seeking to have the statue removed and placed in a museum.

“Although formerly enslaved Americans paid for this statue to be built in 1876, the design and sculpting process was done without their input, and it shows,” Norton said in a statement released on Tuesday.