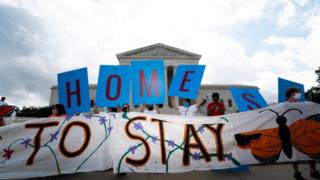 Once again the Supreme Court has ruled that a controversial action by the Trump administration is illegal. And once again the biggest stumbling block for the White House isn’t that their officials lacked the power to do what they want, it’s that they went about it the wrong way.

The Justice Department’s attempt to rescind Daca, the Obama-era programme that provides normalised immigration status to some undocumented immigrants who entered the US as children, was “arbitrary and capricious”, the court held, in a way prohibited by federal law.

That mirror’s the court’s conclusion in a decision last year blocking the Trump administration’s efforts to include a citizenship question on the decennial US census.

Both opinions were written by Chief Justice John Roberts, whose technicality-minded devotion to a 1946 federal law unglamorously called the Administrative Procedures Act, is presenting an imposing obstacle to the administration’s policy objectives.

“We do not decide whether Daca or its rescission are sound policies,” Roberts wrote, noting that the administration simply did not provide proper legal justifications or make appropriate considerations when it tried to act.

Lower courts have cited the procedures act to throw up similar roadblocks to other Trump administration moves, particularly in the realm of environmental policy. The president’s political opponents have found that an executive branch not always meticulous about the details has presented plentiful legal lines of attack.

What does it mean for the election?

While the Trump administration waged a lengthy court battle to have its Daca order upheld, there may be a few sighs of relief from the president’s campaign over this ruling.

A Trump win would have pushed hundreds of thousands of Daca recipients into the economic shadows or onto deportation rolls just months before the election. It would have put a sympathetic human face on the targets of administration’s hard-line immigration policies.

Instead, this becomes another somewhat theoretical campaign issue.

What does it mean for ‘Dreamers’?

A re-elected Trump could make another run at Daca in his second term, putting the programme once again at risk. With four years under their belt, Trump officials may have learned a bit more about how to navigate the treacherous waters of administrative procedure.

The president says the ultimate goal is to eventually provide Daca-like protections, but only as part of reform that accomplishes his larger objectives of limiting undocumented migration and restructuring the US immigration system.

Meanwhile a President Joe Biden would have four years to further establish the programme – and push for Congress to come up with the permanent legislative solution that eluded his former boss, Barack Obama.

In the meantime, the Supreme Court has given Daca recipients a reprieve, albeit on a technicality, leaving their ultimate fate still far from certain.