Donald Trump, flanked by his wife Melania, has walked out of the doors of the White House for the last time. Ahead of Joe Biden’s inauguration this afternoon, Mr Trump is leaving the White House with a huge legacy – although not necessarily a positive one – as well as a record of becoming the only president to be impeached twice.

Speaking ahead of his final exit from the White House, Mr Trump said: “As I conclude my term as the 45th President of the United States, I stand before you truly proud of what we have achieved together. We did what we came here to do — and so much more.”

He added: “Now, as I prepare to hand power over to a new administration at noon on Wednesday, I want you to know that the movement we started is only just beginning.

“There’s never been anything like it. The belief that a nation must serve its citizens will not dwindle but instead only grow stronger by the day.

“As long as the American people hold in their hearts deep and devoted love of country, then there is nothing that this nation cannot achieve.” 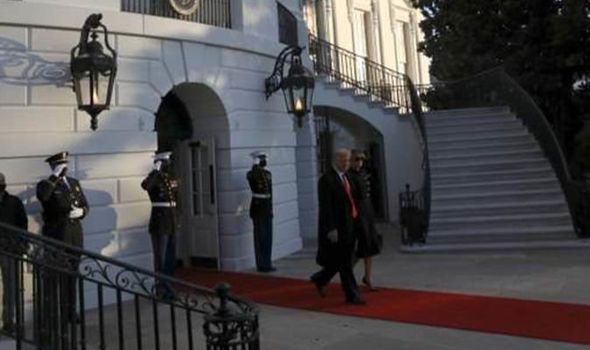 Where is Mike Pence?

Mike Pence was notably absent from the President’s exit from the White House today.

The former Indiana governor, 61, has been one of Mr Trump’s staunchest allies and friends since 2016.

The pair had a close relationship until earlier this month when Mr Pence refused Mr Trump’s request to ensure the House of Representatives would reject the certification of Mr Biden’s election victory.

The soon to be former President called Mr Pence’s actions a betrayal to the American people in a damning statement.

In a tweet, he said: “Mike Pence didn’t have the courage to do what should have been done to protect our Country and our Constitution, giving States a chance to certify a corrected set of facts, not the fraudulent or inaccurate ones which they were asked to previously certify.” 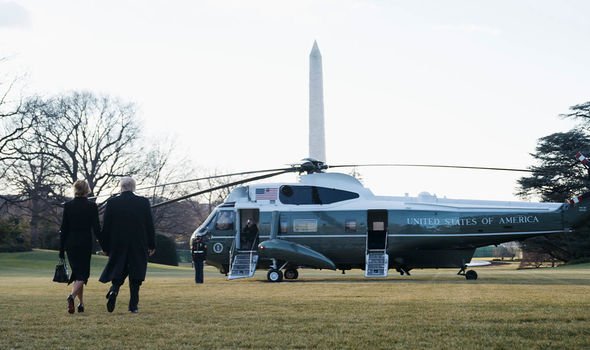 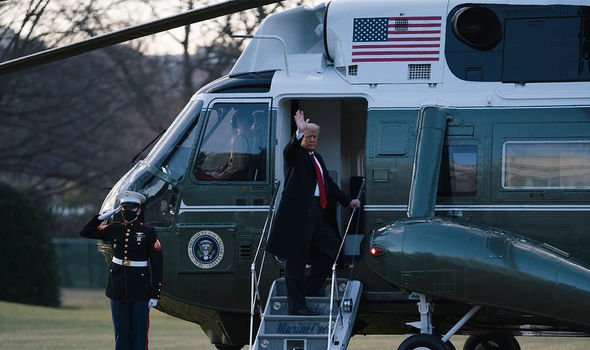 Despite the comments made against him, however, Mr Pence resisted pressure from Democrats to invoke the 25th Amendment to immediately remove Mr Trump from office following the January 6 riot at the US Capitol.

While it is not known where Mr Pence is right now, he will stand-in for his boss at the inauguration ceremony today.

Mr Trump has refused to attend the swearing in and instead has left Washington, becoming the sixth President to snub his successor.

Marine One has just taken off from the White House lawn as Mr Trump is now returning to his home in Florida, Mar-a-Lago.

Following the service, Mr Pence will no longer hold the political office of Vice President, which will transfer to Kamala Harris.

Michael D’Antonio, co-author of The Shadow President: The Truth About Mike Pence, told the Guardian: “I think he would want to stay involved in Republican politics and probably in a more conventional way than the president.

“When he was on the radio in Indiana, he called himself ‘Rush Limbaugh on decaf’. There is a lot of potential in that identity for him.” 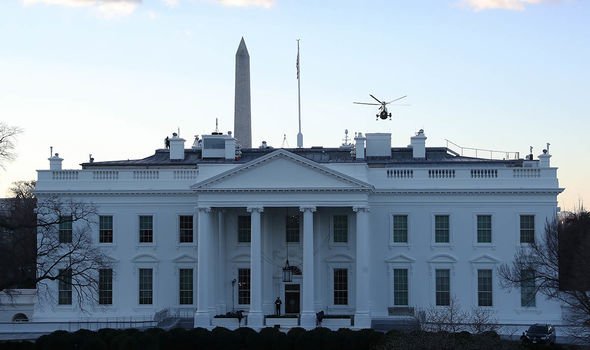 According to the latest odds from Betfair Exchange, Mike Pence at 9/1 is the Republican party’s best hope of victory in 2024, with Trump 10/1 to win.

Betfair spokesperson Sam Rosbottom said: “Joe Biden is tipped to enjoy his moment in the spotlight during his inauguration speech with a 20-25 minute address the 6/4 favourite with Betfair, remarkably longer than Trump’s 16-minute speech four years ago.