TOKYO (Reuters) – As the virus-stricken Diamond Princess cruise ship is evacuated, Japan faces deepening criticism over its response to the outbreak, tarnishing what was supposed to be a triumphant Olympic year for Prime Minister Shinzo Abe. 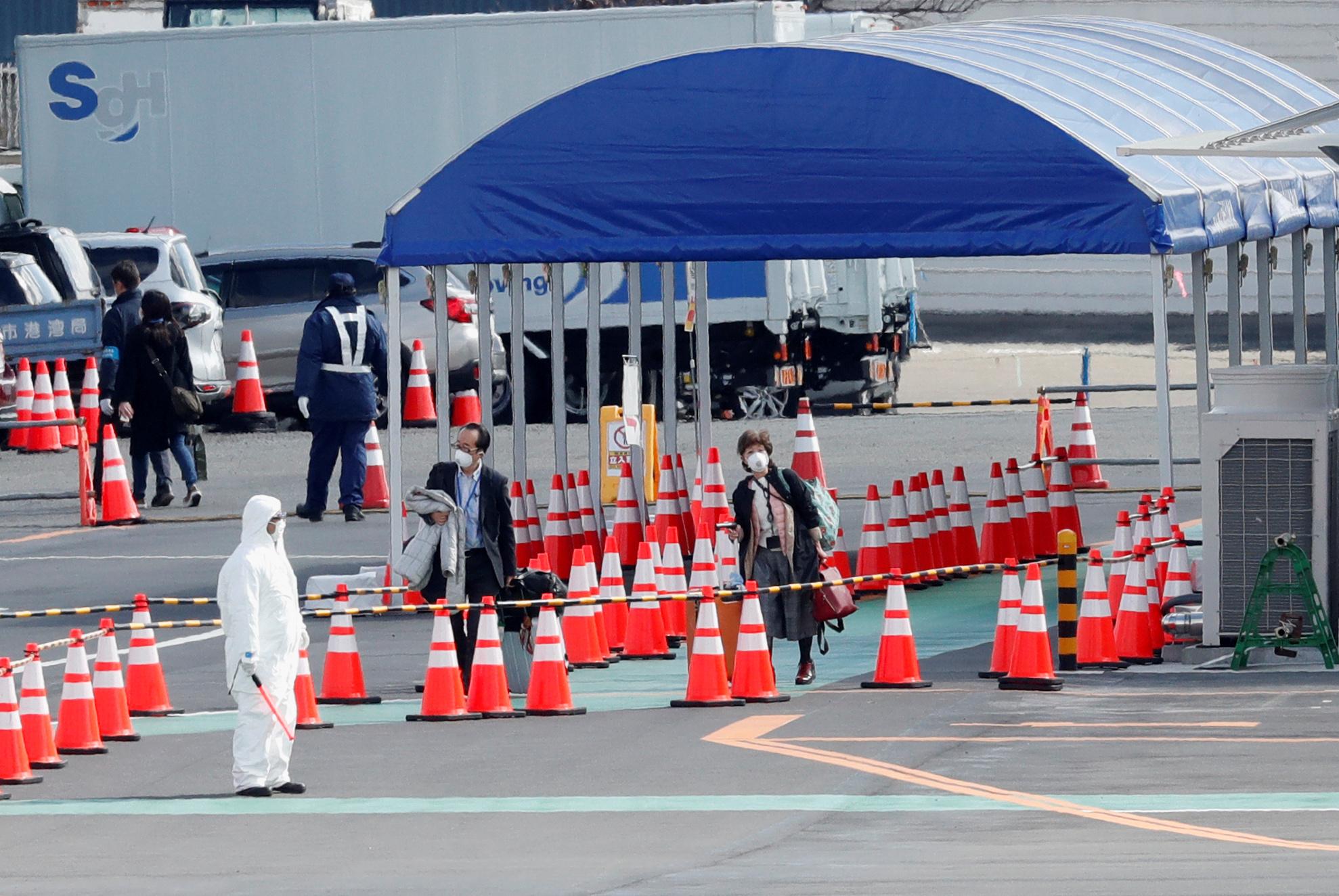 More than 540 people onboard have been infected with the coronavirus, the most outside of China. The United States evacuated more than 300 citizens from the ship on Monday, and more countries are following suit.

But as the crisis off the coast of Yokohama winds down, focus now turns to Tokyo, where critics say the government’s response has seemed more concerned with managing public perception than the outbreak. They say the ship quarantine may not have been effective.

Japan is just months away from hosting the 2020 Olympic games. For some Japanese, the outbreak carries an uneasy echo of the 2011 Fukushima nuclear meltdown, when the government was widely criticized for downplaying another crisis.

“The spread of the virus is wider than the government said,” said Shinichi Niwa, an adjunct professor at Fukushima Medical University. “During the (Fukushima) disaster, the government said there was no meltdown. So they hid the truth at the time, and I’m afraid the same situation is happening with the coronavirus.”

The health ministry did not respond to requests for comment. The government has repeatedly said its response has been appropriate, and some prominent doctors have defended it.

“Epidemiological evidence shows that our isolation strategy worked,” Shigeru Omi, president of the Japan Community Healthcare Organization, told reporters at a recent briefing. “Almost 4,000 people stay on this ship, which is not designed for isolation for several weeks, and this is a very challenging situation.”

The U.S. Centers for Disease Control and Prevention (CDC) has praised Japan’s “extraordinary efforts” in the quarantine but said it may not have been sufficient to prevent transmission.

The U.K.-flagged Diamond Princess arrived in Yokohama on Feb. 3 with roughly 3,700 people onboard after a man who disembarked last month in Hong Kong was diagnosed with the virus.

From the start, experts raised questions about the quarantine process. Unlike the United States, Japan does not have a central disease-control agency.

Passengers weren’t confined to their rooms until Feb. 5. The day before, as officials screened them, onboard events continued, including dances, quiz games and an exercise class, one passenger said.

Meanwhile, the virus spread onboard, most likely by people within their own cabins or by asymptomatic crew members interacting with passengers, experts said.

“How is this quarantine going to be lifted when there is practically continuous exposure?” said Eyal Leshem, director of the Center for Travel Medicine and Tropical Diseases at Sheba Medical Center in Israel. “It doesn’t make sense epidemiologically.”

Japan also let people off the boat piecemeal, including those over age 80 who tested negative, which experts said went against common protocols.

The contagion may have been fueled below deck, where the crew of about 1,100 worked and slept in cramped quarters, sharing living spaces and bathrooms.

“The terror of the coronavirus is increasing at every moment,” Indian crew member Binoy Kumar Sarkar said in a Facebook video posted on Feb 7. “I request the government to take us out of here and isolate us. We should be screened and isolated.”

Some have said Japan should have quarantined passengers on land.

“Quarantine on ship may be increasing risk of infection and creating a barrier to accessing medical care,” said Esther Chernak, an associate clinical professor and director of the Center for Public Health Readiness and Communication at Drexel University in Philadelphia.

A Kyodo news agency poll over the weekend said 53 percent of respondents weren’t happy with how Abe had handled the situation.

“The Diamond Princess has proved a bit of a blind spot for us,” a lawmaker from Abe’s ruling party told Reuters, speaking on condition of anonymity because of the sensitivity of the matter. “But beyond that, there isn’t a big problem for Japan with the coronavirus.”

Early on, the health ministry said cases on the ship would not count toward Japan’s domestic tally of infections, in line with World Health Organization guidelines. But some experts said it also showed how Japan wanted to avoid the stigma of being seen as a virus hotspot.

“I like to believe that public health decisions were driven by science and not influenced by politics,” said Mark Kortepeter, a professor at the University of Nebraska College of Public Health. “But I am not naive, having worked in this space for decades. If that was the impetus, then it backfired.”