A group of Yazidis, mostly children, reunite with their families after returning from last ISIL-held pocket in Syria. 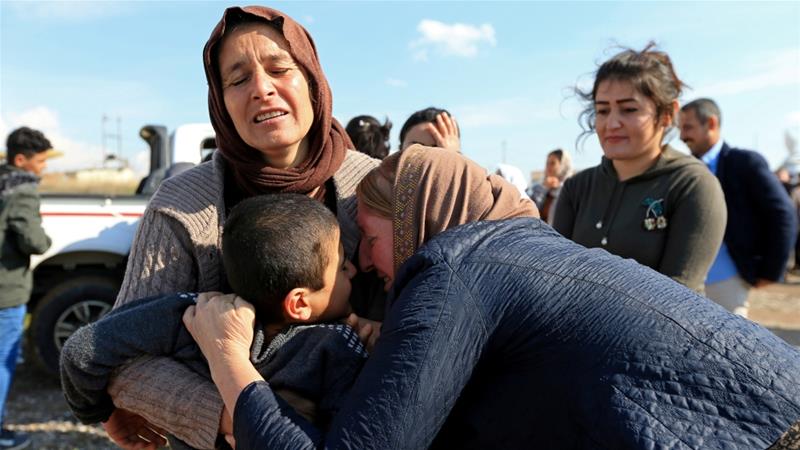 A group of Yazidi women and children are reunited with their families in Iraq after five years in captivity at the hands of ISIL group fighters.

They hug and kiss relatives in emotional scenes that underscored their years-long ordeal and that of their devastated community.

Elated families met their loved ones at a rural truck stop on the road between Sinjar and Dohuk on Saturday, tossing candies in the air like confetti, the women ululating with joy.

The 18 returning children, aged 10 to 15, appeared weary and at times uneasy with the attention of the media and officials.

One teenage boy collapsed in his aunt’s arms and broke down in tears. Few parents were there to receive their children – many are still missing in territory held by the Islamic State of Iraq and the Levant, also known as ISIS, or have been confirmed killed. Other parents have already sought asylum in Western nations, in the hopes, their children will be able to follow them.

Still, the children could not hide their joy at being hugged and kissed once more by their relatives after the long and traumatic separation.

They included 11 boys that many fear were trained in military camps run by ISIL, though they all denied it.

Only days since escaping the group, which is now on the brink of defeat, the children were struggling to come to terms with their ordeal.

“They treated us well,” said 13-year-old Milad Hussein Khalaf. He said the fighters separated him from his family when they were abducted in 2014 and sent the then-eight-year-old to be raised by an ISIL family.

About 3,000 Yazidis are still missing after ISIL fighters stormed their communities in the Sinjar region in northwest Iraq in 2014, and enslaved, raped and killed thousands of worshippers of the esoteric faith. ISIL considers the Kurdish-speaking religious minority to be heretics.

‘They were all victims’

The group of three Yazidi women and 18 children who reunited with their families are among thousands of civilians who emerged in the last few days from the last speck of territory held by the ISIL in the village of Baghouz in northeastern Syria.

They crossed into Iraq from Syria on Friday, and were picked up by their families on Saturday.

Khalaf’s older cousin, Siri Ali, used a video chat app on her phone so her sisters in Canada could see him arrive. She said Khalaf does not know that his parents are still missing.

“Thank God, they have returned and they are among us. This child does not have a mother or a father. We are going to be his parents,” said Khalaf’s other cousin, Noura Ali.

“We thank all the sides that worked together to rescue them, and we hope that the rest of the missing people will return.”

Also among the arrivals was 10-year-old Dilbar Ali Ravu. He looked slightly stunned, but also could not hide his joy. His uncle, Jihad Ravu, said Dilbar developed lesions on his face while he was being held in a cell in Tal Afar in the early days of his captivity after he was abducted five years ago.

He also says Dilbar has not received proper medical treatment since then.

Susan Fahmy, a coordinator for the NGO Khalsa Aid, said she is certain all the boys were sent to training and that they need years of rehabilitation.

She said some Yazidi boys have been caught communicating with ISIL a year after they returned, and also said women are being pressured to give up their children fathered by ISIL men.

Hosni Murad, the brother of Yazidi activist Nadia Murad, who received the Nobel Peace Prize for her advocacy on behalf of victims of wartime sexual violence, was there to welcome home his 10-year-old nephew, Khashman Samir.

Samir’s four siblings and his parents were all killed by the ISIL fighters, said Murad.

“They were all victims of Daesh,” he said, using the Arabic acronym for the group. “He’s the first and the last one to return from the family.”

Murad believes many young men are returning to the community harbouring sympathies for the group.

“Yes, in truth, we’re afraid they’ll do something. Their mindset is Daesh. I mean it’s been five years they’ve been training with them,” he said. 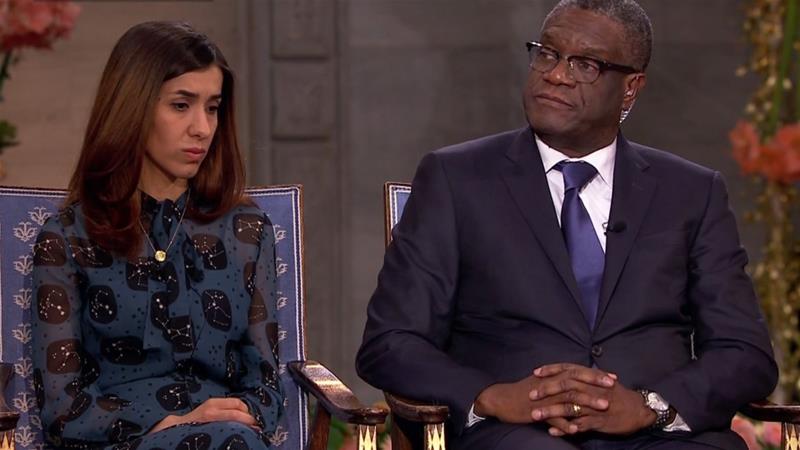